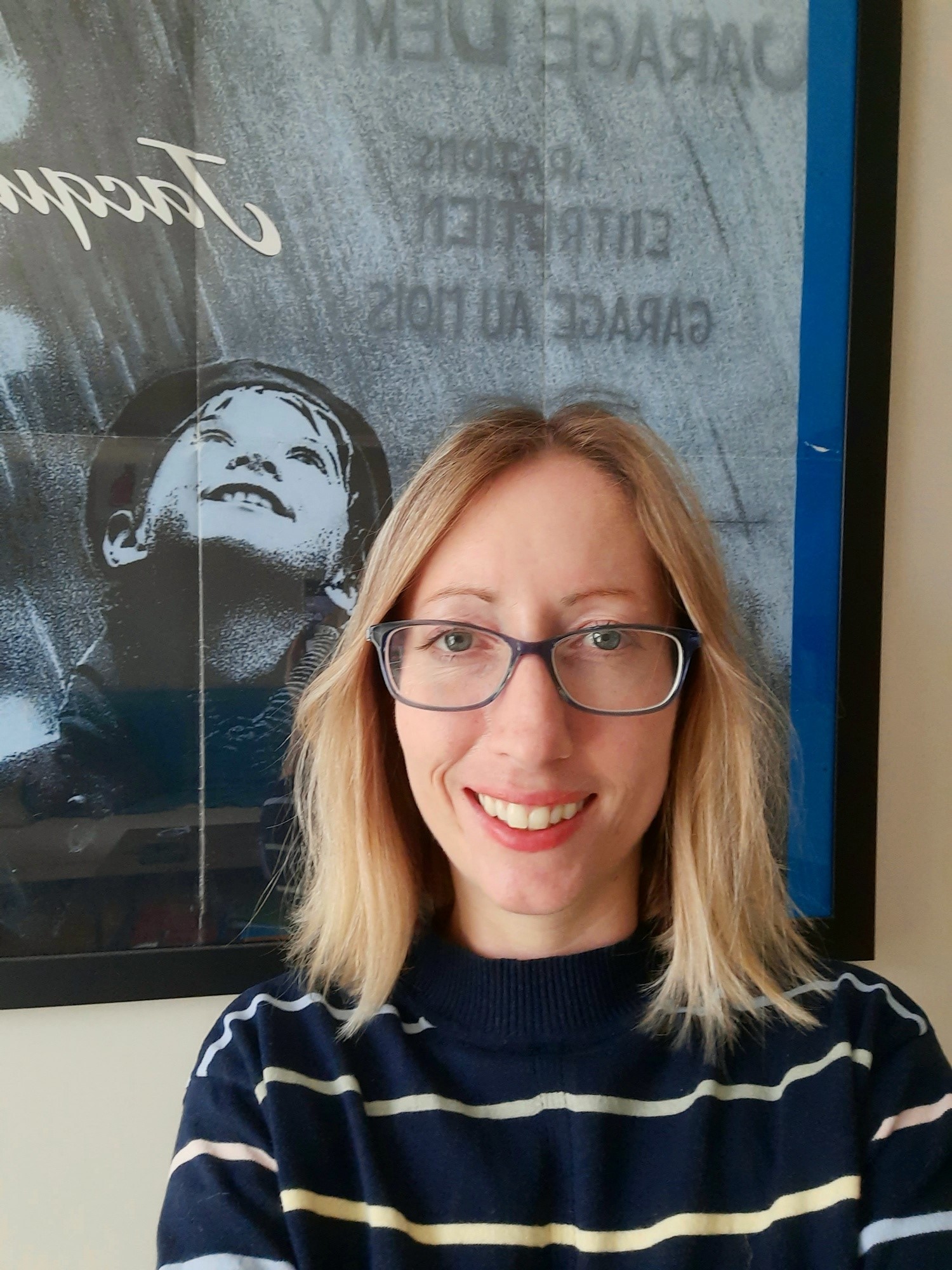 Albertine is currently developing a book project on listening spaces and the face-to-face encounter in documentaries from the Francophone world.

Albertine joined the Department of French at Bristol in 2017 after taking up a 3-year Junior Research Fellowship at Churchill College, Cambridge. Before this, Albertine completed her AHRC-funded PhD in French at Royal Holloway, University of London, with a focus on ‘acoustic spectatorship’ and the post-1979 film and video work of Jean-Luc Godard. This followed her MA by Research on the role of sound and music in the 1970s cinema of Marguerite Duras. Her interest in sound in cinema, sparked by her fascination with Duras’s prose, arose from her BA degree in French with Music, also from Royal Holloway.

Albertine was educated at a comprehensive school and she developed her love of cinema, music, and literature during her A-Levels at a further education college. Here she was introduced to films by Leos Carax, Mathieu Kassovitz, and Louis Malle, studied music by Dmitri Shostakovich, and read poetry and literature by Jacques Prévert, Joseph Joffo, Toni Morrison, and Carol Ann Duffy. After completing her undergraduate degree, Albertine spent time living and working in Montpellier and Paris, where she first came across Chantal Akerman’s 1970s films and this experience inspired her to embark on a PhD. She has also worked as an administrator at a Pupil Referral Unit for young people, and as a TESOL assistant, providing English language support to refugees and asylum seekers. Albertine has also completed CPD certified training run by the National Autistic Society and CPD accredited Disability Equality Training.

Albertine Fox is Senior Lecturer in French Film at the University of Bristol and her main areas of research are cinema and documentary studies, film history, theories of sound and listening, gender and sexuality, and queer theory.

Albertine is currently developing a book project on listening spaces and the face-to-face encounter in documentaries from the Francophone world. Albertine has recently published two related projects: a special conversation with the documentary filmmaker, Katy Léna Ndiaye, accompanied by the essay 'Collaborative Listening, Collaborative Pedagogy' in Screen Worlds: Decolonising Film and Screen Studies, and an interview and collaboration with the Lebanese filmmaker Corine Shawi in Journal of Middle East Women’s Studies.

Albertine's first monograph, Godard and Sound: Acoustic Innovation in the Late Films of Jean-Luc Godard (Bloomsbury, 2017/2020), re-evaluates the multimedia work of the Swiss-French filmmaker Jean-Luc Godard from an auditory perspective, expanding current typologies of film sound and prompting new debates about the relationship between sound, the moving image, and the film spectator.

At postgraduate level, Albertine teaches sessions on the MA Comparative Literatures and Cultures ('Cultural Encounters' and 'Theories of Visual Cuture'), covering set work by Chantal Akerman, Gloria Anzaldúa, and Jocelyne Saab. She has also contributed to the MA Applied Translation and she co-supervises MPhil and PhD students. Albertine acts as Postgraduate Teaching Officer for the School and during the academic year 2021-22 she will also serve as interim Programme Director for the MA Black Humanities to cover for staff on leave.

Albertine is open to supervising PhD candidates on a range of topics in the broad areas of French and Francophone cinema and documentary film studies, encompassing any of the areas outlined under 'Keywords'.
BETA
This is a new service – your feedback will help us to improve it.