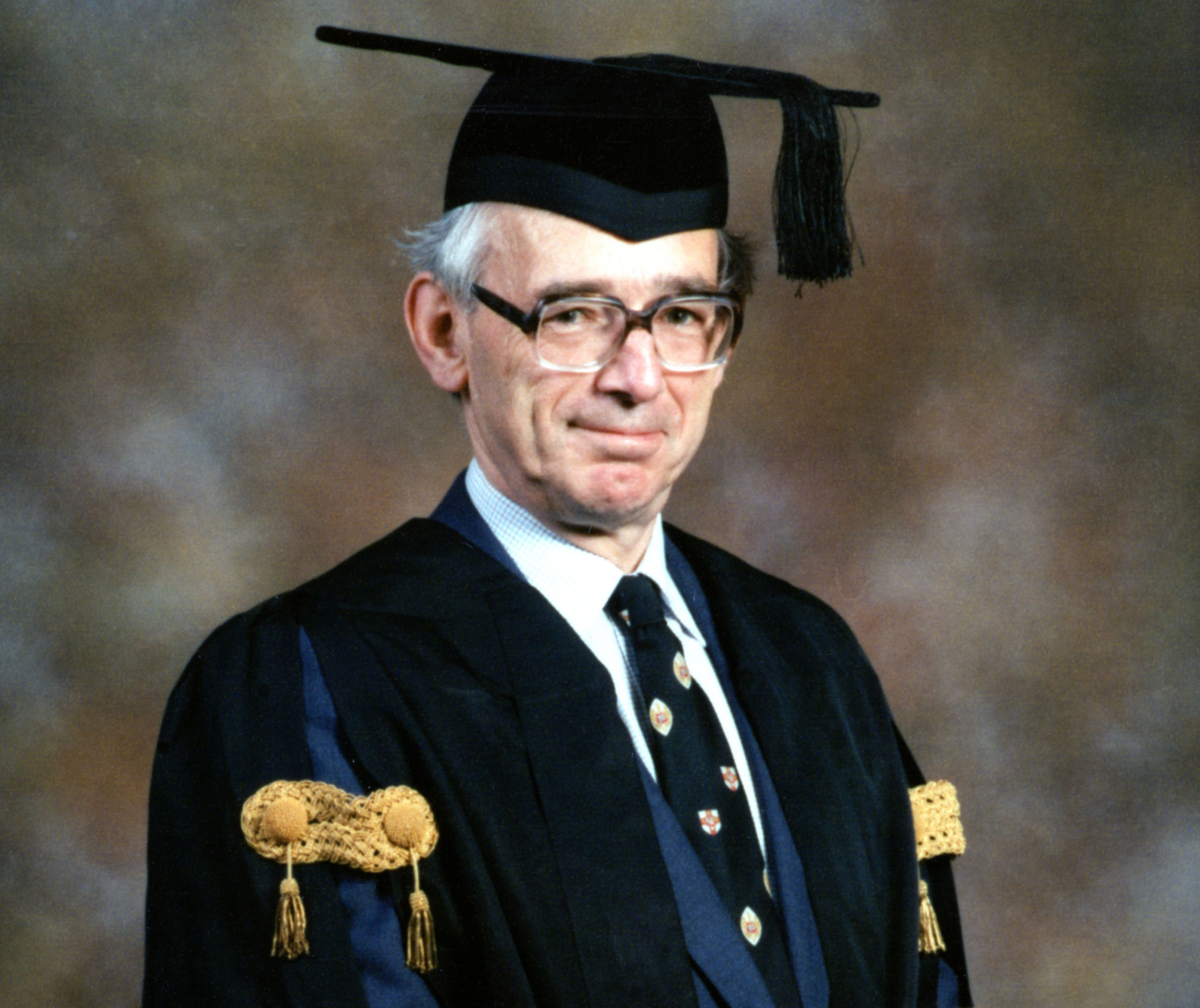 Professor David L Dineley, former Head of the Department of Geology at Bristol and a noted expert on fossil fishes, stratigraphic methods, and the Devonian Period, passed away recently. His colleagues Dr Liz Loeffler and Professor Michael Benton offer a remembrance.

Professor David Lawrence Dineley was Chaning Wills Professor and Head of the Department of Geology at the University of Bristol from 1968 to 1989. He is best known for his fundamental work on early fossil fishes and on Devonian stratigraphy, on which he wrote many scientific papers and books.

David was a cheerful character, with a great sense of humour and talent for drawing cartoons. He enjoyed travelling, particularly to remote places, leading or participating in geological expeditions under canvas to Spitsbergen and the Canadian Arctic Islands. He was a good team worker, a skill apparent not just on expeditions but also in the various administrative roles that he undertook in his academic life.

He studied for a BSc in Geology at the University of Birmingham (1948) and earned his PhD there in 1951, for a thesis on the fish-bearing Lower Old Red Sandstone in the Welsh Borderlands. He then took up a post at what was soon to become the University of Exeter (founded in 1955), with a short spell of employment by the University of Bristol in 1959-1960. It was at Exeter that he began exploring stratigraphic correlation across the different facies of the Devonian, in Devon and elsewhere.

In Canada, Dineley worked extensively on Devonian rocks and early vertebrates and led or participated in a number of expeditions to the Canadian Arctic Islands, as well as to Nova Scotia. He also conducted fieldwork in collaboration with various companies exploring for oil and gas in Canada. He was Head of the Department of Geology in the University of Ottawa from 1966 to 1968, before returning to the UK to take up the Chair in Geology at Bristol.

While Head of Department at Bristol, numbers of staff and students increased, as did his administrative activities. Early in his tenure, Dineley initiated and directed the “Sabrina Project”, an interdisciplinary study of the Severn Estuary involving the Science and Engineering faculties that raised the prospect of harnessing the Severn for tidal power, while increasing our understanding of its estuarine ecosystem. He was Dean of the Faculty of Science (1976-1979) and, later, Pro Vice-Chancellor (1984-1987), posts he held in parallel with continuing as Head of Department, as was the norm then.

Throughout this time, Dineley maintained his links with the University of Ottawa, participating in several return trips to the Arctic Islands to collect fossil fishes. He also travelled widely, examining and reporting on Devonian rocks across the globe in his work for the Devonian Subcommission of the International Committee on Stratigraphy.

After he retired in 1990, Professor Dineley continued his research on the Devonian and its fishes, as well as writing and editing a number of geological books. One of his largest retirement tasks was to contribute a staggering 134 articles to The Oxford Companion to the Earth in 2000 – he covered everything about stratigraphy, his great love, as well as historical individuals, and all the articles nobody else would take on, such as ‘Music and the Earth sciences’ and ‘Geological humour’.

Sadly, David's wife, Nancy, developed Parkinson's disease and, as her health and mobility deteriorated, he cared for her tenderly at their home in Westbury on Trym with its spectacular views over the golf course to the village beyond. After her death, in 2013, David moved to St Monica's retirement community at Cote Lane. There, in his cosy flat, filled with books and Arctic memorabilia, David always made visitors welcome. His travelling days were not over, however. In 2014, he accompanied his daughter Rachel and her husband on a cruise along the Norwegian coast and up to Spitsbergen where, as well as enjoying sightings of the wildlife and flora, he was treated to a view of the river that the Norsk Polarinstitutt had named after him in recognition of his geological work in the area.

In 2017, he became an unlikely star of a 2017 Channel 4 programme, Old People’s Home for 4 Year Olds. Before the children arrived, he expressed his doubts about how he and fellow residents would respond to the boisterous youngsters, but they soon had him reading stories and taking part in races on the lawn. He remained in touch with Eva, the little girl he befriended, and would greatly enjoy visits from her and her mother.

Following a deterioration in his health during 2021 and a requirement for 24-hour care, David moved to “Garden House” – St Monica's on-site care home – where he passed away peacefully in May 2022. He leaves two daughters: Rachel and Frances (partners Steve and Mike), and grandchildren (Frances' offspring) Edward and Grace.

He is remembered in the David Dineley Prize awarded each year to the best thesis by a student of the MSc in Palaeobiology; more details can be found in the history pages of the School of Earth Sciences.