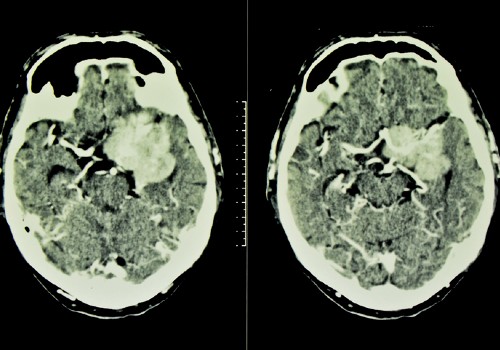 A generic image of a CT scan showing a meningioma, brain tumour

High doses of a widely-used drug used in the hormonal treatment of conditions such as excessive hair growth, early puberty, prostate cancer are linked to an increased risk of meningioma — the most common type of benign brain tumour, finds a University of Bristol-led study of over 8 million patients. The study is published in Scientific Reports today [4 February].

Typically slow-growing, meningiomas are benign tumours, which are often revealed incidentally by imaging but can cause significant disability due to compressing or squeezing the adjacent brain, nerves and vessels and pressure effects within a fixed cranial vault.

Recent studies have reported an association between the growth of meningiomas and hormonal treatments, particularly prolonged and high dose use of the drug, cyproterone acetate (CPA).

High doses of cyproterone acetate  (> 50 mg/day) is usually prescribed to male patients with inoperable prostate cancer, a condition which leads to excessive hair growth known as hirsutism, or male-to-female transsexual hormonal therapy. Lower doses (2-10 mg/day) of the drug are typically used in combination with oestradiol to treat androgen-associated alopecia or female seborrhoea.

Given the drug's widespread use, researchers at the Universities of Bristol, Cambridge and the National University of Singapore, conducted a systematic review and meta-analysis study using four studies comprising a sample of 8,132,348 patients, to assess the evidence of the association between cyproterone acetate and incidence of meningiomas.

The sample included 165,988 patients who were identified as taking cyproterone acetate at varying dose amounts. Using this data, the team analysed the occurrence of meningioma in patients using high versus low dose cyproterone acetate and found a significant association between high dose usage and increased risk of meningioma. However, this association was not found with low doses.

Keng Siang Lee, a medical student and the study's lead author from Bristol Medical School at the University of Bristol, said: "The cause of meningiomas is controversial but there is strong evidence to suggest a plausible role for sex hormones in the onset of meningioma. We know it has a predilection for females especially after puberty. Furthermore, fluctuations in meningioma growth during the menstrual cycle, pregnancy, and breastfeeding have also been well-documented. We are also aware of the well-characterised distribution of progesterone, oestrogen, and androgen receptors in certain meningiomas located at the base of the skull.

"In light of these results, prescription of high-dose cyproterone acetate, especially for off label indications, should be considered carefully. Additionally, we suggest that routine screening and meningioma surveillance by brain MRI offered to patients prescribed with cyproterone acetate is likely a reasonable clinical consideration if given at high doses for long periods of time.