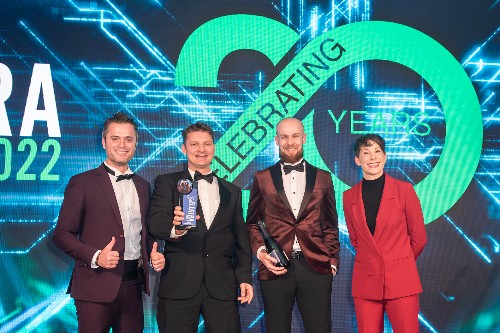 Robotic hand with a 3D-printed tactile fingertip on the little (pinky) finger. The white rigid back to the fingertip is covered with the black flexible 3D-printed skin.

Cut-through section on the 3D-printed tactile skin. The white plastic is a rigid mount for the flexible black rubber skin. Both parts are made together on an advanced 3D-printer. The ‘pins’ on the inside of the skin replicate dermal papillae that are formed inside human skin.

Professor Nathan Lepora and his team were celebrating last night after their landmark robotic finger-tip which makes human-like ‘nerve’ signals was recognised at the Elektra Awards 2002.

Professor Lepora collected the Readers’ Choice Award: University Research Project of the Year at the 20th anniversary of the awards held at a grand ceremony in London.

Professor Lepora and his team made the headlines earlier this year after creating the sense of touch in an artificial fingertip. They did this by using a 3D-printed mesh of pin-like papillae on the underside of the compliant skin, which mimic the dermal papillae found between the outer epidermal and inner dermal layers of human tactile skin. The papillae are made on advanced 3D-printers that can mix together soft and hard materials to create complicated structures like those found in biology.

This highly sensitive, 3D-printed fingertip could help robots become more dexterous and improve the performance of prosthetic hands by giving them an in-built sense of touch.

“We discovered our 3D-printed tactile fingertip can produce artificial nerve signals that look like recordings from real, tactile neurons,” said Professor Lepora of Bristol Engineering Maths department. “It was amazing to receive an Elektra Award for our work on this project!

“I was particularly impressed by the world leading technology show-cased at the awards from the UK electronics industry and so excited to be involved.”