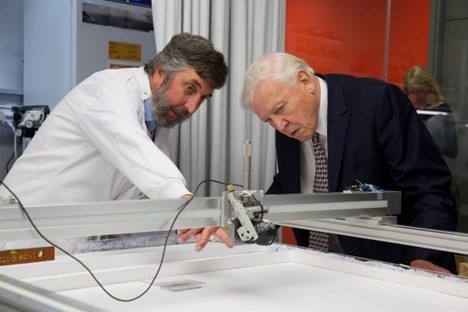 Prof Nigel Franks showing Sir David Attenborough the gantry during the opening of the new Life Sciences Building in 2014. University of Bristol

Scientists have developed a small robot to understand how ants teach one another.

The team built the robot to mimic the behaviour of rock ants that use one-to-one tuition, in which an ant that has discovered a much better new nest can teach the route there to another individual.

The findings, published in the Journal of Experimental Biology today, confirm that most of the important elements of teaching in these ants are now understood because the teaching ant can be replaced by a machine.

Key to this process of teaching is tandem running where one ant literally leads another ant quite slowly along a route to the new nest. The pupil ant learns the route sufficiently well that it can find its own way back home and then lead a tandem-run with another ant to the new nest, and so on.

Prof Nigel Franks of Bristol’s School of Biological Sciences said: “Teaching is so important in our own lives that we spend a great deal of time either instructing others or being taught ourselves. This should cause us to wonder whether teaching actually occurs among non-human animals. And, in fact, the first case in which teaching was demonstrated rigorously in any other animal was in an ant.” The team wanted to determine what was necessary and sufficient in such teaching. If they could build a robot that successfully replaced the teacher, this should show that they largely understood all the essential elements in this process.

The researchers built a large arena so there was an appreciable distance between the ants’ old nest, which was deliberately made to be of low quality, and a new much better one that ants could be led to by a robot. A gantry was placed atop the arena to move back and forth with a small sliding robot attached to it, so that the scientists could direct the robot to move along either straight or wavy routes. Attractive scent glands, from a worker ant, were attached to the robot to give it the pheromones of an ant teacher.

Prof Franks explained: “We waited for an ant to leave the old nest and put the robot pin, adorned with attractive pheromones, directly ahead of it. The pinhead was programmed to move towards the new nest either on a straight path or on a beautifully sinuous one. We had to allow for the robot to be interrupted in its journey, by us, so that we could wait for the following ant to catch up after it had looked around to learn landmarks.”

“When the follower ant had been led by the robot to the new nest, we allowed it to examine the new nest and then, in its own time, begin its homeward journey. We then used the gantry automatically to track the path of the returning ant.”

The team found that the robot had indeed taught the route successfully to the apprentice ant. The ants knew their way back to the old nest whether they had taken a winding path or a straight one.

Prof Franks explained: “A straight path might be quicker but a winding path would provide more time in which the following ant could better learn landmarks so that it could find its way home as efficiently as if it had been on a straight path.

“Crucially, we could compare the performance of the ants that the robot had taught with ones that we carried to the site of the new nest and that had not had an opportunity to learn the route. The taught ants found their way home much more quickly and successfully.”

The experiments were conducted by undergraduates Jacob Podesta, who is now a PhD student at York, and Edward Jarvis, who was also a Masters student at Professor Nigel Franks’s Lab. The gantry programming was accomplished by Dr. Alan Worley and all the statistical analyses were driven by Dr. Ana Sendova-Franks.

Their approach should make it possible to interrogate further exactly what is involved in successful teaching.

‘Robotic communication with ants’ by Nigel R. Franks, Jacob A. Podesta,  Edward C. Jarvis, Alan Worley and Ana B. Sendova-Franks in the Journal of Experimental Biology.