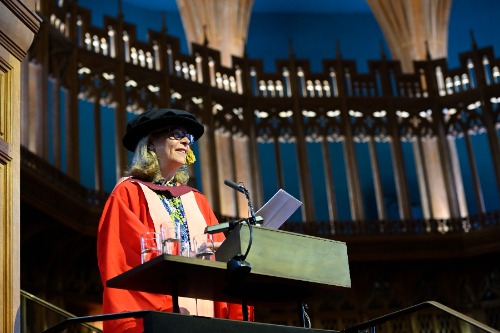 A doctor who transformed the lives of thousands of Afghans has received an honorary degree from the University of Bristol, in the same ceremony in which her daughter graduated.

It is 33 years since Dr Sarah Fane OBE last donned academic dress for a University of Bristol graduation ceremony.

Many of those 33 years were spent in and around Afghanistan, where she has delivered babies in mountain villages, disguised herself as a man to get to patients during the war against the Soviet Union and ran a charity supporting health, education and cricket.

Her charity Afghan Connection, founded in 2002, built 47 schools, refurbished 130 more, created 110 cricket pitches and is credited with inspiring a renaissance in Afghan cricket which lasts to this day.

On Tuesday April 12 she was awarded an honorary doctorate beside her daughter, Antonia Fane, who graduated with a degree in Liberal Arts and French.

Dr Fane herself had planned to study Latin and French at the University, with an eye to spending a year abroad in Paris followed by a job at the Diplomatic Service.

But her life changed forever during a gap year in rural south India, where locals, whose only other encounter with a white person was a visiting nurse, kept asking her for medical attention.

The experience left an indelible mark and set her on a course to study Medicine.

A few months into her languages degree she went back to college for science O-Levels, working full-time while studying and sharing a bed with a friend to afford the rent.

She enrolled in Medicine at Bristol in 1983 and in 1987, aged 24, spent her elective placement in the North West Frontier Province of Pakistan. It was just across the border from Afghanistan, where religious warriors – or mujahedeen – were fighting the Soviet invasion. A far cry from Paris.

“It was a very tribal area and you could hear the war across the border,” Dr Fane recalls.

“The area had one of the highest maternal mortality rates in the world and I saw some truly shocking things. At night, I was escorted by a man with a gun to the labour ward to deliver babies.”

She visited again in 1989 to help a surgical team treating refugees, where she had to disguise herself as a man to travel safely. “It was just simpler that way,” she says, casually.

Twelve years and four children followed, during which she worked in various parts of the NHS, before visiting Afghanistan to advise on a clinic in the village of an old friend.

“What I saw astonished me,” she recalled. “They’d had war for 23 years and there was sheer devastation everywhere.

“As a mother myself, it was deeply upsetting to see families torn apart by war and mothers who could not feed their children.”

The Taliban were in charge of a country with almost no roads, schools or hospitals.

Dr Fane set up Afghan Connection in 2002. The charity began by modernising hospital wards and sending out doctors to support, before moving on to train teachers and build schools.

They began training cricket coaches and supplying cricket equipment in 2008, at the suggestion of Dr Fane’s then-14-year-old son, Alex, who remains cricket-mad.

The investment “caught a wave” of interest in sport and helped propel the national team to tenth in the world.

“There was this huge groundswell of support for cricket,” Dr Fane remembers. “Loads of kids wanted to play and we were there to coach them.”

They built more than 110 cricket pitches in schools, each time renovating nearby classrooms and facilities, and trained 180 coaches. They also helped deaf and blind children play, many for the first time.

A great mission for a cricket fanatic? “I actually wasn’t into cricket at all. But I loved it for what it did for kids and have grown to enjoy it very much,” she said.

Marylebone Cricket Club (MCC), the owner of Lord’s and elder statesman of cricket clubs, supported Dr Fane’s cricket projects, and in 2012 made her an Honorary Life Member for her work with cricket in Afghanistan.

It is here that she now works, running their charitable arm, the MCC Foundation, which has a mission to transform lives through cricket, having wound down Afghan Connection in 2020.

“We started getting threats that we’d have to start paying taxes to the Taliban,” Dr Fane explained. “After 18 years of transparency I couldn’t look my donors in the eyes and tell them we were doing that. Nor did I want any support to reach the Taliban.

“We’d done so much. 90% of girls were going to school in the areas where we worked and there was so much momentum. It was time to leave.”

During its 18-year span, Afghan Connection supported more than 500,000 children.

At the graduation ceremony, Antonia Fane cheered proudly as her mother received her honorary degree, just moments after she had been awarded hers.

Antonia wrote her dissertation about the education available at a refugee camp, Shatila in Lebanon, where her mother is running a project for MCC.

She even managed the year abroad in Paris that her mother never did, and now teaches in Kent.

Antonia said: “I am so proud of everything my mum has achieved, she is always putting everyone else before herself.

“She has raised four children and been a mother to lots of others who needed her too. I always really enjoyed walking past the Bristol children’s hospital, as that is where it all started.”

Professor Sarah Purdy, the University of Bristol’s Pro Vice-Chancellor for Student Experience, said: “Dr Sarah Fane has worked in communities beset with war and poverty, thousands of miles from the comforts of home. She risked her life countless times over to advance the lives of young people, especially girls.

“Dr Fane’s story is one of determination, defiance of odds and a deep, deep desire to help. We’re immeasurably proud that she’s an alumna of the University of Bristol and honoured to welcome her back to celebrate her achievements.”