Statue of Henrietta Lacks unveiled at University of Bristol 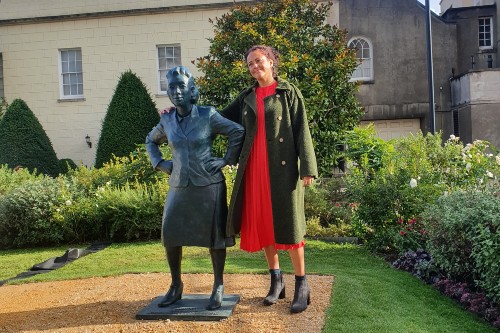 Artist Helen Wilson-Roe with the statue University of Bristol 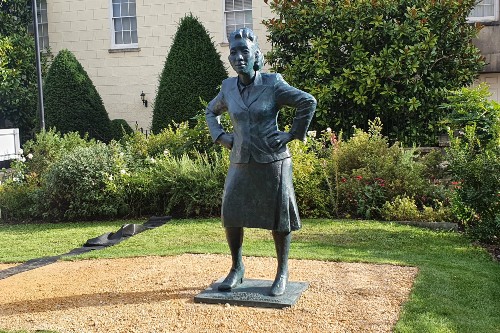 The statue of Henrietta Lacks University of Bristol

A life-size bronze statue of Henrietta Lacks, a Black American woman whose cells were the first ever to survive and multiply outside the body, and whose use changed the course of modern medicine, has been unveiled at the University of Bristol by members of her family to honour the 70th anniversary of her cells first being used.

Her son Lawrence Lacks, who was 17 when his mother passed away, was joined by her grandson Alan Wilks and his wife Pam, granddaughter Jeri Lacks-Whye and great-granddaughters Victoria Baptiste and Veronica Robinson for the unveiling this afternoon – Monday 4 October 2021.

The statue, commissioned by the University earlier this year, is located in the heart of the campus precinct next to Royal Fort House. It is the work of Bristol artist Helen Wilson-Roe and is the first public statue of a Black woman made by a Black woman to be permanently installed in the UK.

It follows the exhibiting of two of Helen’s portraits of Henrietta Lacks and Cllr Cleo Lake, Bristol’s first Black female Lord Mayor, which have been on display in the Wills Memorial Building since October 2020.

Henrietta Lacks was a young wife and mother who died in 1951 of an unusually aggressive form of cervical cancer. During surgery, a sample of cells was taken from the tumour and was sent to a laboratory where they were found to be the first living human cells ever to survive and multiply outside the human body.  Henrietta’s cells were taken without her or her family's knowledge or consent, and it was only in 1975 that by chance the family found out about her legacy.

Because Henrietta’s cells were able to proliferate indefinitely, they formed the first scientifically defined ‘immortal’ human cell line, opening the door to all kinds of experiments and research on cell behaviour.

These cells made possible some of the most important medical advances of all time including the development of the polio vaccine, chemotherapy, gene-mapping, IVF and cloning.

They became known as HeLa cells - taking the first two letters of Henrietta’s first and last names. HeLa cells are used in almost every major hospital and science-based University in the world, including the University of Bristol where they have been used most recently, for COVID-19 research.

The University’s Faculty of Life Sciences has been working with students and staff to look at how it can diversify its teaching curriculum with one focus being to highlight previously overlooked figures which will include Henrietta Lacks and the important ethical issues and debates that are part of her story.

The University is also announcing the launch of The Henrietta Lacks Studentship - a six-week paid summer internship for an undergraduate student to work in its laboratories on cell biology – and, with the support of the Lacks Family, is planning free in-person visits to the University for KS4 and KS5 pupils to learn more about cell biology. Other education science events in collaboration with the Lacks family both in the UK and overseas are underway.

The University is collaborating with the Lacks’ family-led HELA 100: The Henrietta Lacks Initiative, which began during her centennial year and features a worldwide education and advocacy tour. The statue unveiling will also be live streamed around the world as part of the HELA100 Colloquium, commemorating 70 years since Henrietta’s incredible HeLa cells changed the world and her untimely death on 4 October 1951.

Attendees will learn about the worldwide advancements made by the cells and Henrietta’s descendants to educate future generations on the impact of her immortal HeLa cells while promoting health equity and social justice.

Jeri Lacks-Whye, Henrietta Lacks’ Granddaughter, said: “As the world commemorates 70 years since Henrietta Lacks’ HeLa cells changed the world, we also reflect on my grandmother's untimely passing. It is only fitting that she be memorialised to educate future generations on her legacy and the importance of advancing health equity and social justice for all. The Lacks Family is honoured to begin our HELA100 worldwide tour with the University of Bristol and Helen Wilson Roe for the unveiling of this historic statue.”

Helen Wilson-Roe said: “Henrietta’s statue will be the first public statue of a Black woman made by a Black woman in the UK and will be installed permanently on the University of Bristol campus. May our ancestors continue to show us the way to walk.

“As a child growing up in Bristol there were no statues of Black women that I could identify with. So, knowing that my children and their grandchildren and great grandchildren will be able to see Henrietta's statue, is just fantastic, especially at this time when Bristol is starting to address its past.

“I have been researching about Henrietta Lacks independently for over 20 years. My mission now is to finish painting all 24 portraits of the Lacks family and gift the portraits to the family so that they retain full control of their legacy.”

Professor Jeremy Tavare, Dean of the Faculty of Life Sciences at the University of Bristol, who is also a biochemist, added: “Many of our biomedical science researchers whose work uses human cells have used Henrietta’s cells in their research or with collaborators, including myself. We all owe Henrietta an enormous debt of gratitude.

“I am absolutely delighted to be able to host this beautiful statue of Henrietta on our campus so we can visually honour her contribution to important discoveries we have made in Bristol over the last 70 years. I feel intensely proud that her family have been so supportive in our doing so. Her statue will do so much to raise her profile with our students and also with children in our local communities.”

Professor Judith Squires, Deputy Vice-Chancellor and Provost, said: “Henrietta Lacks’ legacy to science research and health care globally cannot be underestimated. This statue celebrates the impact her cells have made to our research here in Bristol, and indeed research around the world.

“The Lacks family have a unique relationship with Helen Wilson-Roe, who is a local artist and wished for her statue to be in Bristol. We are pleased to be able to give it a permanent home right here on our campus.

“The statue also marks a significant step in addressing the lack of representation of women, and women of colour, in public artwork in our diverse multicultural city. As public art, the local community are most welcome to visit to see this wonderful statue for themselves and learn more about Henrietta Lacks and her legacy.”

About HELA100: The Henrietta Lacks Initiative