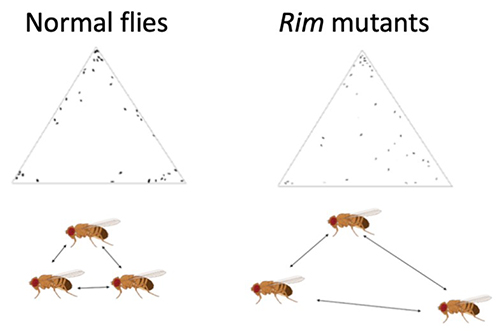 Images of a groups of fruit flies (small black dots) placed in a triangular arena. Normal flies (left triangle) like to be a certain distance apart showing their preference for social space, flies mutants in the schizophrenia-associated Rim gene (right) prefer increased in social distance. 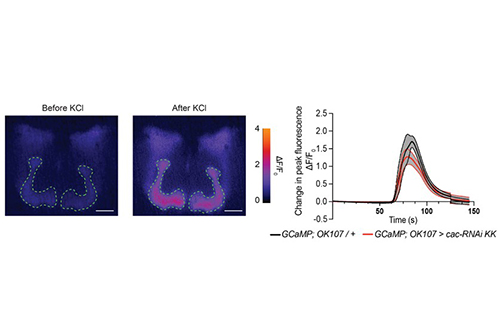 Mutations in the schizophrenia associated cacophony calcium channel gene causes a reduction in calcium signalling in the memory centres of the fly brain called the mushroom body (the two L shaped structures in the images) resulting in memory loss in the flies.

Schizophrenia is a severe long-term mental health condition that is historically poorly understood and treated. It is relatively common, affecting one to two per cent of the population, and is known to be up to 80 per cent genetic in origin.

Recent advances in sequencing genomes of people with schizophrenia have identified a list of novel genes and mutations associated with the disease. Many are expressed in the brain and are involved in how neurons communicate with each other by electrical and chemical signals released at synapses.

The research was performed by the first student, Dr Sergio Hidalgo, on the dual PhD program from the Universities of Bristol and the Pontificia Universidad Catolica de Chile. He studied the role of two schizophrenia associated genes on behaviours associated with the disease, using the genetics of the fruit fly, Drosophila.

“We studied two of these schizophrenia-associated genes – one called Rim, which is involved in neurotransmitter release at synapses, and another called CACNA1A and CACNA1B in humans and cacophony in flies, voltage-sensitive calcium channels involved in electrical and chemical signalling in and between neurons. We found that fly Rim mutants showed several behavioural changes seen in people with schizophrenia who may have Rim mutations. These included preferring larger social distances between individuals when in a group and changes in smell or olfaction. We also found the circadian (24-hour body clock) deficits reported in schizophrenia were also present in Rim mutant flies,” said Dr James Hodge, who supervised the research at School of Physiology, Pharmacology and Neuroscience at the University of Bristol.

Strikingly, treatment with the commonly used antipsychotic, haloperidol, rescued some of the Rim mutant’s behavioural problems.

The second study looked at voltage-gated calcium channels, several of which are major contributors to the risk of developing schizophrenia. The team focussed on the negative symptoms of schizophrenia which include behavioural defects such as impaired memory, sleep and circadian rhythms.

“These symptoms are particularly poorly understood and treated. We found fly cacophony (cac) mutants showed several behavioural features including decreased night-time sleep and hyperactivity similar to those reported in human patients. We also found that loss of cac function in the clock of the fly’s brain decreased their circadian rhythms, while loss of cac function in their memory centre reduced the fly’s memory via a reduction in calcium signalling,” said Dr Sergio Hidalgo.

Two new research papers have come out of the study, published in Translational Psychiatry and Neurobiology of Disease. The research represents important advances in understanding schizophrenia by demonstrating how loss of rim or cac Cav2 channel function causes a number of disease relevant cognitive and behavioural deficits and underlying reduction in synaptic growth and neuronal calcium transients.

“It is apparent from this study that these behaviours are caused by changes in calcium signalling, shape of synapses and their release of neurotransmitter. Along with the ability to return these behaviours to normal with a commonly used schizophrenia drug, these studies establish Drosophila as a high-throughput in vivo genetic model to study the Cav channel and neurotransmitter release pathophysiology related to schizophrenia.

“The next step is to understand how rim and different calcium channels act together at synapses to regulate behaviours affected by schizophrenia. By testing drugs or treatments directed at these targets we will develop a deeper understanding of therapies for schizophrenia, and how they work.”

“It is important we secure funding for this novel research which has potential to inform truly significant advances in the way we treat this common and debilitating condition,” added Dr James Hodge.

“Understanding the complexity of schizophrenia etiology could help us to develop new and more effective treatments. By showing that some molecular mechanisms are conserved between species, we can propose the use of flies as a new platform for drug testing,” added Dr Sergio Hidalgo.

Dr Jorge Campusano, joint supervisor of the research from the Department of Cellular and Molecular Biology at Pontificia Universidad Catolica de Chile, said “Sergio Hidalgo is the first student in a new dual doctoral programme signed by University of Bristol and Pontificia Universidad Catolica de Chile. His research demonstrates how collaboration between our two universities can expand the frontiers of knowledge and the reach of our findings. This is particularly poignant on such an important area of biomedicine these days, which is mental health.”