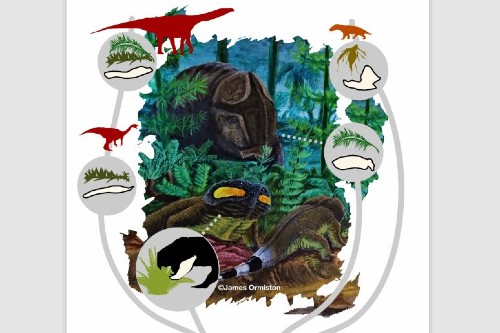 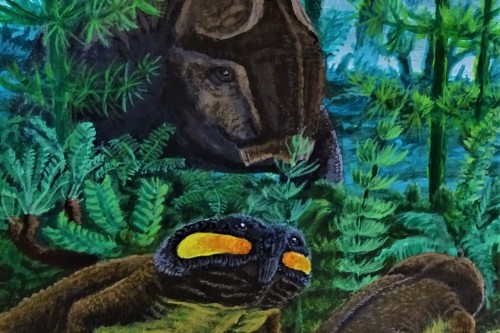 The evolution of herbivores is linked to the plants that survived and adapted after the ‘great dying’, when over 90% of the world’s species were wiped out 252 million years ago.

Researchers at the University of Bristol found that plant eaters diversified quickly after mass extinctions to eat different kinds of plants, and the ones that were able to chew harsher materials, which reflected the drying conditions of the late Triassic, became the most successful. These tougher herbivores included some of the first dinosaurs.

Following the largest mass extinction of all time, the end-Permian mass extinction, ecosystems rebuilt from scratch during Triassic times, from 252–201 million years ago paving the way for new species, and many new kinds of plants and animals emerged. In a new study published in Nature Communications and led by Dr Suresh Singh of Bristol’s School of Earth Sciences, fresh evidence has emerged of the complexity of the post-extinction recovery.

“I wanted to focus on the plant-eaters, including some of the first dinosaurs,” says Dr Suresh Singh. “The main animals in any ecosystem tend to be the herbivores, and we found that they show remarkable evidence of specialisation in the turbulent times after the great mass extinction. In fact, the environmental shocks that killed so many species, such as global warming and acid rain, were still returning from time to time, but the survivors were set on exploring new diets.”

“We were surprised to be able to identify definite specialisations among the herbivores,” said Dr Tom Stubbs, a collaborator. “We call these groups, the ingestion generalists, prehension specialists, durophagous specialists, shearing pulpers, and heavy oral processors; these names reflect the power of their jaws, their teeth, and the kinds of plants they would likely have been eating.”

“It might seem to be a speculative enterprise to identify the diets of animals that died over 200 million years ago,” said Professor Emily Rayfield, who also co-led the project. “But we measured hundreds of fossil jaws and compared their shapes with living animals, and we estimated key functional values from the fossil jaws such as mechanical advantage and bite force, measuring the leverage of the jaws and how fast or forcefully they could shut.”

Results were studied through the 80 million years following the mass extinction and including the diversification of the first plant-eating dinosaurs. “We were able to map the evolution of all the functional characters relating to feeding across the evolutionary tree and through time,” said Dr Armin Elsler, collaborator. “We found to our surprise that, during this time, several new groups diversified as herbivores, and they seemed to take over their roles  by pushing potential competitors aside, not necessarily by wiping them out.”

The plants were also diversifying through the Triassic, and some of the evolution of herbivores relates to the availability of new kinds of plant food. “One key thing was the expansion of groups that were able to handle tough plant material, with powerful jaws for chopping and chomping,” says Dr Singh. “This reflects the drying conditions especially in the Late Triassic, when many softer plant groups became less common, and dry-adapted conifers for example, spread worldwide. These changes combined with strictly enforced niche separation drove patterns of extinction as the generalist, hardy herbivores thrived, as other herbivores died out.”

“This kind of macroecological analysis represents a huge amount of work,” said Professor Mike Benton, who co-led the study. “But it sheds real light on key processes at an ecological level and helps explain why some groups died out and were replaced by others such as the first dinosaurs. We can be reasonably certain of the results because we have excellent data on the geological ages of the specimens, their relationships to each other, and the key features of their jaws and teeth that correspond to their ancient diets. What was once quite a speculative kind of project has now become much more analytical and testable.”