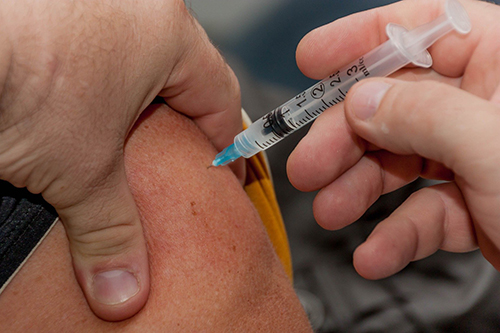 Half (52 per cent) of those who said they would definitely not get a COVID-19 vaccine when asked back in November/December 2020 have now done so, indicating that many people’s hesitancy has disappeared since the UK's vaccine rollout began, according to a new study.

Among people who said they were not very or not at all likely to accept a vaccine when asked last year, an even greater share – 84 per cent – have since been vaccinated.

The research, by King's College London and the University of Bristol, is based on a survey of 4,896 UK adults aged 18 to 75 conducted between 1 and 16 April. It follows up a study in Nov/Dec 2020 and tracks 1,879 of the same individuals to see how their views have changed and why.

The analysis reveals that, overall, 94 per cent of people who have been invited for a vaccine have taken up the offer – but despite this, there’s a need to avoid complacency, as vaccine intentions and beliefs still vary among different groups, potentially undermining the very high levels of coverage needed to stay on track for a further easing of lockdown, and leaving some communities more exposed.

How people changed their minds on getting vaccinated

Among those who have not yet been offered a Covid vaccine, there has also been be a significant change in intention to get vaccinated: many people who were previously sceptical about doing so now indicate that they are very likely to or definitely will.

Of those who said in Nov/Dec 2020 that they were not very or not at all likely to get a vaccine once it became available, 52 per cent say they’re now certain or very likely to do so – although only 15 per cent of those who were previously definite that they wouldn’t get the vaccine have changed their minds in this way.

Across different ethnic and religious groups surveyed, there have been big increases in Covid vaccine confidence since last year – although some groups are more confident than others:

The Muslim community stand out for certain beliefs about Covid vaccines:

Misinformation is also still a problem: 43 per cent of the public now say they’ve seen or heard messages encouraging people not to get a Covid vaccine since the start of the pandemic – up from 35 per cent in Nov/Dec 2020. This increase is reflected across nearly all the ethnic and religious groups surveyed.

Some groups are less trusting than others of the NHS, and some place greater trust in religious leaders when it comes to Covid and the response.

Of all the religious groups surveyed, Anglicans have the most faith in the NHS – 61 per cent trust it a great deal, compared with 39 per cent of Muslims who trust it to such an extent.

Based on their past experience of NHS care, ethnic minorities (66 per cent) are less likely than white people (78 per cent) to trust those looking after them.

Similarly, across the different religions, Muslims are least likely to trust those caring for them in the health service. Seventy-one per cent agree that they trust them, but only 20 per cent strongly agree that this is the case. This compares with 41 per cent of Anglicans who strongly feel this way.

Muslims also place the greatest trust in their faith leaders, with 56 per cent trusting them a great deal or fair amount on issues relating to Covid and how we should be responding to it. They are followed by Catholics, 42 per cent of whom trust their religious leaders to this extent, while only 30 per cent of Anglicans do the same.

Dr Siobhan McAndrew, Senior Lecturer in Quantitative Social Science at the University of Bristol, said: "The high rates accepting the invitation to take up a vaccine are extremely encouraging. Convergence over time in vaccine confidence among members of different ethnic and religious groups provides evidence of a strong pro-vaccine norm.

"There is an apparently large difference in intention to get vaccinated between religious groups, with Muslims in particular standing out – but when we control for characteristics associated with religion, such as ethnicity, immigration status, social class and age, these differences are much reduced, suggesting that it’s not religious belief in itself that’s the driver. Nevertheless, the connections that the religiously-active have with religious peers, faith community leaders and with the NHS’s diverse workforce serve as a valuable communications resource. Tailored messaging via these channels will address specific community needs, reassure the cautious, and support vaccine confidence."

Technical details
Ipsos MORI interviewed a sample of 4,896 adults aged 16-75 in the United Kingdom between 1 and 16 April 2021 and 4,860 between 21 November and 22 December 2020. Data has been weighted to the known offline population proportions for age within gender, government office region, working status, social grade and education. All polls are subject to a wide range of potential sources of error. In the latest survey wave, the sample sizes for different religious groups vary, with the size for Muslims (157) comparatively smaller, reflecting relative population numbers – although this is still sufficiently large for robust comparisons between groups.

The findings in this study are part of “Covid and after: trust and perceptions”, a project funded under the ESRC COVID-19 Rapid Response research call ES/V015494/1.