Superconductivity in cuprates: ‘from maximal to minimal dissipation’ - a new model? 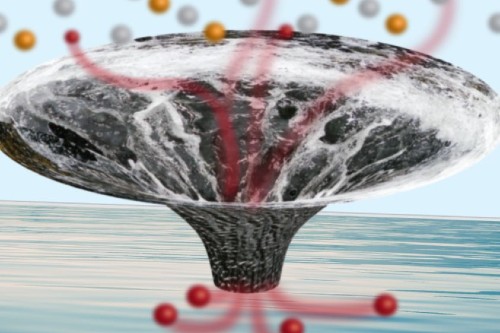 Researchers from the University of Bristol’s School of Physics used some of Europe’s strongest continuous magnetic fields to uncover evidence of exotic charge carriers in the metallic state of copper-oxide high-temperature superconductors.

Their results have been published this week in Nature. In a related publication in SciPost Physics last week, the team postulated that it is these exotic charge carriers that form the superconducting pairs, in marked contrast with expectations from conventional theory.

Superconductivity is a fascinating phenomenon in which, below a so-called critical temperature, a material loses all its resistance to electrical currents. In certain materials, at low temperatures, all electrons are entangled in a single, macroscopic quantum state, meaning that they no longer behave as individual particles but as a collective – resulting in superconductivity. The general theory for this collective electron behaviour has been known for a long time, but one family of materials, the cuprates, refuses to conform to the paradigm. They also possess the highest ambient-pressure superconducting transition temperatures known to exist. It was long thought that for these materials the mechanism that ‘glues together’ the electrons must be special, but recently the attention has shifted and now physicists investigate the non-superconducting states of cuprates, hoping to find clues to the origin of high-temperature superconductivity and its distinction from normal superconductors.

Most superconductors, when heated to exceed their critical temperature, change into ‘ordinary’ metals. The quantum entanglement that causes the collective behaviour of the electrons fades away, and the electrons start to behave like an ordinary ‘gas’ of charged particles.

Cuprates are special, however. Firstly, as mentioned above, because their critical temperature is considerably higher than that of other superconductors. Secondly, they have very special measurable properties even in their ‘metallic phase’. In 2009, physicist Prof Nigel Hussey and collaborators observed experimentally that the electrons in these materials form a new type of structure, different from that in ordinary metals, thereby establishing a new paradigm that scientists now call the ‘strange metal’. Specifically, the resistivity at low temperatures was found to be proportional to temperature, not at a singular point in the temperature versus doping phase diagram (as expected for a metal close to a magnetic quantum critical point) but over an extended range of doping. This extended criticality became a defining feature of the ‘strange metal’ phase from which superconductivity emerges in the cuprates.

Magnetoresistance in a strange metal

In the first of these new reports, EPSRC Doctoral Prize Fellow Jakes Ayres and PhD student Maarten Berben (based at HFML-FELIX in Nijmegen, the Netherlands) studied the magnetoresistance – the change in resistivity in a magnetic field – and discovered something unexpected. In contrast to the response of usual metals, the magnetoresistance was found to follow a peculiar response in which magnetic field and temperature appear in quadrature. Such behaviour had only been observed previously at a singular quantum critical point, but here, as with the zero-field resistivity, the quadrature form of the magnetoresistance was observed over an extended range of doping. Moreover, the strength of the magnetoresistance was found to be two orders of magnitude larger than expected from conventional orbital motion and insensitive to the level of disorder in the material as well as to the direction of the magnetic field relative to the electrical current. These features in the data, coupled with the quadrature scaling, implied that the origin of this unusual magnetoresistance was not the coherent orbital motion of conventional metallic carriers, but rather a non-orbital, incoherent motion from a different type of carrier whose energy was being dissipated at the maximal rate allowed by quantum mechanics.

From maximal to minimal dissipation

Prof Hussey said: “Taking into account earlier Hall effect measurements, we had compelling evidence for two distinct carrier types in cuprates - one conventional, the other ‘strange’. The key question then was which type was responsible for high-temperature superconductivity? Our team led by Matija Čulo and Caitlin Duffy then compared the evolution of the density of conventional carriers in the normal state and the pair density in the superconducting state and came to a fascinating conclusion; that the superconducting state in cuprates is in fact composed of those exotic carriers that undergo such maximal dissipation in the metallic state. This is a far cry from the original theory of superconductivity and suggests that an entirely new paradigm is needed, one in which the strange metal takes centre stage.”

'Incoherent transport across the strange-metal regime of overdoped cuprates' in Nature by Nigel Hussey et al.