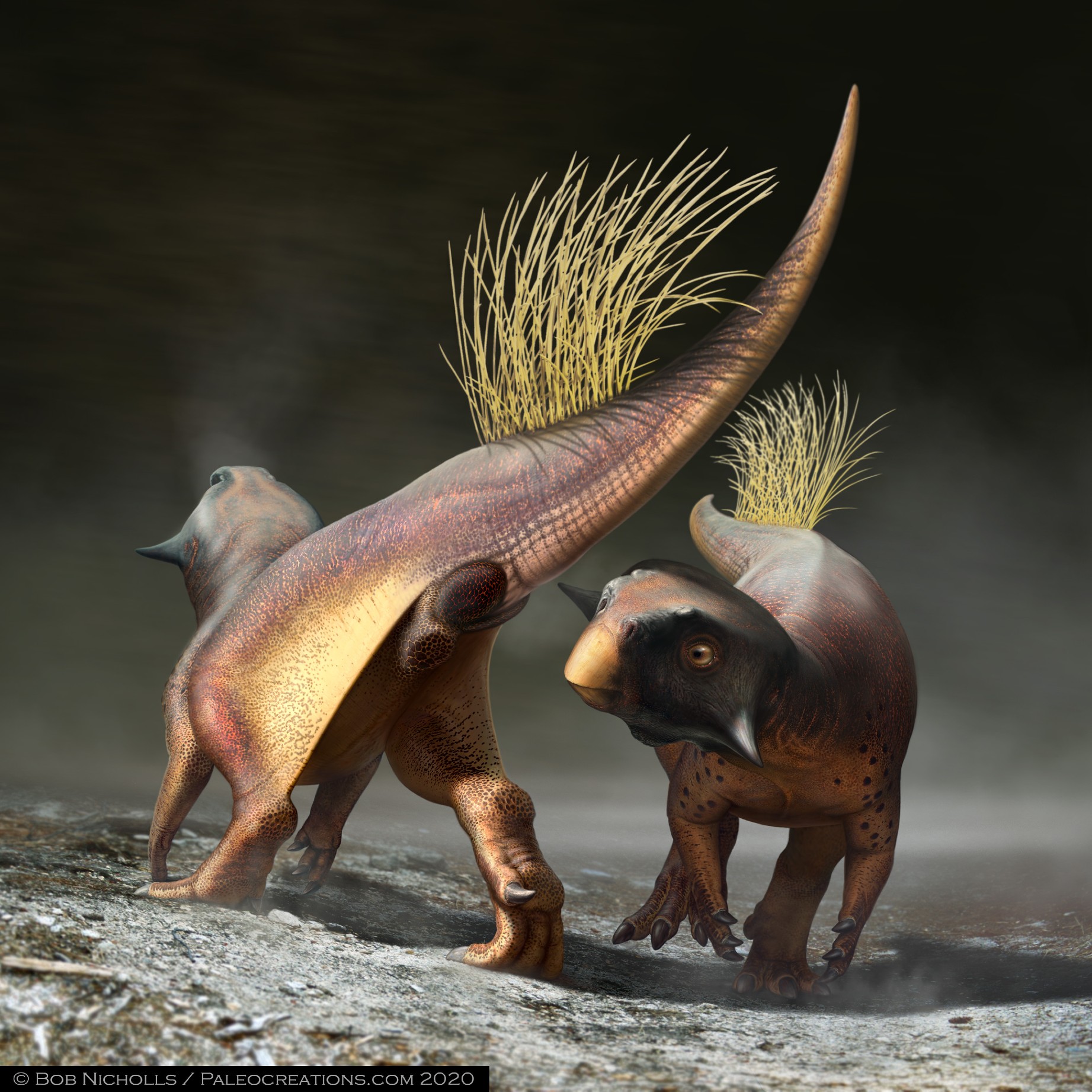 A reconstruction of Psittacosaurus illustrating how the cloacal vent may have been used for signalling during courtship Bob Nicholls/Paleocreations.com 2020 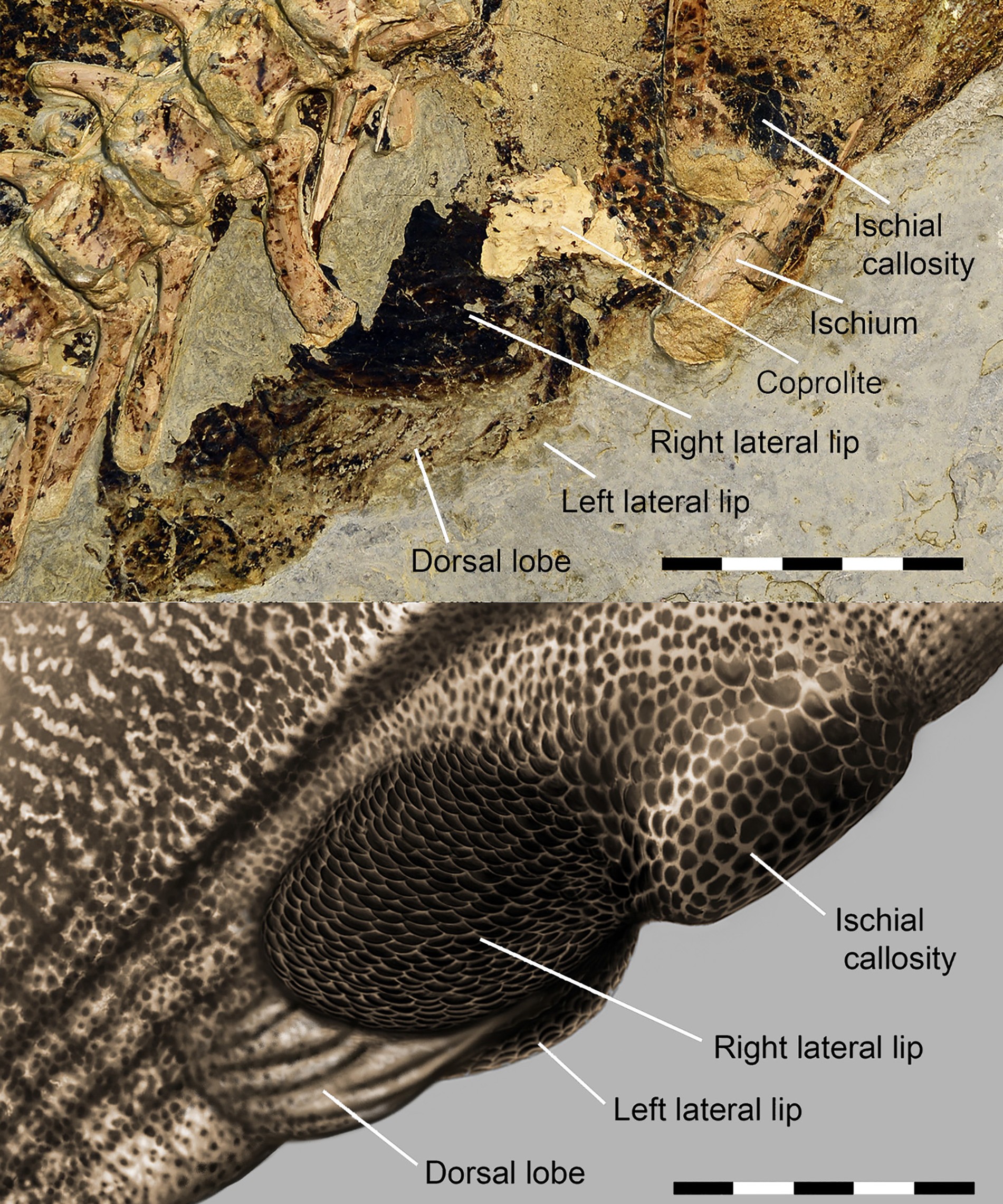 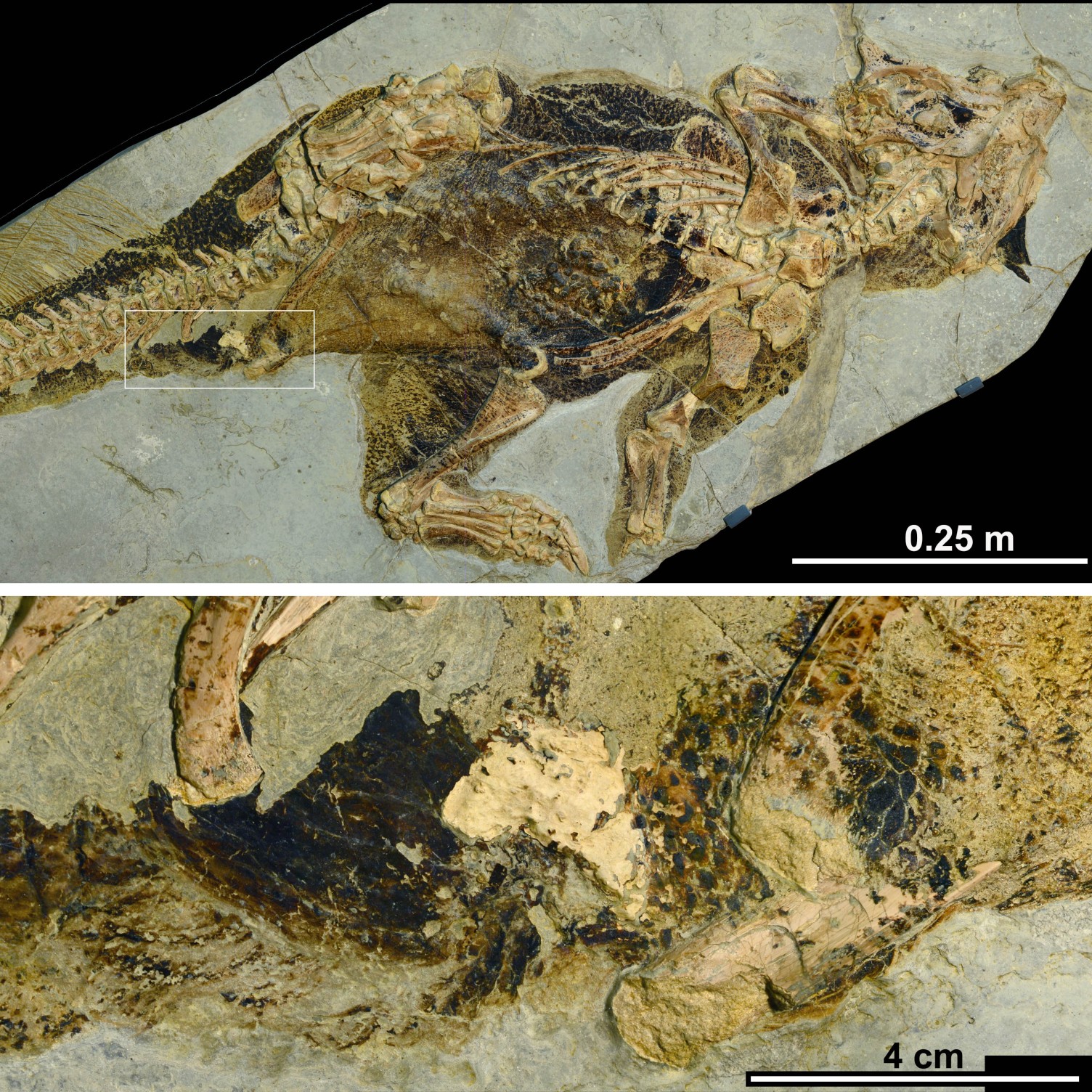 Psittacosaurus specimen from Senckenberg museum of Natural History, preserving skin and pigmentation patterns and the first, and only known, cloacal vent Jakob Vinther, University of Bristol and Bob Nicholls/Paleocreations.com 2020

For the first time ever, a team of scientists, led by the University of Bristol, have described in detail a dinosaur’s cloacal or vent – the all-purpose opening used for defecation, urination and breeding.

Although most mammals may have different openings for these functions, most vertebrate animals possess a cloaca.

Although we know now much about dinosaurs and their appearance as feathered, scaly and horned creatures and even which colours they sported, we have not known anything about how the vent appears.

Dr Jakob Vinther from the University of Bristol’s School of Earth Sciences, along with colleagues Robert Nicholls, a palaeoartist, and Dr Diane Kelly, an expert on vertebrate penises and copulatory systems from the University of Massachusetts Amherst, have now described the first cloacal vent region from a small Labrador-sized dinosaur called Psittacosaurus, comparing it to vents across modern vertebrate animals living on land.

Dr Vinther said: “I noticed the cloaca several years ago after we had reconstructed the colour patterns of this dinosaur using a remarkable fossil on display at the Senckenberg Museum in Germany which clearly preserves its skin and colour patterns.

“It took a long while before we got around to finish it off because no one has ever cared about comparing the exterior of cloacal openings of living animals, so it was largely unchartered territory.”

Dr Kelly added: “Indeed, they are pretty non-descript. We found the vent does look different in many different groups of tetrapods, but in most cases it doesn’t tell you much about an animal’s sex.

“Those distinguishing features are tucked inside the cloaca, and unfortunately, they’re not preserved in this fossil.”

The cloaca is unique in its appearance but exhibits features reminiscent to living crocodylians such as alligators and crocodiles, which are the closest living relatives to dinosaurs and other birds.

The researchers note that the outer margins of the cloaca are highly pigmented with melanin. They argue that this pigmentation provided the vent with a function in display and signalling, similar to living baboons and some breeding salamanders.

The authors also speculate that the large, pigmented lobes on either side of the opening could have harboured musky scent glands, as seen in living crocodylians.

Birds are one the few vertebrate groups that occasionally exhibit visual signalling with the cloaca, which the scientists now can extend back to the Mesozoic dinosaur ancestors.

Robert Nicholls said: “As a palaeoartist, it has been absolutely amazing to have an opportunity to reconstruct one of the last remaining features we didn’t know anything about in dinosaurs.

“Knowing that at least some dinosaurs were signalling to each other gives palaeoartists exciting freedom to speculate on a whole variety of now plausible interactions during dinosaur courtship. It is a game changer!”

‘A cloacal opening in a non-avian dinosaur’ by J. Vinther, R. Nicholls and D. Kelly in Current Biology