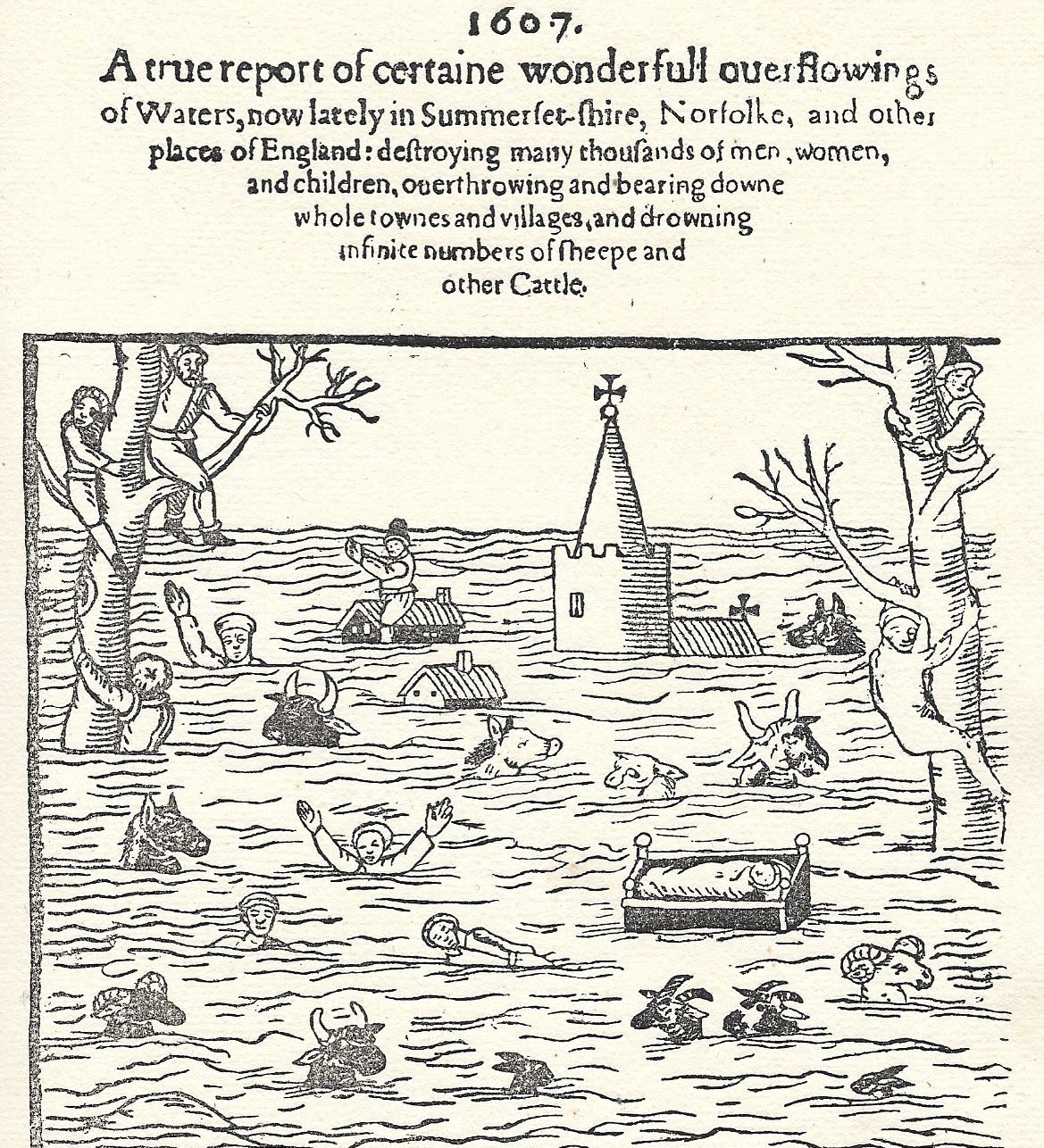 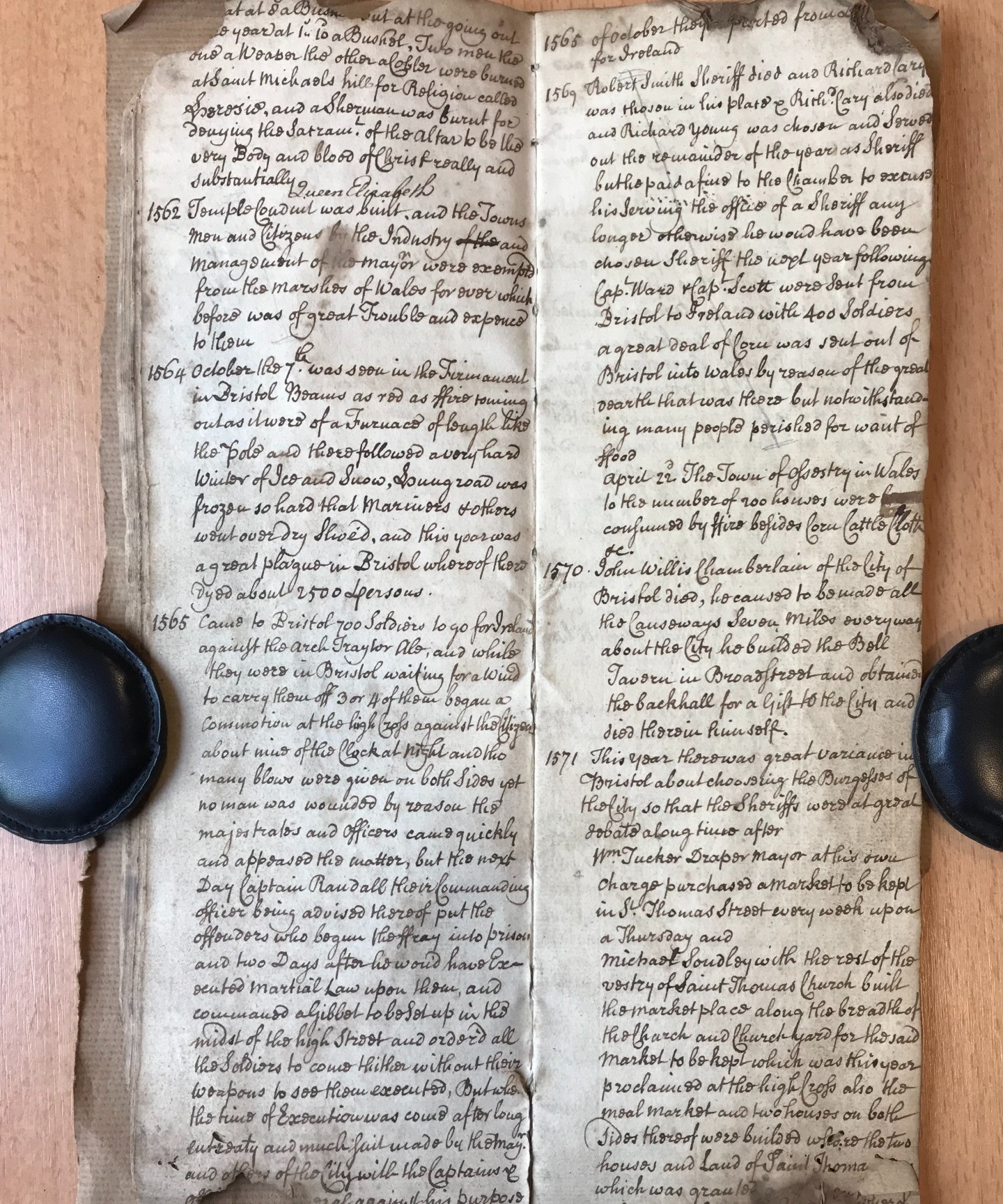 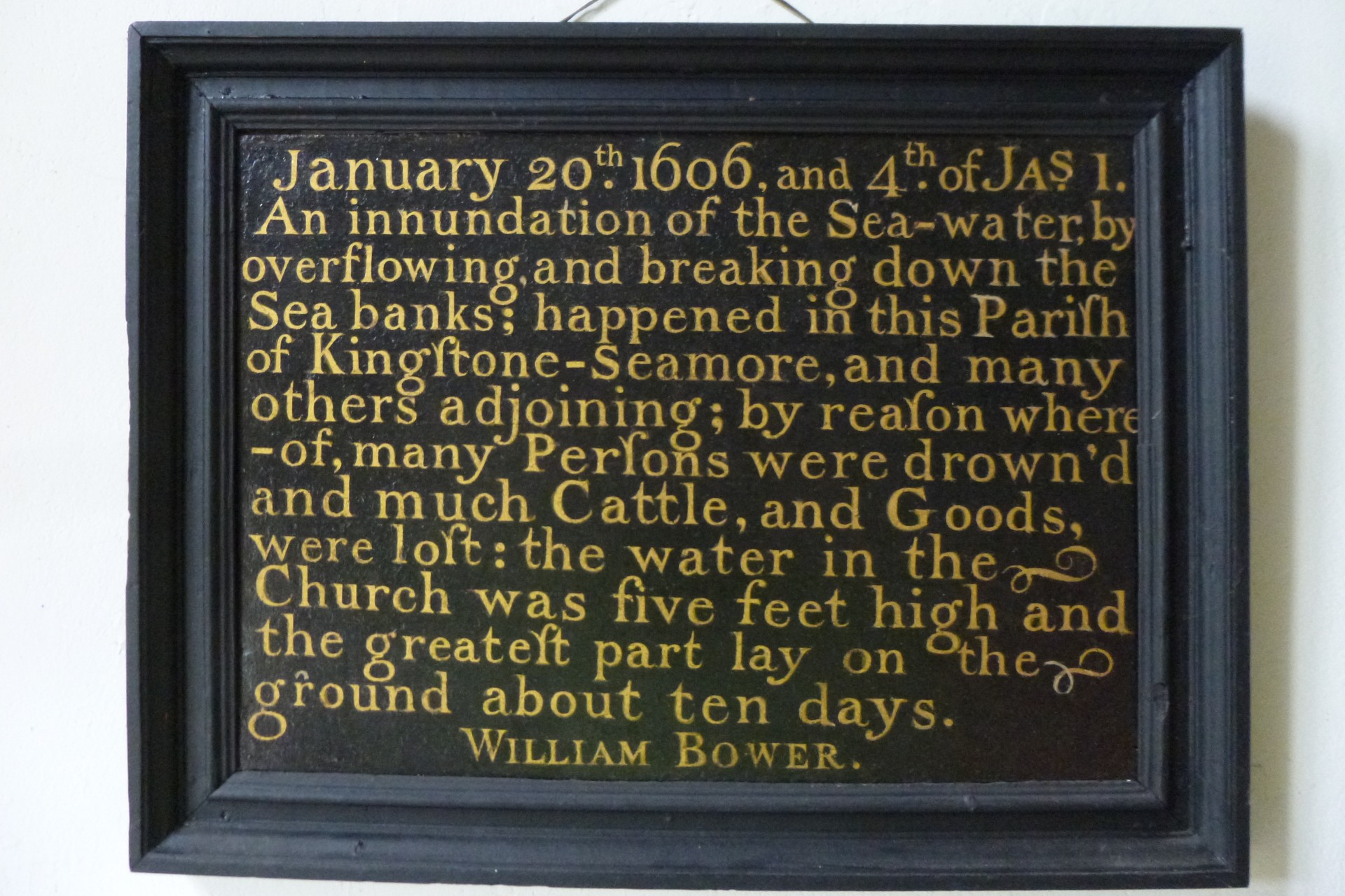 Flood Plaque Jan 1607 – Plaque in Kingston Seymour, one of the churches flooded in Jan 1607 (plaque says 1606 because the start of the year was normally taken to be 25 March in this period) University of Bristol

Historians from the University of Bristol have discovered contemporary accounts of numerous weird weather events that happened in the Bristol area around the turn of the 16th/17th century including devastating floods, massive snowfalls and frosts that saw rivers frozen for months.

The detail comes from a chronicle that was acquired by Bristol Archives in 1932 but then declared as ‘unfit for production’ due to its extremely fragile nature. Access to the manuscript was very limited making it difficult to investigate its contents.

Using digital photography, a team led by Dr Evan Jones from the University of Bristol’s Department of History, has now painstakingly transcribed the document which is named 09594/1.

Chronicle writing dates back to the early medieval period and record events of a community that are relevant to it as a reference work for future readers. Early chronicles were mostly produced by religious communities but as time went on town clerks and private families kept them as well. They recorded the most memorable events of that particular year – such as wars, rebellions, plagues and fires.

Dr Jones and his team concluded that 09594/1 was probably not begun until the late 17th century. It was then updated regularly until 1735 by different people (probably from the same family). It also includes detail dating back as far as the 13th century which would have been taken from older chronicles or manuscripts.

What drew the researchers’ particular attention amongst the more expected entries, was a vivid series of descriptions of extreme weather-related events that occurred in the Bristol area from the 1560s to the 1620s.

Together with an environmental scientist from University College London (UCL), the Bristol researchers have written about what they discovered, and the impact of this climatic deterioration on the city of Bristol, in the Royal Meteorological Society’s journal Weather.

Four hundred years ago, England experienced some of its worst weather ever. In the depths of the Little Ice Age (1300-1800), huge volcanic eruptions in the Americas pushed dust and gases high into the atmosphere, blocking out the sun. The related cooling phase is known as the ‘Grindelwald Fluctuation’ (1560-1630).

The chronicle entries, seemingly written by a Jacobean weather enthusiast, describe how Bristol and its wider region was affected. Crop failures, famines, great freezes, floods, unseasonal blizzards, tempests and droughts all feature in the accounts of these ‘strangely altered’ times.

These are just a few of the chronicle’s entries, the severity of which can be corroborated from other sources. Some of the events were even illustrated in news pamphlets - the popular press of the day.

It was not just in Bristol that the weather was extreme. The Freeze of 1607-8 led to the first Frost Fair upon the Thames in London. The storms and famines discussed in the Bristol chronicle wrecked shipping and caused mass starvation across the world.

In Shakespeare’s England, tempests were well known and the ‘strange alterations of times and seasons’ was recognised by the journalists of the day. As one 1613 news pamphlet reports: ‘We have within these few years, as well within this our native country of England as in foreign nations, been most grievously stricken... by dry summers, and parching heats, droughts...to cause barrenness with scarcity, then freezing and cold winters’.

Professor Anson Mackay, one of the co-authors of the article from UCL, said: “The Little Ice Age was the coldest period since the start of the Holocene (almost 12,000 years ago).

“The cooling period from 1300-1800 was a time of global climatic change, but one that was very different to modern global warming. Back then, volcanic eruptions and changes in the world’s ocean circulation all played a role. Today, increases in greenhouse gases are the driving force behind global warming.”

Dr Jones added: “What I love about this chronicle is the vividness of the language. But the author was still trying to be measured and fact-based. Contemporary observers didn’t have objective systems of weather measurement, but they made an honest attempt to evaluate these events in relative terms.”

One such episode was the Great Flood of 1607, recorded in the chronicle. The flood is currently being studied by Rose Hewlett, the article’s third author, who notes that the height of the water can still be seen on flood markers in churches around the estuary.

The chronicle states that in Bristol itself ‘all the lower part were drowned about four or five foot’ while the flood 'came so fast and high at Henbury that the waters continued a long time a fathom deep that the people were obliged to abide on the trees two or three days’.

What these colourful accounts suggest is that the Grindelwald Fluctuation did not just make the world cold. The disturbed global climate led to more catastrophic weather events.

This, suggests Professor Mackay, is where this study holds lessons for today. He added: “Modern climate change isn’t just making the world warmer, it is also causing more severe weather, which will only get worse. Current modelling suggests that weather-related fatalities in Europe could increase fifty-fold in the coming decades.

“If this proves correct, the news headlines of the future could be as bleak as those of the seventeenth century.”