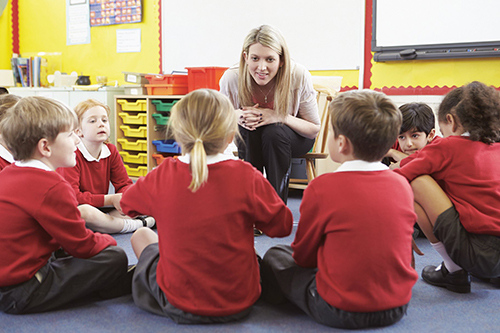 A brain-related visual impairment, which until recently was thought to be rare, may affect one in every 30 children according to new research investigating the prevalence of Cerebral Visual Impairment [CVI]. The University of Bristol-led findings published today [3 February] in Developmental Medicine and Child Neurology, aim to raise awareness of CVI among parents and teachers to help them identify signs of the condition earlier.

The brain is just as important as the eyes when it comes to seeing, and many vision problems are caused by areas of the brain that are needed for sight not working properly and cannot be resolved by wearing glasses. Brain-related vision problems include difficulties with moving the eyes, seeing things in the space around (visual field) and recognising objects accurately and quickly.

While eye chart tests check how well a person can see the details of a letter or symbol from a specific distance, these visual acuity diagnostic assessments miss many children with CVI, whose acuity is normal or near-normal (they can read down a chart). The study, funded by the National Institute for Health Research (NIHR), investigated how many school-aged children may have undiagnosed brain-related vision problems.

Researchers from University of Bristol Medical School collected information about 2,298 children aged five to 11-years across 12 schools using teacher and parent questionnaires. They invited over ten per cent of the children (262 pupils) for a detailed assessment using validated tests to identify children with brain-related visual problems suggestive of CVI.

Dr Cathy Williams, the study’s lead author and Associate Professor in Paediatric Ophthalmology at Bristol Medical School: Population Health Sciences and Consultant Paediatric Ophthalmologist at University Hospitals Bristol and Weston NHS Foundation Trust (UHBW), explained: "While this does not prove that these kind of vision problems are the cause of the difficulties with learning for any particular child, it does suggest that attending to children's visual needs, such as making things bigger or less cluttered, might be a good place to start. If interventions can work to reduce the impact of these problems on children’s learning, it might improve both educational and wellbeing outcomes for children."

The authors recommend in future that detailed vision checking of all children who need extra support at school, as well as the existing paediatrician and educational psychology assessments, could improve outcomes for children.

Dr Williams added: "We would like to thank all the teachers, parents and children who helped support this important study, which is part of the CVI project."

The CVI Project is a five-year programme of NIHR-funded work to investigate how many children have CVI, how best we find them and support them, and what areas of their life are most affected.  For information about the project, visit: www.thecviproject.co.uk/

About Cerebral Visual Impairment (CVI)
Children with brain-related visual impairment, also known as CVI, have difficulty seeing the world around them and this can cause avoidable mental health problems like anxiety and low self-esteem. CVI can manifest in many ways –like being unable to: find things in a cluttered page; or avoid bumping into people; or copy; or change eye position effectively to keep focused on a task. In a primary school–aged child this can appear as failure to understand; as clumsiness or inattention, or as social and communication difficulties. The visual impairment underlying these problems may be hidden as the child may appear to be able to see objects normally. Therefore, their behaviour is put down to other causes and  they may get no support or inappropriate support.

The diagnosis of CVI usually involves input from several sources including parents, eye specialists, teachers, paediatricians and educational or neuropsychologists and is not based on a one-off test. For this reason, the study clearly talks about “CVI-related vision problems” and emphasises no child was diagnosed with anything as this was a study, not a clinical assessment.

The NIHR was established in 2006 to improve the health and wealth of the nation through research, and is funded by the Department of Health and Social Care. In addition to its national role, the NIHR commissions applied health research for the direct and primary benefit of people in low- and middle-income countries, using UK aid from the UK government.