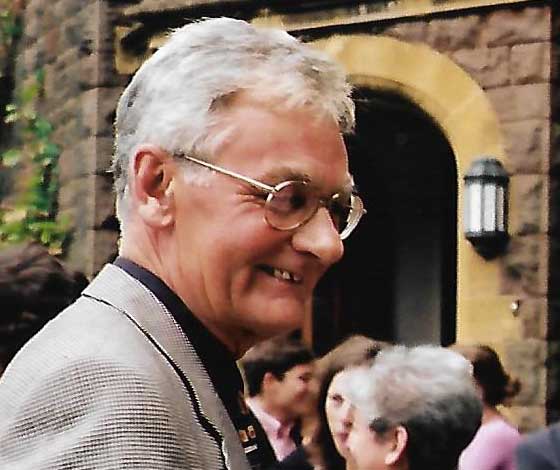 Dr John Hibberd, who played a major role in the life of the German Department from his arrival in 1963 to his retirement in 2000 and beyond, passed away earlier this month. This appreciation of his life and career as a teacher, translator and researcher also appears on the department's webpages.

John was born in Shinfield near Reading, only son of the village baker in 1938. He attended the village school, was the only one to pass the 11 plus that year and went on to Reading School where he met his life-long friend, Joe Leighton. They were 2 of the 3 “country boys” in his year. His school inspired in him a love of European languages and literatures, and this interest was encouraged by early (and very basic) camping trips with his adventurous parents to Europe as soon as tourist travel became possible after the war. Following his period of national service, from 1958 John pursued his academic passions with a first degree in French and German at St Edmund Hall, Oxford. He then spent a further year in Oxford, moving on to Heidelberg to complete his B.Litt. There he met Roger Paulin, a close friend and later colleague in Bristol. During this time, his friend Joe Leighton, already on the Bristol German staff, brought John to the attention of Professor August Closs. John was appointed in Bristol, initially as Junior Fellow in German, in 1963.

Bristol clearly agreed with John, who married Susan two years later and spent the whole of his career in the German Department apart from a year’s job swap with a colleague at Monash University in Melbourne. Susan remembers that Professor Closs expected his staff to teach broadly across the whole range of German literature, such that John’s repertoire became very broad, even while he simultaneously completed his PhD on the works of the 18th-century writer Salomon Gessner under the supervision of Bristol’s other legendary German professor, Hans Reiss.

John’s highly appreciated teaching included comparative European literature and units offered jointly with colleagues in the French department. Since John not only taught but also published on Franz Kafka, his name became known to students in the UK and far beyond, just as his steady stream of academic articles and reviews, latterly with a focus on Hebel, Kleist and Wedekind, assured his place as a widely respected scholar in German studies. John’s fine translations of Hebel were published by Libris Books and taken over as a Penguin Classic, entitled The Treasure Chest. A selection of the stories, read by Mark Williams was broadcast on Radio 4. He was delighted when Judith Weir set one of them to music.

With increasing seniority, John became central to the smooth running of the department rather before his appointment as its head in 1994. Following a long period with a settled staff establishment, John oversaw the department’s renewal in this last period of his career. Always forward-looking, he recognised that the discipline was broadening beyond literature into film, history and linguistics, and made new appointments of younger colleagues which reflected this trend. John’s careful balance of established and new strengths ensured that the Bristol department remained attractive and broadly based through a challenging period for modern languages nationally. John also successfully and efficiently navigated the new challenges of research and teaching quality assessments as the higher education environment evolved far from the assumptions of previous decades.

At John’s retirement in 2000, he was able to hand on a German department whose success and popularity was in large measure his achievement, and with solid foundations on which his successors have relied in subsequent years. He was a wise and generous colleague, with a quiet but pronounced sense of humour and a deep humanity. With great pragmatism and on occasion deep wells of patience, he was able to reassure and lead established colleagues through the new challenges of the 1980s and 1990s; he actively supported and mentored his younger colleagues up to his retirement and beyond. His research and participation in the life of the department continued as a Senior Research Fellow. John was known, liked and respected by colleagues right across the university. Over lunch at the Senior Common Room and later the Hawthorns he would regularly catch up with friends from across Arts and the other faculties. His retirement party, held jointly with Professor Skrine at The Holmes, was a joyful celebration of a highly successful career, and was attended by large numbers from across this university and beyond.

A Bristol University man through and through, and a Friend of Bristol Art Gallery outside work, John was doubtless happiest walking his dogs, and at home with Susan and his two children, Julian and Judith, of whom he was immensely proud. John’s wisdom and generosity of spirit continue to inspire us. He will be very sadly missed and our thoughts are with Susan and his family.