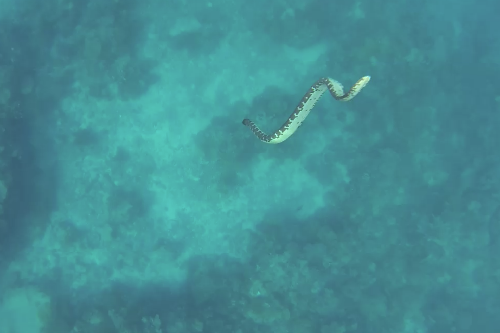 New research has revealed the evolution of colour vision in elapid snakes following their transition from terrestrial to fully marine environments, and for the first time, provided evidence of where, when and how frequently the species have adapted their ability to see in colour.

Published in the journal Current Biology, the study is an international collaboration between the University of Adelaide, the University of Plymouth, University of Bristol and The Natural History Museum, London, and others, involving scientists from the UK, Australia, Denmark, Bangladesh and Canada.

The research suggests sea snakes’ vision has been modifying genetically over millions of generations, enabling them to adapt to new environments and meaning they can continue to see prey – and predators – deep below the sea surface.

He said: “Sea snakes first entered the marine environment 15 million years ago and have been evolving ever since to survive in its changing light conditions.

“All snakes are descended from highly visual lizards, but advanced colour vision was lost in the early ancestors of snakes – probably because they inhabited dim-light environments.

“We used sequencing of vision genes and spectrophotometry to reveal that sea snakes have undergone rapid changes in their visual pigments compared to their relatives on land.

“Gene losses during snake evolution have left living snakes with only two types of cone opsin, which are the pigments responsible for detecting bright light.

“In most terrestrial snakes, the short wavelength sensitive cone opsin (SWS1) has peak sensitivity to ultraviolet (UV) light. But in sea snakes this pigment has undergone repeated shifts into the visible spectrum, which would be beneficial for vision underwater, where longer wavelengths dominate.”

Many living things have pairs of chromosomes (inherited from each parent) and consequently have two different copies of the same gene (alleles). The researchers were surprised to find that some sea snakes possessed two genetic alleles of the SWS1 gene, one with peak sensitivity to UV light and the other to visible (blue) light.

Because these alleles appear to have been retained across species during millions of years of sea snake evolution, they concluded that this spectral polymorphism was maintained by natural selection because it may confer expanded colour sensitivities.

Senior scientist on the report, Dr Kate Sanders, Associate Professor at the University of Adelaide, says their research also suggests that diving sea snakes actually share their adaptive properties not with other snakes or marine mammals, but with some fruit-eating primates.

“Like sea snakes, marine mammals such as whales and seals are descended from terrestrial ancestors.

“Where sea snakes have evolved new visual abilities not seen in their closest terrestrial relatives, the visual systems of whales have degenerated since their separation from land mammals.

“An interesting comparison can also be made between sea snakes and primates; some fruit eating primates have expanded colour sensitivities attributed to the retention of different alleles of their long wavelength sensitive opsin.

“Our study suggests an intriguing parallel in diving sea snakes, but we have a lot to learn about the ecological and genetic mechanisms at play in sea snake visual evolution.”

‘Spectral diversification and trans-species allelic polymorphism during the land to sea transition in snakes’ by B. Simões, D. Gower, A. Rasmussen, B. Chang, D. Pisani and K. Sanders in Current Biology