Insect crunching reptiles on ancient islands of the UK 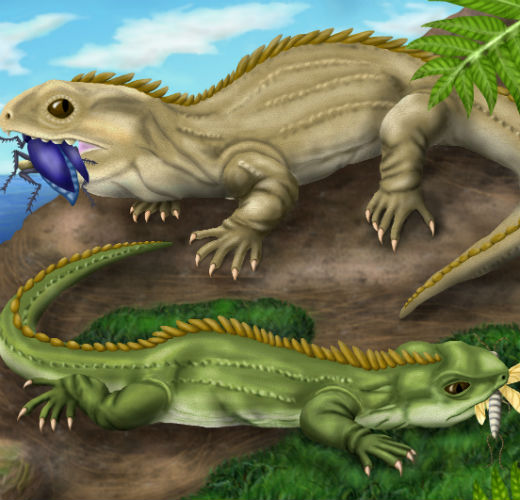 By analysing the fossilised jaw mechanics of reptiles who lived in the Severn Channel region of the UK 200-million-years ago, researchers from the University of Bristol have shown that they weren’t picky about the types of insects they ate - enjoying both crunchy and less crunchy varieties.

The study, published today in the journal Palaeontology, describes how the team analysed the biomechanics of the skulls of some early lizard-like reptiles called rhynchocephalians to explore their diets.

Around 200-million-years ago, the Severn Channel area in southern Wales and south-western England was in tropical waters, and these surrounded a system of islands that were inhabited by dinosaurs and diverse small lizard-like reptiles.

The area was further south than it does today, at about the same latitude as Morocco. The sea level was higher, meaning that the peaks of limestone hills south of Bristol and in South Wales formed islands, rather like Florida today.

The islands were inhabited by dinosaurs, early mammals, rhynchocephalians and many other fossil reptiles, feeding on the rich, tropical plants and insects.

PhD student, Sofia Chambi-Trowell, from Bristol’s School of Earth Sciences, worked on CT scanned skulls of these ancient rhynchocephalians and found differences in their jaws and teeth.

She said: “I looked at skulls of two closely related species of Clevosaurus, Clevosaurus hudsoni and the slightly smaller Clevosaurus cambrica – the first one came from a limestone quarry near Bristol, and the other one from South Wales.

“Clevosaurus was a lizard-like reptile, but its teeth occluded precisely, meaning they fit together perfectly when it was feeding. But what was it eating?”

The team found that Clevosaurus had bite forces and pressures sufficient to break down beetles, and even small vertebrates easily, suggesting they could have taken the same prey items as the early mammals on the islands. Calculations of muscle forces show that Clevosaurus hudsoni could take larger and tougher prey than the more slender jaws of Clevosaurus cambrica.

Project Supervisor, Professor Emily Rayfield, added: “We wanted to know how Clevosaurus interacted with the world’s first mammals, which lived on the Bristol islands at the same time. I had studied their jaw mechanics a few years ago, and found they had similar diets, and that some fed on tough insects, others on softer insects.”

Co-author, Dr David Whiteside said: “Our work is a great example of how modern technology like CT scanning can open up information we would not know about. It took a lot of work, but Sofia has uncovered a good explanation of how many species of Clevosaurus could live side by side without competing over food.”

‘Biomechanical properties of the jaws of two species of Clevosaurus and a reanalysis of rhynchocephalian dentary morphospace’ by S. Chambi-Trowell, D. Whiteside, M. Benton and E. Rayfield in Palaeontology