Significant number of Halal meat-eaters might be persuaded to switch to 'stunned' meat, survey suggests 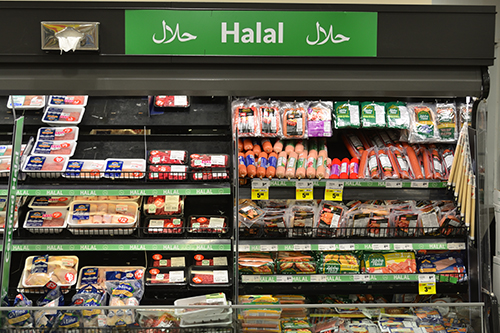 A significant number of British Halal meat-eaters might be persuaded to switch to meat from stunned animals, if they were reassured that some forms of stunning are compatible with Halal rules, suggest the results of a survey published in Vet Record this week.

The UK may need to adopt the New Zealand model, which has done just that, say the researchers from the University of Bristol Vet School.

The Halal meat sector is one of the fastest growing in the meat industry in Britain, with supermarket chains scrambling for a share of the market. In 2015 Halal slaughter in Britain accounted for more than 40 per cent of sheep and goats (small ruminants), but had increased to 70 per cent by 2018.

And it is expected to grow further, because Muslims, who are the main consumers of Halal meat, generally eat above average quantities of meat, and their number is expected to increase to around 7.5 per cent of the population of England by 2050.

But there are animal welfare issues associated with the slaughter of animals without prior stunning, because of the distress caused during and after neck cutting, say the researchers.

For meat to be considered Halal, it must come from animals slaughtered in accordance with rules set out in the Quran and other Islamic scriptures. These require the animal to be alive when its neck is cut, but not necessarily conscious, and for sufficient time to be allowed for bleeding out.

The researchers wanted to gauge the frequency of meat consumption among a representative sample of 250 Halal meat eaters in England, and to find out their meat preferences, including those based on slaughtering method.

The responses showed that most people (51 per cent; 128) ate meat at least once a week, with a similar proportion (45.5 per cent; 113) eating it at least daily. Most respondents (85.5 per cent; 210) said they bought their meat from local Muslim butchers.

But 16 people (6.5 per cent) said they didn’t understand the meaning of the different methods of slaughter, while nine per cent (22) indicated they didn’t mind which method had been used.

"Stunning is a relatively new slaughter technology, which was discovered many centuries after the Quran was revealed," pointed out the researchers.

"It has been suggested that some Muslims avoid meat from stunned animals because of doubts over the compatibility of stunning with the Halal rules--that is, the possibility of some animals dying as a consequence of the stun, or the belief that stunning obstructs blood loss," they added.

New Zealand has introduced a Halal quality assurance system that reassures Muslims that some methods of stunning, such as electrical head-only, don’t result in the animal’s death before its neck is cut, and that blood loss causes the death.

"To increase consumer confidence in stunned products, the UK may need to consider a similar model to the New Zealand system," said the researchers, highlighting the significant proportion of survey respondents who were either unsure about the Halal status of stunned meat, or who would eat stunned meat if there were no alternative.

"[They] are more likely to be persuaded to consume meat from stunned animals if they could be given reassurance that some forms of stunning (eg electrical head-only) were compatible with the Halal rules," they concluded.

'The ethics of Halal meat consumption: preferences of consumers in England according to the method of slaughter, by Toby Knowles and Awal Fuseini in Vet Record