Research into how human sperm swim in 3D 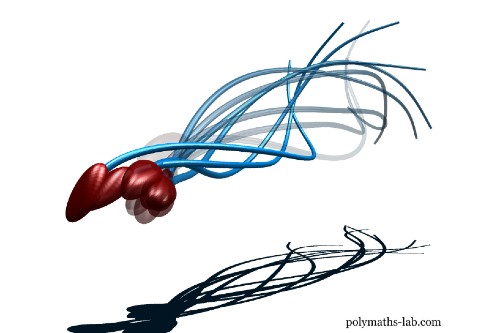 Illustration of the sperm tail moving rapidly in 3D. polymaths-lab.com

Using state-of-the-art 3D microscopy and mathematics, Dr Hermes Gadêlha from the University of Bristol, Dr Gabriel Corkidi and Dr Alberto Darszon from the Universidad Nacional Autonoma de Mexico, worked to reconstruct the movement of the sperm tail in 3D with high-precision.

This press release was updated and reissued on 12 August following concerns about some of the mathematical conclusions in the original paper. To ensure scientific clarity, the researchers made the decision to retract the paper - please see below for statement of retraction.

Using a high-speed camera capable of recording over 8,000 frames in one second, and a microscope stage with a piezoelectric device to move the sample up and down at an incredibly high rate, they were able to scan the sperm swimming freely in 3D.

“Human sperm roll as they swim, much like playful otters corkscrewing through water to swim forwards,” said Dr Gadelha, head of the Polymaths Laboratory at Bristol’s Department of Engineering Mathematics and an expert in the mathematics of fertility.

“The otter-like spinning of human sperm is however complex: the sperms’ rapid and highly synchronised spinning causes the tail to rotate around the swimming direction, drilling into the fluid with helical waves.”

“The centreline of the 3D tail shows travelling waves of changes in chirality, known in mathematics as perversion. This is similar to the changes in spiralling direction we see in plant tendrils. We now know that these perversion waves are correlated to the spinning movement of the sperm’s head.”

Computer-assisted semen analysis systems in use today, both in clinics and for research, still use 2D views to look at sperm movement. We can now see that 2D projections of sperm swimming can introduce inaccuracies in how we see the tail’s movement. Novel use of 3D microscope technology combined with mathematics, may provide fresh avenues for unlocking the secrets of human sperm swimming.

“With over half of infertility caused by male factors, understanding how the human sperm tail moves is fundamental to developing future diagnostic tools to identify unhealthy sperm,” adds Dr Gadelha, whose work has previously revealed the biomechanics of sperm bendiness and the precise rhythmic tendencies that characterise how a sperm moves forward.

*This story replaces the original version published on 31 July.

Since publication, the researchers have extensively discussed the findings with the scientific community, which brought to light that although the 3D flagellar experimental data and analyses are sound, the conclusion of flagellar asymmetry and anisotropy cannot be drawn unequivocally using only the 3D flagellar waveform data available in this study. Because of this, the researchers have conducted further scientific investigations and experimental measurements that have revealed novel layers of complexity in the flagella’s movement. As a result, the description of asymmetry and anisotropy in the article is currently incomplete. To ensure scientific clarity, the researchers have made the decision to retract the paper with the view that they will shortly publish an updated paper compiling the complete story. This was communicated as soon as it became apparent to the journal Science Advances.

The University of Bristol and its researchers are committed to the integrity of scientific research and welcome input and debate from the scientific community which contribute to the advancement of science.

The authors’ retraction note may be found here: