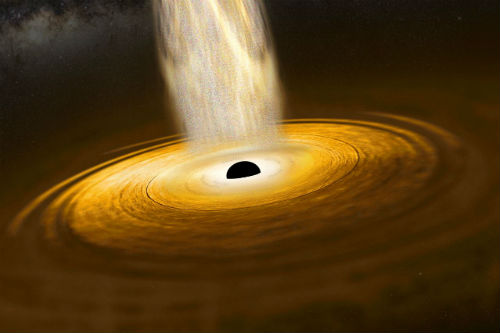 Artist impression shows the surroundings of a black hole feeding on ambient gas. As this material falls into the black hole, it spirals around to form a flattened disc, as shown here, heating up as it does so. At the very centre of the disc, close to the black hole, a region of very hot electrons – with temperatures of around a billion degrees – known as the corona produced high-energy X-rays that stream out into space. ESA

Material falling into a black hole throws X-rays out into space – and now, for the first time, the European Space Agency’s (ESA) XMM-Newton X-ray observatory has used the reverberating echoes of this light to map the dynamic behaviour and surroundings of a black hole itself.

Although most black holes are too small on the sky for us to resolve their immediate surroundings, we can explore these mysterious objects by watching how matter behaves as it nears, and falls into, them.

As material spirals into a black hole, it emits X-rays that echo and reverberate as they interact with nearby gas. This region of space is highly distorted and warped due to the extreme nature and crushingly strong gravity of the black hole.

For the first time, researchers have used XMM-Newton to track these light echoes and map the surroundings of the black hole at the core of an active galaxy named IRAS 13224–3809. This is one of the most variable X-ray objects in the sky, undergoing very large and rapid fluctuations.

The team was supported by Dr Andrew Young, an astrophysicist from the University of Bristol’s School of Physics, who helped interpret the data and is a co-author of the paper which is published in the journal Nature Astronomy.

Lead author, Dr William Alston from the University of Cambridge, said: “Everyone is familiar with how the echo of their voice sounds different when speaking in a classroom compared to a cathedral – this is simply due to the geometry and materials of the rooms, which causes sound to behave and bounce around differently.

“In a similar manner, we can watch how echoes of light propagate in order to map out the geometry of a region and the state of a clump of matter before it disappears into a black hole. It’s a bit like cosmic echolocation.”

This in-spiralling material forms a disc as it falls into the black hole. Above this disc lies a region of very hot electrons – on the order of a billion degrees – called the corona. The researchers expected to see the reverberation echoes they used to map the region’s geometry, but also spotted something unexpected: the corona changed in size incredibly quickly, over a matter of days.

Dr Alston added: “As the corona’s size changes, so does the light echo – a bit like if the cathedral ceiling is moving up and down, changing how the echo of your voice sounds.

“By tracking the light echoes, we were able to track this changing corona, and – what’s even more exciting – get much better values for the black hole’s mass and spin than if the corona was unchanging in size. We know the black hole's mass can’t be fluctuating, so any changes in the echo must be down to the gaseous environment.”

The study used the longest observation of an accreting black hole ever taken with XMMNewton: 16 full spacecraft orbits, totalling two million seconds or just over 23 days. This, combined with the strong and short-term variability of the hole itself, allowed the researchers to model the echoes comprehensively over day-long timescales.

The region explored by this study is inaccessible to observatories such as the Event Horizon Telescope, which managed to take the first ever picture of gas in the immediate vicinity of a black hole last year: the hole at the centre of the massive galaxy M87.

Dr Alston said: “That image was obtained using a method known as interferometry which, while a wonderful technique, will only work on the two nearest – and therefore visually largest on the sky – supermassive black holes to Earth: those in M87 and the Milky Way.

“Our approach, however, is able to probe the nearest few hundred supermassive black holes that are actively consuming matter – and this number will increase significantly with the launch of ESA’s Athena satellite.”

Characterising the environments closely surrounding black holes is a core science goal for Athena (Advanced Telescope for High-ENergy Astrophysics), which is scheduled for launch in the early 2030s and aims to unveil the secrets of the hot and energetic Universe.

Measuring the mass, spin and accretion rates of a large sample of black holes is key to understanding gravity throughout the cosmos, and, given that a galaxy’s central black hole is strongly linked to its properties, to our knowledge of how galaxies form and evolve over time.

“This reverberation mapping is an exciting technique, and, in collaboration with missions like Athena, promises to reveal much about both black holes and the wider Universe in coming years. I hope that XMM-Newton will perform similar observing campaigns for several more AGNs in coming years, so that the method is fully established when Athena launches.”

Bristol co-author, Dr Young, added: “It has been a privilege to be part of a fantastic international team that used the European Space Agency’s XMM-Newton X-ray observatory to study a black hole at the centre of a galaxy almost a billion light years away.

“By observing the X-ray light from matter dancing around the black hole before it plunges in, we were able to determine that the black hole is spinning very rapidly and is a couple of million times more massive than the Sun.