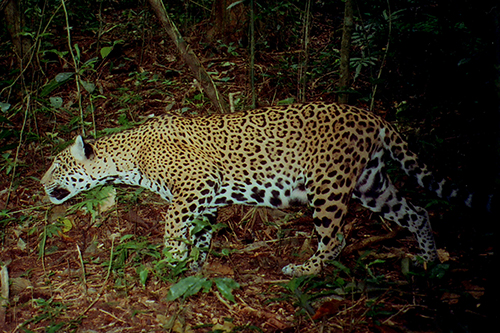 Scientists studying one of the largest populations of jaguars in Central Belize have identified several wildlife corridors that should be protected to help the species survival. The study, led by the University of Bristol and the American Museum of Natural History and published in BMC Genetics, provide a new insight into where conservation efforts should be concentrated.

Jaguars are top predators inhabiting large areas of Belize's tropical forests and have a vast range spanning thousands of square miles. However, high deforestation rates for large-scale agricultural development and a constantly changing landscape mean jaguars are under increased threat and now listed as 'near threatened' on the IUCN red list of threatened species.

Dr Angelica Menchaca, the study's lead researcher, who led the study while a PhD student at Bristol's School of Biological Sciences, said: "Jaguars don't stay in one place and can move long distances often through unprotected areas between reserves. Areas in between national parks with human activity may put jaguars at risk from retaliatory killing, conflict with cattle ranchers and limit connectivity between reserves."

In order to improve conservation and management issues, the team monitored genetic population structure and predicted jaguars' movement corridors to understand how they relate to each other, and how feasible it is to maintain connectivity between reserves.

Dr Menchaca and colleagues analysed samples of jaguar faeces collected over eight years of field work in central Belize, a region which is of great importance for jaguar connectivity as it forms a bridge between the Selva Maya extending to Guatemala in the south, and Mexico in the north.

The team identified 50 different jaguars and observed high levels of gene flow within animals identified in the Cockscomb Basin Wildlife Sanctuary and the Maya Forest Corridor, making these two areas critical for conservation efforts. These areas are currently separated by Hummingbird highway but can potentially be connected through wildlife corridors and the expansion of natural protected areas.

Dr Menchaca added: "Our findings provide a screenshot of genetic patterns of animals inhabiting the area between 2003-2011 and provide important insight into the best routes for the jaguars to take across two key areas in Central Belize. If we are to help this threatened species, then our conservation efforts must expand protected areas to ensure the maintenance of this threatened species across its range."

The study was funded by Panthera, the Sackler Institute for Comparative Genomics at the American Museum of Natural History and the National Council of Science and Technology (CONACYT).