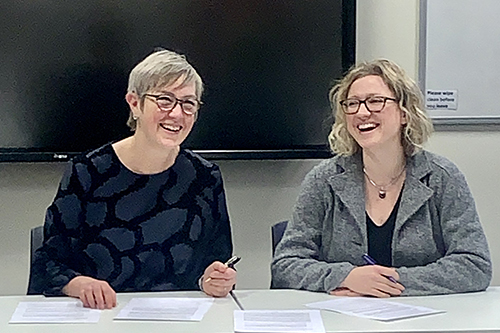 Ambitious plans to eliminate the gender pay gap at the University of Bristol have been set out in a landmark agreement.

It’s the first agreement of its kind at a UK university and follows 18 months of productive negotiations.

The median pay gap between women and men at the University of Bristol is 13.6 per cent, which is below the national average in UK higher education of 15.1 per cent and below the UK-wide gap of 17.9 per cent.

The University and Bristol UCU have now agreed a series of measures to tackle gender pay inequality at Bristol which include:

The Union said that increasing opportunities for advancement was crucial in tackling the gender pay gap, as more women at the University were employed in research-only and teaching-focussed roles, which often have less opportunity for career progression.

UCU said it also welcomed the move to invite all candidates to discuss flexible working and job share options when applying for jobs at the university.

The University will gather data from all departments in areas such as part-time work and flexible working requests to ensure future plans to address the issue are based on the best possible evidence.

Professor Judith Squires, Deputy Vice-Chancellor and Provost at the University of Bristol, said: "This agreement with UCU signifies our commitment to eliminating the gender pay gap.

"The University of Bristol and UCU have been working together on this issue since 2018 and have made real progress since then with new initiatives to support women's career development and a new academic promotions framework.

"But there is still more work to do, and this new agreement outlines key actions which will help to achieve our shared aim. We’re proud to be leading the way on such an important issue and hope this collaborative approach may act as a positive catalyst for change on the gender pay gap in the sector as a whole."

Suzy Cheeke, Vice-president of Bristol UCU, said: "This landmark agreement shows what can be achieved when universities work with us to tackle a problem head on. We now have a series of measures in place to deliver real positive change for women at the University of Bristol."

UCU general secretary Jo Grady said: "Instead of seeking to mitigate the seriousness of issues such as pay equality, casualisation and workloads, institutions across the sector should be looking to follow Bristol's example. Universities now need to put pressure on their representatives to provide firm proposals that address all the issues at the heart of the current disputes."