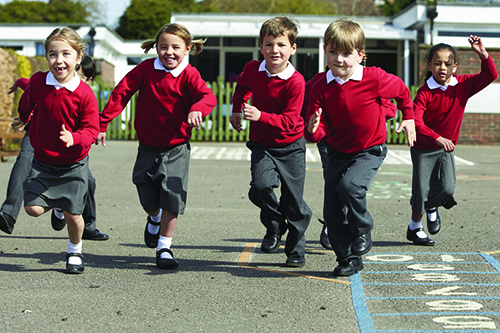 A study evaluating the effectiveness of the widely used ‘Daily Mile’ intervention in schools to tackle childhood obesity has found that the benefits are small, and may be greater in girls than boys.

The study concluded that whilst interventions such as The Daily Mile are not going to reduce childhood obesity alone, they could be an important part of a wider population strategy to tackling this challenge.

Published today [28 January] in the International Journal of Obesity, the study was funded by Birmingham City Council and carried out in collaboration with the Universities of Bristol and Birmingham, Services For Education and Sport Birmingham, with support from the National Institute for Health Research (NIHR).

The Daily Mile was first launched by a school in Scotland in 2012 and sees children spending at least 15 minutes jogging or running, at their own pace, during the school day - exercise which on average equates to approximately one mile and is over and above the national curriculum and timetabled break times.

Over 10,500 schools and nurseries worldwide have adopted the intervention, which is also recommended by the UK Government as part of its plan to tackle childhood obesity, despite no robust evidence of its benefits.

In this cluster-randomised controlled trial, the largest of its kind, researchers set out to evaluate the clinical and cost-effectiveness of The Daily Mile for obesity prevention in children in comparison to schools' usual health and well-being activities.

Forty state-funded Birmingham schools took part in the study, half of which were randomly chosen to implement The Daily Mile intervention, while the other half were randomly placed into a ‘control group’ and implemented only the school’s usual health and well-being activities.

At the start of the trial in April 2017, all participating children were weighed and measured, and their body mass index calculated, as well as percentage body fat. The children’s health-related level of quality of life was also calculated using Quality-Adjusted-Life-Years (QALYs), a metric commonly used to judge cost-effectiveness.

After four months and then again at 12 months, the researchers returned to the schools to carry out the same measurements and calculations.  They found that overall The Daily Mile had more of an effect on the body mass index of children taking part after 12 months compared to those who did not, although the effect was small.

Katie Breheny, Research Associate in Health Economic at the University of Bristol, who carried out the research while at the University of Birmingham, said: "There are anecdotal reports of The Daily Mile having multiple beneficial effects, based on experience in a primary school in Scotland where it was first introduced.

"Another previous and small study, carried out in just two primary schools, also suggested that after introducing The Daily Mile, children became fitter and had some reduction in measures of obesity.

"However, this is the first randomised trial where children in schools that do or do not offer The Daily Mile have been compared."

Dr Sandra Passmore, Senior Advisor at Services For Education in Birmingham, said: "Childhood obesity is a major public health problem, and World Health Organization figures show that globally around one in five children aged five to 19 are either overweight or living with obesity.

"Schools have been identified as a key place to improve physical activity levels, so it is important, that all interventions are tested to ensure the most effective – both clinically and financially - measures are in place.

"This is the first major clinical trial to report on the impact of The Daily Mile in primary and junior schools within a real-world setting and provides invaluable evidence."

Emma Frew, Professor in Health Economics at the University of Birmingham, said: "The potential difference we found of the effect of The Daily Mile in girls compared to boys was surprising, particularly given that most physical activity interventions are usually more effective in boys, and it raises interesting hypotheses and implications.

"If society is willing to pay for an intervention that is highly cost-effective in girls, but not in boys, then we suggest The Daily Mile could form part of a whole system approach to childhood obesity prevention.

"Indeed, it is our hope that our research will lead to a recommendation that all primary and junior schools participate in The Daily Mile, however, we also hope this study highlights that schools alone cannot be responsible for tackling childhood obesity."

Peymané Adab, Professor of Chronic Disease Epidemiology & Public Health at the University of Birmingham, said: "Now further research should be carried out to examine the effects of The Daily Mile on other subgroups of children, including any differences between age groups and children from different socioeconomic backgrounds and ethnicities.

"We also call for further research to explore the impact of The Daily Mile on a wider range of outcomes such as physical activity levels and academic outcomes."

Cllr Kate Booth, cabinet member for children’s wellbeing at Birmingham City Council, said: "It is so important that children are encouraged at an early age to be as active as possible, particularly during the school day when they will spend a lot of time sitting in classrooms. The results of this study are a really good start and it’s great to see Birmingham schools taking part."

‘Effectiveness and cost-effectiveness of the Daily Mile on childhood weight outcomes and wellbeing: a cluster randomised controlled trial’ by Breheney and Passmore et al in International Journal of Obesity

About Services for Education
Services For Education is an education and training charity based in Birmingham that works with 570 schools in the city and across the region.

Established in 2012,  it comprises the School Support Service and the Music Service which is part-funded by the Arts Council, England. It employs 240 staff and has a combined annual income of £8m.

Its School Support Service provides bespoke school improvement consultancy, essential safeguarding and curriculum training and innovative school activities that complement the curriculum and help meet national targets. Through a progressive approach to developing partnerships with Universities, Local Authorities and business, it  brings nationally accredited literacy, numeracy and emotional health development programmes and resources to Birmingham as well as supporting schools in the development of the physical health of pupils, parents and the community.

Its Music Service, which is one of the largest in the country, works across 384 of the city’s schools, teaching music to approximately 38,000 children. It also provides 28,000 musical instruments free-of-charge.