Animals should use short, fast movements to avoid being located 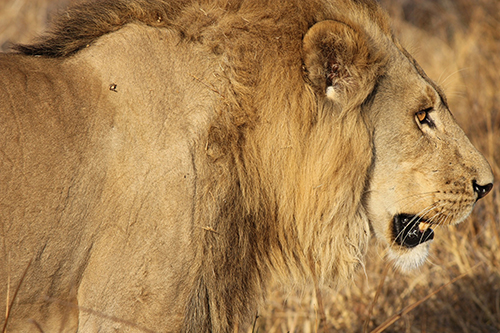 Most animals need to move, whether this is to seek out food, shelter or a mate. New research has shown that movement doesn't always break camouflage and if an animal needs to move, animals that are unpatterned and use short, fast movements are less likely to be located by predators.

In most cases, most of the visual field of a predator does not fall within a high-resolution area and so, when an undetected prey moves, that motion will often be in peripheral vision.  Research by academics at the University of Bristol, published today [15 January] in the Proceedings of the Royal Society B, has investigated how this can be exploited by prey, through different patterns of movement, to reduce the accuracy with which the predator can locate undetected prey when it redirects its gaze toward the target.

Ioan Smart, a former postgraduate at Bristol’s School of Biological Sciences and lead author, said: "Our research has shown that the ability of a predator to localise upon a target in its peripheral vision is influenced by duration, speed and target pattern. Some behaviours can reduce the negative effect that movement can have on camouflage.  Localisation can be reduced, if the moving target is unpatterned, has the mean brightness of the background, it does not use a startle display before moving, and uses short, fast movements."

Using human participants as surrogate predators, tasked with localising upon a target displayed on peripherally viewed computer screens, the researchers quantified the effects of duration, speed and target pattern.

Although movement doesn't help camouflage, the findings have shown that when movement is necessary, some behaviours and surface patterns reduce that cost.

The research has highlighted the importance of addressing ecological problems, while considering the perceptual differences that different regions of the visual field permit.

Further work is required on prey detection and, subsequently, localisation in peripheral vision, as well as how camouflage influences it. Generally, most of the visual field of a predator does not fall within a high-resolution area; and so, when undetected prey move, that motion will often be in the predator’s peripheral vision. The same applies to predators approaching prey.

Furthermore, it will be beneficial for researchers to incorporate a noisy environment into the assessment of localisation accuracy. Noisy environments, such as foliage swaying in the wind, would minimise the prominence of the moving target and, together with the behaviours identified in this study, could reduce the negative effect that movement has on camouflage. Nevertheless, it may be difficult to implement an experiment to measure the localisation accuracy of a target moving within the peripheral visual field through a noisy environment.

The research was supported by the Engineering and Physical Sciences Research Council (EPSRC).

'In the corner of the eye: camouflaging motion in the peripheral visual field' by  Ioan E. Smart, Innes C. Cuthill and Nicholas E. Scott-Samuel in Proceedings of the Royal Society B