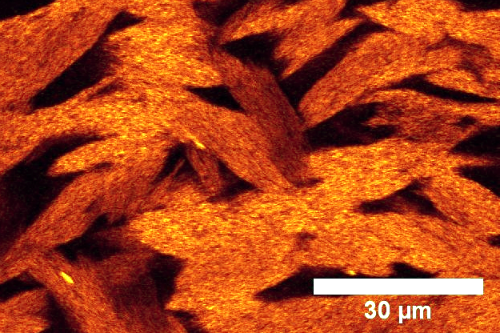 Scientists from the University of Bristol and Université Paris-Saclay have discovered a new class of material – non-sticky gels.

Until now gels have been made of particles that stick to one another to form a network.

The research team, whose findings are published in the journal Proceedings of the National Academy of Sciences, have now shown that networks and from and persist without the particles sticking to one another if the particles behave as liquid crystals.

Professor C Patrick-Royall, from the University of Bristol’s School of Chemistry, said: “Networks of micron — and sub-micron — sized colloidal particles, gels, are absolutely the stuff of everyday life.

“They are found from cosmetics to food and even in biological tissue. Yet our understanding of colloidal gels lags far behind their utility: Gels are out-of-equilibrium, so their properties change over time, often with significant consequences, such as failure or collapse.

“However, until now, we were confident of one thing: To aggregate into a network, the colloidal particles need to attract one another.”

Working with Dr Jeroen van Duijnevelt, also from Bristol, and Claudia Ferreiro-Cordova at Université Paris-Saclay, the team discovered that in fact the colloidal particles don’t need to stick together to form gels.

This new class of material 'non-sticky gels', forms when the colloids instead behave as a liquid crystal.

Liquid crystals, which are fundamental to display technology, are formed when the constituent molecules line up in one direction, while still remaining liquid.

Here, instead of molecules, the colloidal particles, made of sepiolite clay line up preferentially in one direction and form a highly viscous network like conventional colloidal gels, but without needing attractions between the particles to hold them together.

The particles form a microscopic network with a structure a bit like a bird’s nest.

The researchers expect that their discovery will enable the development of new gel formulations with improved mechanical properties and longer shelf-life, which is a major limitation of many products today.