A quarter of puppies are taken from their mothers prematurely 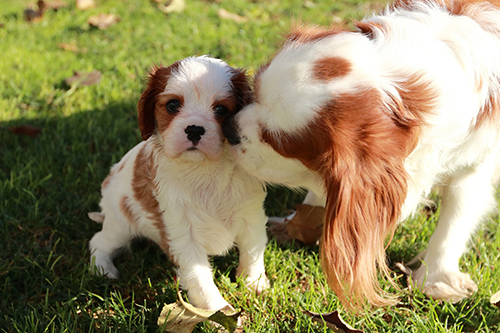 One in four people acquired their puppies before the advised age of eight weeks old, according to new findings from Dogs Trust's pioneering dog welfare study 'Generation Pup'.

The 'cohort' study follows a generation of puppies over the course of their lifetime, to investigate how factors such as environment, social interaction, diet and exercise can impact their development in later life.

The study also found that eight per cent of puppies were acquired without the owner having seen them alongside their mothers, which is also against the advice of UK veterinary organisations and dog welfare charities such as Dogs Trust.

Dr Rachel Casey, Dogs Trust’s Director of Canine Behaviour and Research, said: “The recommendation that puppies spend at least eight weeks with their mothers before going off to their new homes is not always followed, as has been shown in this study.   Through the Generation Pup study, we can investigate the impact that a range of factors including acquisition before eight weeks of age has on the long-term development of puppies.

“Generation Pup is providing us with huge insights into the early stages of life for puppies and will help us understand how to better advise people who want to get a puppy responsibly and make the best decisions for their long term health and behaviour.

“The more puppies that are signed up to the study, the more we will discover about our four legged friends – if you want to sign your puppy up to be one of 10,000 that we will be following, please visit the website.”

Professor Toby Knowles, at the Bristol Veterinary School and a member of the Generation Pup team, added: "We're excited to be able to work with Dogs Trust as part of this ground-breaking study.  These are the first of many more insightful findings that we hope will be revealed from Generation Pup.

"We echo the call from Dogs Trust for dog owners to consider joining the study if they have or are soon to get a new puppy. The greater the number of dogs, and the range of breeds that take part, the more we can do to improve dogs’ lives."

To take part in the Generation Pup study, puppies need to be under 16 weeks of age, and registered with owners living in the UK or Republic of Ireland.

About Dogs Trust
Dogs Trust is the UK's largest dog welfare charity and cares for over 14,300 dogs across its network of 20 rehoming centres in the UK and one in Dublin. Dogs Trust has a non-destruction policy, and will never put a healthy dog to sleep. The charity also focuses its efforts on understanding dogs and sharing that knowledge with the wider public to prevent problem behaviours that can result in relinquishment or abandonment. We are working towards the day when all dogs can enjoy a happy life, free from the threat of unnecessary destruction.