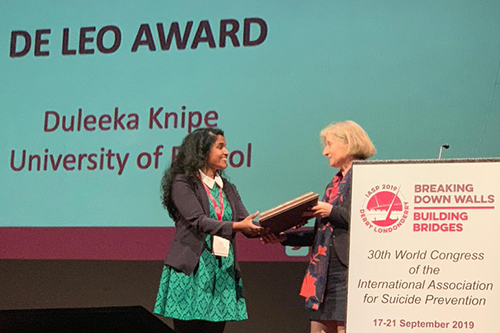 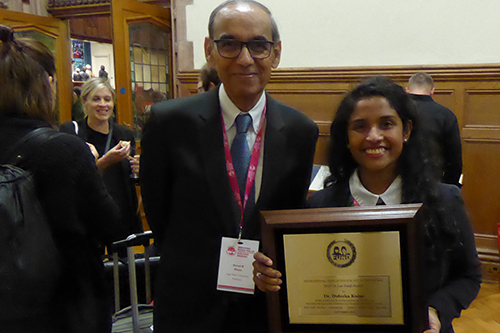 A researcher from the University of Bristol Medical School has received a prestigious international award in recognition of her outstanding research into suicide prevention in low- and middle-income countries.

Dee's research has focused on achieving a better understanding of suicidal behaviour in low- and middle-income countries (LMIC), where 79 per cent of the world’s suicide deaths occur but which attract only a fraction of mental health research funding.

Her interest in this area started when she was appointed research co-ordinator on the world’s largest randomised trial in suicide prevention initiative - a cluster randomised trial of lockable storage devices for pesticides in rural Sri Lanka with 165,000 individuals.

Dee managed the baseline survey and designed all the study databases. This work and her work on investigating the impact of public health interventions (i.e. national* pesticide bans) has contributed significantly to understanding the most effective method of suicide prevention in LMIC.  Her pesticide regulation work is currently being used by the World Health Organisation (WHO) and policy makers in LMIC.

Dr Knipe, commenting on receiving the award, said: "It is truly humbling to receive the De Leo Fund award, but the work I’m being recognised for is not my work alone. I have been tremendously fortunate to be part of a great team of researchers, and to be mentored by world leading academics."

Dee was awarded a Wellcome Trust-funded PhD in 2016 and has since been the recipient of two prestigious post-doctoral fellowships and grant funding totalling £2.5 million.  This has enabled her to continue her work in Sri Lanka, and to expand her research to other LMICs including the Philippines, Nepal, Brazil and Palestine.

The De Leo Fund Award honours the memory of Nicola and Vittorio, children of Professor Diego De Leo, IASP Past President and is given to academics in recognition of their outstanding research on suicidal behaviours carried out in developing countries.

* Dr Knipe's research findings have been used in a BBC news reality check article 'Which countries have banned pesticides used in suicide?' published on 15 September 2019.

As a research-intensive University, Bristol is well placed to develop evidence-based strategies to support student mental health and wellbeing. Bristol's Elizabeth Blackwell Institute has recently announced a new Mental Health in Young People research initiative that will look at ways to improve mental health and wellbeing for young people, with a particular focus on University students.