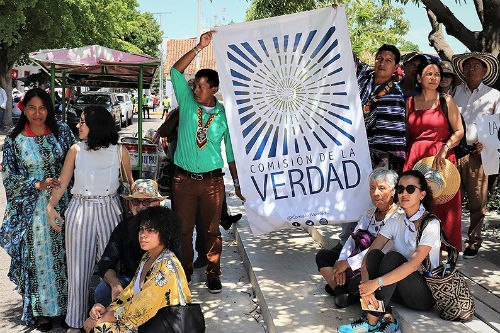 Colombia is at a crucial crossroads in the implementation of its peace accord. A week of public events and activities, organised by the University of Bristol offers an opportunity to reflect upon the innovations and challenges for Colombia’s Truth Commission (CTC) and the legacies of the country’s long tradition of research in historical memory.

Starting on Wednesday 16 October, the University is opening the floor for prestigious visitors from Colombia to explain and debate the achievements and shortcomings of the Transitional Justice system in the country.

The University has been working with the CTC through a variety of Arts and Humanities Research Council (AHRC) and Newton Fund projects led by Dr Julia Paulson from the School of Education and Professor Matthew Brown from the School of Modern Languages.

Events include a talk by Commissioner Carlos Berinstain, who is leading the work with the Colombian Diaspora. He will discuss developments in the Americas and Europe. With the participation of representatives of a hub of civil society organisations, visitors will hear about the work carried out in the UK by the Truth Commission.

The CTC was created as part of the Final Peace Agreement between the government and the Revolutionary Armed Forces of Colombia.

The Kroc Institute has praised it as the most comprehensive peace agreement in the last 30 years. The Transitional Justice system has received the backing of the International Criminal Court and the United Nation Security Council.

The peace agreement started implementation in November 2016, after a first draft was narrowly rejected by Colombians in a Peace Referendum, creating a difficult precedent for peacebuilding.

Alejandra Coll will share the developments of the Commission’s Gender Working Group, where she works. Colombia’s is the first truth commission to have a gender focus cutting across all of its work, an innovation that contributes to the UN women, peace and security agenda, a key agenda also for the UK.

Almost a year, after starting formal activities, the CTC has already carried out two national events to acknowledge the wrongdoings of the past to different sectors of Colombian society: to victims of sexual violence and to women searching for disappeared people.

The CTC has opened regional offices in 30 municipalities in Colombia and many hubs across the world to reach out to all Colombians. Today the CTC is collecting testimonies in many countries and many departments of Colombia.

The CTC is an autonomous transitional justice institution of the Colombian state, which is mandated to deliver in 2021 a final report of the impact of the conflict in Colombians, the acknowledgement of responsibilities by multiple actors and institutions, and offering policy recommendations for healing the social fabric.

On Thursday 17 October the University will host a keynote speech by Gonzalo Sanchez, the former director of the Colombian National Centre for Historical Memory and a member of the Advisory Board of the CTC. He will reflect on the challenges for memory, truth and peace in Colombia based on his long experience of working in these areas. Professor Sanchez is in Bristol as a Benjamin Meaker Distinguished Visiting Professor.

The Colombian week will be brought to a close with the screening of The Witness, a documentary to reflect on the role of photography in a memory and truth-telling process that seeks reconciliation. The writer-director Kate Horne will offer some opening remarks before the film and a panel discussion followed by Q&A.

Dr Andrei Gomez Suarez, Associate Researcher on the Bringing Memories in from the Margins project, from Bristol’s Department of Hispanic, Portuguese and Latin American Studies, which is examining inclusive translational justice and creative processes for reconciliation in Colombia, said: “This is an unprecedented event in the UK. I have worked in the field of Transitional Justice at various UK universities and we had never managed to bring such an important group of people who represent this innovative process that could shed light for peaceful conflict resolution elsewhere in the world.”

Professor Matthew Brown added: “In over 15 years working at the University of Bristol, never before have we hosted an event of this magnitude and transcendence. It is a unique opportunity to learn about the challenges faced in the implementation of the peace agreements in Colombia directly from the people who are delivering innovative answers to seemingly insurmountable historical problems.”

Dr Julia Paulson said: “Now is a crucial time to support ‘abrazar a’ the Colombian peace process, its transitional justice institutions, and the innovations they introduce, including around gender justice, education and justice beyond borders and with Colombians in the diaspora. We are delighted to welcome our colleagues and look forward to learning with them.”