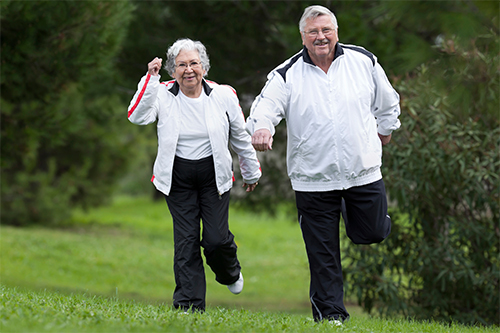 The amount of physiotherapy available following hip and knee replacements comes down to a 'postcode lottery' according to new research led by the University of East Anglia in collaboration with the universities of Bristol and Oxford.

The research also found a range of other factors impacted whether patients received physiotherapy – including the age of the patient, their gender and ethnicity.

Hip and knee replacements are two of the most common surgical procedures performed worldwide. More than 200,000 were carried out in England and Wales in 2017.

Post-operation physiotherapy is recommended for a minimum of six weeks. This can include hydrotherapy, resistance or aerobic exercise, and may be individual or group based. But there is substantial variability in the delivery and content of physiotherapy across NHS trusts.

This is the first nationwide study to investigate and map the provision of physiotherapy after a knee or hip replacement.

The research team studied data from the UK's National Joint Registry – the largest joint replacement registry in the world.

They looked at data collected about more than 37,000 patients in their first year after surgery. They studied the amount of physiotherapy received  and compared it to factors such as the patient’s level of disability, geographical location, age, social deprivation, gender and ethnicity.

"But we found that there is substantial variation in the provision of physiotherapy nationally. And this variation is not explained by the severity of a patient's physical impairment after their operation.

"We also found that there is substantial rehabilitation inequality dependent on age – with young people receiving more physiotherapy. Women were also more likely to receive physiotherapy, as well as non-white people.

"So younger, female patients in urban areas are accessing more physiotherapy after their operations.

"What we don't know yet is exactly what the causes of this disparity are. Individual patient willingness to seek and take part in physiotherapy may be part of the problem.

"But we hope that organisations who aim for parity in service provision across the UK, such as NHS England, Nice and the Quality Care Commission, will act to correct the patient inequality we have shown."

Dr Emma Clark, Reader in Rheumatology in the Musculoskeletal Research Unit at the University of Bristol, added: "This analysis of over 35,000 people after joint replacements showed that access to physiotherapy varies across England, and our results suggest this is not always due to pain or clinical requirement for exercise interventions. Instead the amount of physiotherapy patients can access seems to vary according to where people live, with patients living in the South West less likely to receive physio compared to the rest of England. This inequality is a very concerning finding."

About the National Joint Registry (NJR)
The National Joint Registry (NJR) for England, Wales, Northern Ireland and the Isle of Man collects information on hip, knee, ankle, elbow and shoulder joint replacement surgery and monitors the performance of joint replacement implants. The NJR started collecting data in April 2003 and submission for NHS organisations has been mandatory since April 2011.

A wide range of implants can be used in the joint replacement operations. The registry helps to monitor the performance of these implants and the effectiveness of different types of surgery, improving clinical standards and benefiting patients, clinicians and the orthopaedic sector as a whole. The NJR currently collects data on all hip, knee, ankle, elbow and shoulder joint replacements across the NHS and the independent healthcare sector.