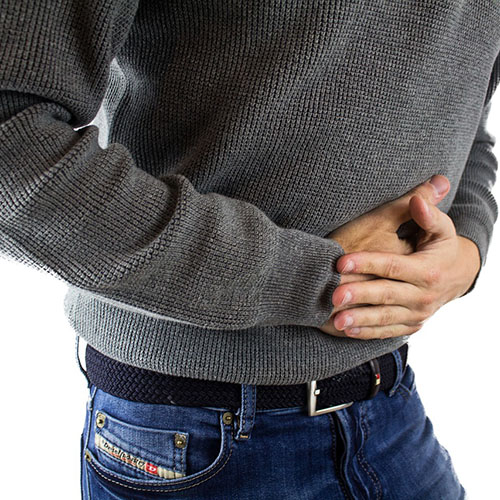 People who have a certain type of bacteria in their guts may be at greater risk of developing bowel cancer. The findings will be presented by University of Bristol researcher, Dr Kaitlin Wade, at the 2019 NCRI Cancer Conference in Glasgow today [Monday 4 November].

While there is increasing evidence that the make-up of the gut microbiome plays a role in the human health and the body's susceptibility to disease including an association between the microbiome and bowel cancer, very few have provided convincing evidence for causality.

The study is the first to use Mendelian randomisation to investigate the causal role played by bacteria in the development of bowel cancer. This scientific technique uses complex statistical analysis of data from large populations to provide evidence for cause and effect, rather than just the existence of an association.

The human gut microbiome is a community of microorganisms, bacteria in this case, that occur naturally in the body. Containing approximately three trillion bacteria, the microbiome aids digestion and provides protection against infections. It is determined by a person’s individual genetic makeup and their environment, so is unique to each person. It also remains relatively stable across a person’s life, unless it is affected by antibiotics, an illness or a change of diet, among other things.

Dr Wade, an Elizabeth Blackwell Institute early-career researcher at Bristol, added: "I was interested to see whether variation in the human gut microbiome, like the number of bacteria or simply the numbers of different types of bacteria, can have an impact on bowel cancer.

"With Mendelian randomisation, we use people’s natural, randomly inherited genetic variations, which alter levels of bacteria within the gut microbiome in a way that mimics a randomised trial, to see whether people with a different genetic makeup, and therefore different gut microbiome profiles, have a different risk of colorectal cancer. In this way, we don’t have to edit anyone’s gut microbiome directly by giving antibiotics or probiotics in a randomised trial or waste time waiting to see whether people within the population get colorectal cancer. We just need studies that have already got this information measured."

The researchers used data from 3,890 people taking part in the Flemish Gut Flora Project, the German Food Chain Plus study and the PopGen study, and 120,328 people in the international Genetics and Epidemiology of Colorectal Cancer Consortium. These studies searched for small variations in the genomes of participants that occur more frequently in people with a particular disease or characteristic than in people without that disease or characteristic – known as genome-wide association studies (GWAS).

They found that genetic variation in the population in particular parts of the genome were linked to the presence or varying amounts of 13 types of gut bacteria, and that people with an unclassified type of bacteria from the Bacteroidales group had a higher risk of bowel cancer compared to people who did not have these bacteria.

Dr Wade, continued: "We found evidence that the presence of an unclassified type of bacteria from a bacterial group called Bacteroidales increased the risk of bowel cancer by between two and 15 per cent.

"This means that, on average, people with this type of bacteria within their gut may have a slightly higher risk of bowel cancer compared to those who don’t. We were able to use Mendelian randomisation to understand the causal role that these bacteria may have on the disease. Our findings support previous studies that have shown that Bacteroidales bacteria are more likely to be present, and in larger quantities, in individuals with bowel cancer compared to those without the disease."

Dr Wade said that her findings need to be replicated by other studies using different sets of data and methods before the implications for human health could be fully understood, "We need to classify the exact species or strain of bacteria in the Bacteroidales group, and we need to do more work to understand how and why human genetic variation can alter the gut microbiome. Even if these results show that these bacteria may cause bowel cancer, we don’t know whether trying to alter them in an effort to reduce the risk of bowel cancer might have other, unforeseen effects on other aspects of health. However, I believe that we are at the forefront of understanding and appreciating the complexity of these relationships – not only those between the human gut microbiome and disease but also between human genetic variation and the gut microbiome itself – which is required to appropriately use these methods to appraise causality," she concluded.

Professor Ian Tomlinson, incoming Director of the Cancer Research UK Edinburgh Centre, University of Edinburgh, UK, is a member of the NCRI conference scientific committee and was not involved in the study.

He said: "Mendelian randomisation methods are increasingly being used routinely to provide indications of causal risk factors by analysing genetic associations with a disease and with risk factors. This is the one of the first studies to use the methods to provide insights into the reasons for the postulated and plausible – but largely unproven – links between the microbiome and bowel cancer.

"The stability of the gut microbiome is in question and there are complex relationships between the types and numbers of bacteria present, and it is therefore too early to ascribe causality to the findings reported. Nevertheless, similar larger studies have the potential for greatly improving our understanding of how bowel cancer develops."

About the NCRI Cancer Conference
The NCRI Cancer Conference is the UK’s largest forum showcasing the latest advances in cancer research. The Conference provides a platform for researchers, clinicians, people affected by cancer and industry representatives to come together to discuss, present and showcase high-quality research. Informative and interactive educational sessions attract about 1,500 delegates each year and create the ideal setting to establish new collaborations with key stakeholders in cancer research.

The NCRI Cancer Conference is taking place from 3-5 November 2019 at the Scottish Event Campus, Glasgow, UK.

NCRI works to coordinate research related to cancer, to improve the quality and relevance of research and to accelerate translation of research into clinical practice for the benefit of patients.