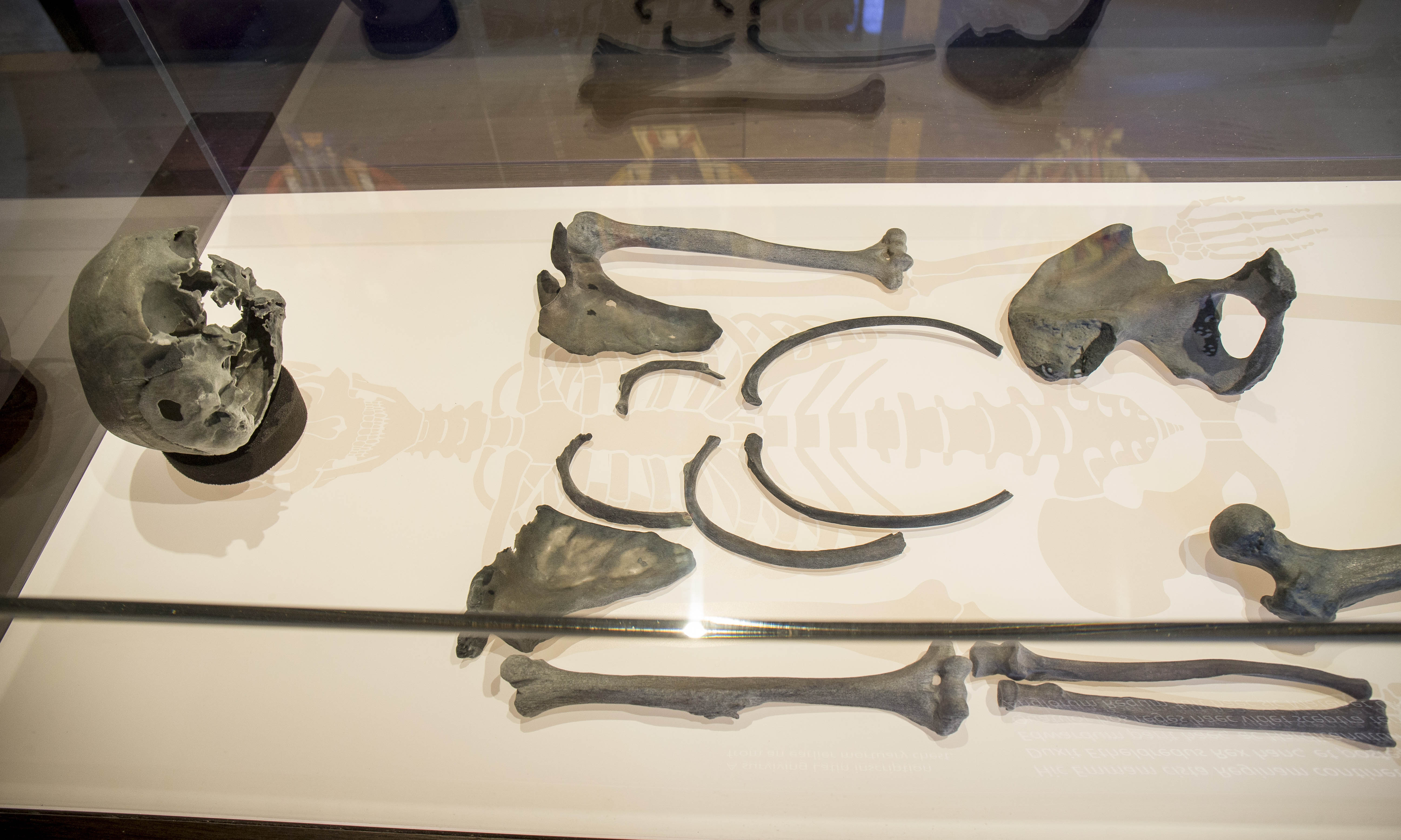 A team of archaeologists and anthropologists from the University of Bristol have been gradually unlocking the secrets hidden within Winchester Cathedral’s mortuary chests as part of an on-going research project supported by the Dean and Chapter of Winchester Cathedral.

It has long been believed that the six mortuary chests contain the mortal remains of pre-Conquest kings and bishops, but for many years this has merely been the subject of speculation. The bones had been co-mingled over the centuries and it was clear that the chests did not contain whole skeletons.

The conservation of the mortuary chests, which began in 2012, provided an opportunity for the scientific analysis of the contents for the first time.

from the University of Bristol’s Department of Anthropology and Archaeology have been working on the project for the past seven years, studying the contents and history of the chests to assess the likelihood of whether the human remains in the chests relate to the historical burial records. In 2015 a collaboration with the Radiocarbon Accelerator Unit at the University of Oxford revealed that the bones were from the late Anglo-Saxon and early Norman period, and these findings confirmed that the bones date from the same periods as the names on the chests, which include eight kings, two bishops and one queen, rather than being the result of later activity within the Cathedral.

The forensic project led by Professor Robson Browno; involves recording the contents of the chests and determining the number of individuals represented, along with their sex, age at death and physical characteristics. Whilst still on-going, this project has already unearthed some fascinating and surprising results.

Working in the Lady Chapel at Winchester Cathedral, which became a temporary laboratory, the researchers reassembled over 1,300 human bones, with the aim of restoring the identity of the kings, one queen, and several bishops traditionally thought to be within the chests.

Each bone has been carefully measured and recorded, and at least 23 partial skeletons have been reconstructed, a remarkable finding in itself since it was originally believed that the mortuary chests contained the remains of no more than fifteen people.

The results of the radiocarbon dating were calibrated by estimating the ‘marine reservoir’ effect for each sample, since high status individuals ate large quantities of fish from the rivers and the sea which contain older radiocarbon.

The ability to identify the sex, age and physical characteristics of these individuals has resulted in some exciting discoveries, including the remains of a mature female dispersed within several chests.

It is not yet certain, but these bodily remains could be those of Queen Emma, daughter of Richard I, Duke of Normandy, the wife of two successive Kings of England, Ethelred and Cnut, and the mother of King Edward the Confessor and King Hardacnut. She was a powerful political figure in late Saxon England, and her family ties provided William the Conqueror with a measure of justification for his claim to the English throne.

Completely unexpected was the discovery of two juvenile skeletons, adolescent boys who had died between the ages of 10 to 15 years in the mid-11th to late 12th-century. Their presence in the chests was not recorded and their identity is still unknown, but they were almost certainly of royal blood.

The University of Bristol’s Professor Kate Robson Brown led the investigation. She said: "It has been a privilege to undertake the forensic analysis of this skeletal collection, and we are excited to be part of the project analysing and identifying the remains of the early monarchs and other high-status Anglo-Saxon individuals. The project is ongoing, and the exhibition in Winchester Cathedral opening on 21 May is unique opportunity to share the scientific process and our findings with the public."

The continuing research is deepening our understanding of the early Anglo-Saxon kings and queens of England, and visitors can find out more about the project from 21 May when Winchester Cathedral launches its landmark National Lottery Funded exhibition Kings and Scribes: The Birth of a Nation. The Bristol team has co-produced the display of forensic science within the exhibition; bones of the female skeleton have been 3D printed and laid out as a key exhibit in the exhibition, and a facial reconstruction of one of the boys is also on display.

More exciting developments will be revealed over time as the investigation to identify the individuals in the chests continues. These discoveries could place Winchester Cathedral at the birth of our nation and establish it as the first formal royal mausoleum.

About the mortuary chests

Winchester Cathedral has six mortuary chests, painted wooden caskets which are displayed high on stone screen walls either the side of the high altar area. These mortuary chests are the last in a series of similar arrangements for the safekeeping of the remains of many important kings and bishops who were originally buried in the Anglo-Saxon cathedral known as Old Minster, north of the present cathedral. The mortuary chests are believed to contain the pre-Conquest remains of kings and bishops, but it had long been known that the bones were jumbled rather than individual skeletons. Part of this confusion goes back to 1158 when a first group of royal and episcopal remains, reburied for a time after the demolition of Old Minster in 1093–4, were put into lead caskets near the high altar. A contemporary chronicler noted that ‘kings were mixed with bishops, and bishops with kings’. A second group of royal bones, which had been reburied with greater care in the choir of the Norman cathedral, were later put into individual chests, but they seem to have been particular targets for the Roundhead soldiers who ransacked the cathedral in 1642 at the start of the English Civil War, so further mixing of the bones took place. Although the chests bear inscriptions stating who was supposed to be within them, it was clear they bore no relation to the actual contents—and the names of other individuals also said to be in the chests are known only from antiquarian writings.

The earliest recorded names are Cynegils, the first Christian king of Wessex (died c.641), and Bishop Wini, first bishop of Winchester; the latest include King William Rufus, famously killed in the New Forest in 1100. So, the C14 results seem to confirm the authenticity of the bones. Other famous individuals thought to be in the chests are King Ecgberht and his son Ethelwulf, father of Alfred the Great, and Archbishop Stigand who appears on the Bayeux Tapestry.

About the research project

The research project to conserve the mortuary chests and analyse their contents began in 2012, supported by the Dean and Chapter of Winchester Cathedral, with the permission of APABE (Advisory Panel on the Archaeology of Burials in England). The project has involved a team of biological anthropologists, archaeologists and historians including Professor Kate Robson Brown, Dr Heidi Dawson-Hobbis and Professor Mark Horton (archaeology and biological anthropology), Professor Tom Higham and Dr Tim Knowles (radiocarbon dating), Dr John Crook, Professor Barbara Yorke and Professor Martin Biddle (historical and archaeological research), Paul Lewis (scanning and 3D printing) and Richard Neave (facial reconstruction).

About Kings and Scribes: The Birth of a Nation

Kings and Scribes: The Birth of a Nation is the culmination of an eight-year development project which seeks to unlock Winchester Cathedral’s stories and treasures by inspiring active engagement in the interpretation and exploration of the Cathedral’s heritage.

The project has encompassed the repair and conservation of the presbytery roof, high vaults and roof bosses and 15th-century stained glass; the redevelopment of the Triforium Gallery as a new exhibition space; and a learning and participation project to encourage audience engagement with three key and interconnected stories: A Scribe’s Tale, Decoding the Stones, and The Birth of a Nation.

Since 2012, the presbytery roof has been re-leaded and the presbytery high vault and 15th century stained glass have been restored to their former glory. The construction of the Wessex Learning Centre and the refurbishment of the Education Centre has greatly enhanced the quality of the Cathedral’s education and outreach programme to over 25,000 children annually from Hampshire and beyond, as well as enabling all-age learning. Finally, the South Transept has been transformed into a fully accessible state-of-the-art exhibition experience over three levels, with greater physical access to the Mezzanine and Triforium floors via a new glass lift. The new and innovative exhibitions will re-energise the interpretation of Winchester Cathedral’s story and collections, with interactive displays and hands-on learning opportunities.

Kings and Scribes: The Birth of a Nation will play a vital role in building a more sustainable future for the Cathedral. The need for conservation and capital works has created the opportunity for a paradigm shift within the organisation and the physical transformation of the South Transept, which in turn will facilitate learning and positive participation. The new exhibitions will enrich the Cathedral’s existing visitor offer, providing an exceptional visitor experience, and the resulting increase in visitor numbers will ultimately secure Winchester Cathedral’s financial sustainability.

Kings and Scribes: The Birth of a Nation was made possible by a grant of £11.2 million from The National Lottery Heritage Fund and donations from other generous supporters.

Winchester Cathedral is one of the nation’s greatest treasures and takes its place alongside outstanding examples of European architectural and historic heritage. It is one of the largest and finest medieval Cathedrals in the world, with the longest Nave of any Gothic Cathedral in Europe.

The Cathedral resonates with the history and identity of the English nation and contains significant works of art, including the richly illuminated 12th-century Winchester Bible. It is famous as the resting place of Anglo-Saxon kings and bishops and the much-loved author Jane Austen.

Located at the heart of historic Winchester, once the seat of Anglo-Saxon and Norman power, Winchester Cathedral stands on the site of an early Christian church, Old Minster. This Anglo-Saxon Church became the royal chapel of the early kings and queens of England.

Construction of the present day Cathedral began in 1079 and it was consecrated in 1093. Winchester Cathedral remained at the heart of royal life, remodelled over time by wealthy and powerful Norman bishops.

Following the dissolution of England’s monasteries during the 1530s, monastic life at Winchester Cathedral ceased and it became a Church of England Cathedral. Today, the daily rhythm of the Cathedral ensures that it still serves the purpose for which it was built. It has been a living place of welcome, worship and hospitality for over 900 years.