The Lost Heroes of DNA 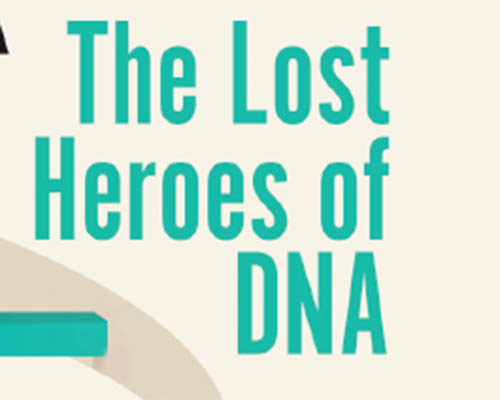 James Watson and Francis Crick discovered DNA but in fact, they clicked into place the last piece of a huge jigsaw puzzle that other researchers had assembled over decades. A free talk tonight [22 May 6 pm to 7.30 pm] by Professor Gareth Williams, Emeritus Professor of Medicine and Dentistry will tell the story of the discovery of DNA, highlighting some of its lost heroes.

Professor Williams will draw on material from his new book to reveal the lost heroes of DNA, namely Friedrich Miescher, Fred Griffith and Oswald Avery and a group of PhD students, who were plunged into darkness when the spotlight fell on James Watson, Francis Crick, Maurice Wilkins and Rosalind Franklin.

Friedrich Miescher, who first isolated ‘nuclein’ (DNA) from the nuclei of pus cells, only to convince himself that it served no important function. He died of tuberculosis – just as sensational reports emerged from America, claiming that nuclein could cure the infection.

Fred Griffith, a reclusive English bacteriologist who worked in a run-down lab near Covent Garden and avoided scientific meetings like the plague. Griffith discovered that genetic material could be transferred artificially between bacteria. He was killed during the Blitz, shortly before this material was shown to be DNA.

Oswald Avery, a charismatic but oddball American expert on lobar pneumonia, an often lethal infection nicknamed ‘The Captain of the Men of Death’. After 15 years of on-off research, Avery proved that genetic material in bacteria is DNA – an idea so heretical that it cost him a Nobel Prize.

A trio of neglected PhD students – Sven Furberg, Michael Creeth and Elwyn Beighton ­– whose work pointed clearly to the Double Helix, several years before Watson and Crick made their discovery. Their findings were ignored because they were too junior and too far ahead of their time; their true importance was only realised decades later.

Discussing and unpacking this story with him will be Sir Mark Walport, FRS, Chief Executive of UK Research and Innovation, and former Chief Scientific Advisor to the Government (2013–17) and Director of the Wellcome Trust (2003—13).

The talk entitled ‘Unravelling the double helix: The Lost Heroes of DNA’ takes place on Wednesday 22 May between 6 to 7.30 pm in the Tyndall Lecture Theatre. To register, please visit the Event Brite website.