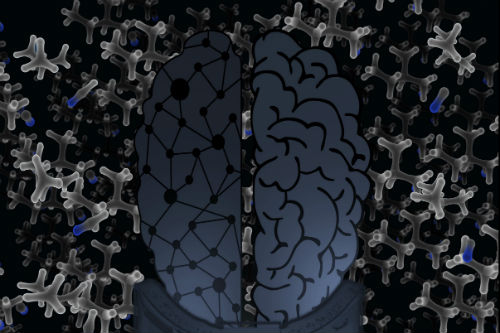 Scientists from the University of Bristol’s Intangible Realities Laboratory (IRL) and ETH Zurich have used virtual reality and artificial intelligence algorithms to learn the details of chemical change.

In a cover article published today in The Journal of Physical Chemistry, researchers across the University of Bristol and ETH Zurich describe how advanced interaction and visualisation frameworks using virtual reality (VR) enable humans to train machine-learning algorithms and accelerate scientific discovery.

The team describe their work designing a state-of-the-art open-source VR software framework which can carry out ‘on-the-fly’ quantum mechanics calculations.

It allows research scientists to explore sophisticated physics models of complex molecular rearrangements which involve the making and breaking of chemical bonds, the first time that virtual reality has been used to enable such a thing.

Lead author Silvia Amabilino, who works between the IRL and Bristol’s Centre for Computational Chemistry, said “Generating datasets to teach quantum chemistry to machines is a longstanding challenge.

Co-author, Dr Lars Bratholm, who works between the IRL, the Centre for Computational Chemistry, and the School of Mathematics added: “For most scientific computational workflows, the bottleneck is processing power. But machine learning has created a scenario where the new bottleneck is the ability to quickly generate high-quality data.”

Royal Society Research fellow Dr David Glowacki, who heads up the IRL across Bristol’s Department of Computer Science and School of Chemistry, said: “Immersive tools like VR provide an efficient means for humans to express high-level scientific and design insight. As far as we know, this work represents the first time that a VR framework has been used to generate data for training a neural network.”

The rise of machine learning and automation across science and society has led to important questions as to the sort of scientific future we should be consciously working to design over the next few decades. Narratives of our emerging future often cast automation as the ultimate end, and it is sometimes unclear where the human fits in.

“The paper offers an interesting vision for how science may evolve in the near future, where humans focus their efforts on how to effectively train machines.”