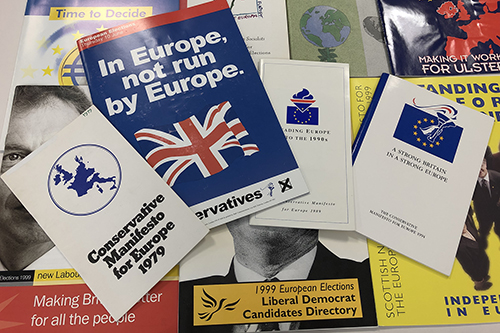 A selection of election leaflets from the various European Parliament elections since 1979 University of Bristol, Special Collections Library 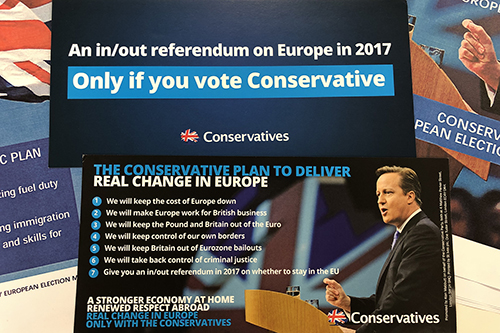 When the first European Parliament elections were held in June 1979, they were hailed as the world’s first international elections. Under Prime Minister Margaret Thatcher, the Conservative Party stated in the opening paragraph of its manifesto that Britain’s future ‘lies unequivocally within the European Community’.

Fast-forward 40 years and Britain faces a very different political picture ahead of the EU elections on 23 May, just months before Brexit. This fascinating shift in political views and campaigning is captured in the UK's largest and oldest-established collection of election literature held at the University of Bristol.

As political parties old and new, along with independent candidates, begin to send election addresses, manifestos, and related publicity, the University's Special Collections Library is urging the electorate not to throw away any material, but to collect them and help capture this historic vote.

It would like members of the public to send in material from all political parties and independent candidates, from all constituencies in England, Wales, Scotland and Northern Ireland to ensure all sides of the political spectrum are represented.

The extensive archive holds over 30,000 election addresses from every British general election since 1892.

The treasure trove of political propaganda helps researchers get a clear picture of how the European Parliament elections were fought, capturing which issues were of interest to the electorate and candidates.

The UK became a fully-fledged member of the European Economic Community (as it then was) on 1 January 1973 – a move which proved controversial at the time, prompting a referendum on whether the UK should remain part of the Community.

After a 67 per cent vote in favour of continued membership, the British public then voted in the first European Parliament elections in 1979 alongside the other eight member states.

In 1979, the Conservative Party said it would be 'absurd' for Britain to threaten to break up the EU 'simply because it dislikes some particular policy'.

Labour were more sceptical about the EU in 1984, with its manifesto claiming 'membership has helped to speed up our economic decline' and pledging that its MEPs would 'fight for the people of Britain'.

However, by 1994, Labour described stated that leaving the EU would 'isolate ourselves from our biggest market, with all the further job losses that would bring'. To do so would 'cut Britain off from mainstream international affairs where our voice is so urgently needed'.

Ten years on and the debate about being in the EU still rages on. Conservative Party leaflets highlight then Prime Minster David Cameron's promise to hold an in/out referendum on Europe if people voted for the Conservatives in 2014. They promised 'a stronger economy at home' and 'renewed respect abroad'.

The archive also gives an insight into the public's perceptions on Europe. An article in The Independent on 13 June 1994, written by Steve Blame, managing editor and presenter of MTV News said: "Euroconsciousness is high among the under 30s and has a definite cut-off age. Older people are more interested in domestic issues. In this way, Europe acts like a new musical genre, appealing to the young and alienating the old."

"This upcoming election is particularly significant as it comes at a time of strong sentiment towards the EU, with new parties emerging and huge uncertainty around Britain's future relationship with Europe.

"We would ask people in all 12 constituencies in the UK to send materials from all political parties to us.  This material will help academics, students, members of the public, politicians, and others find out what was discussed now in the future."

Please send election addresses, manifestos, and related publicity from any constituency and party (ideally in one batch) to:

Further information is available on the Special Collections blog.