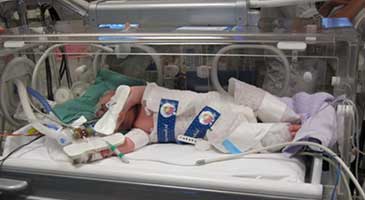 A University of Bristol researcher who discovered that cooling babies who have suffered a lack of oxygen at birth improves their survival without brain damage in later childhood, is named by Universities UK as one of the ‘Nation’s Lifesavers’.

One in 1,000 babies born at full term in the UK suffer brain injury as a result of being severely deprived of oxygen. In the past, 70 per cent either died, or survived with cerebral palsy and or learning disabilities.

Professor Marianne Thoresen, Professor of Neonatal Neuroscience at Bristol Medical School wanted to see if there was a way to prevent damage caused by lack of oxygen. She studied cooling techniques in piglets paving the way for clinical trials which showed that cooling reduced injury in many (but not all) affected children and challenged the centuries-old practice of keeping sick babies warm.

The treatment is recommended by the National Institute of Clinical Excellence, the health watchdog, and the International Liaison Committee on Resuscitation, and since 2010, cooling has become the recommended way to treat lack of oxygen at birth throughout the developed world. This approach already saves 1,500 babies from death and disability each year.

Professor Thoresen’s research has been named by Universities UK as one of the top 100 individuals or groups based in universities whose work is battling diseases, tackling inequality, helping new parents and children enjoy the best start in life and supporting older people. It also highlights the advances being pioneered at universities and how their work stretches far beyond the educational and economic impact they provide.

Professor Thoresen, said: “I am delighted to have my research recognised as one of the ’Nations Lifesavers’. This also highlights the pioneering work being carried out by many researchers that is helping make a positive difference to thousands of lives across the world.”

Professor Dame Janet Beer, President of Universities UK, said: “When people think of lifesavers they understandably tend to focus on the dedication and skill of our doctors, nurses, carers, and paramedics – many of whom are trained at universities. Every day, up and down the country, universities are also working on innovations to transform and save lives. Research taking place in universities is finding solutions to so many of the health and wellbeing issues we care about and the causes that matter.

“By proudly working in partnership with charities, the NHS and healthcare organisations, universities are responsible for some of our biggest health breakthroughs and in revolutionising the delivery of care.

“This campaign is a chance to bring to life the wonderful and often unexpected work going on every day in our universities and to celebrate some of the people working to make a life-changing difference to us all.”

Campaign ambassador Dame Katherine Grainger, Chancellor of Oxford Brookes University, Chair of UK Sport and Britain’s most decorated female Olympic athlete, commented: “MadeAtUni Lifesavers celebrates the researchers and their teams in universities across the country who are providing innovations, breakthroughs, cures and treatments to improve the health and wellbeing of adults and children, locally, nationally and internationally.

“I know from my own direct experience at Oxford Brookes that our universities are treasuries in which to share knowledge, test established notions and evidence about health, and ultimately create fresh approaches which can help us all to thrive.”

Research, carried out by Britain Thinks, shows the public are proud of UK universities but have little understanding of the benefits they bring, with most not being aware that UK academics are behind many of the discoveries that save lives and keep up healthy.

More information on the campaign can be found on the dedicated website.

1. About the Britain Thinks research: Britain Thinks polled 2,063 UK adults online between 30 May and 31 May 2018. Data was weighted to be representative of all UK adults.

2. Universities UK is the collective voice of 136 universities in England, Scotland, Wales and Northern Ireland. Its mission is to create the conditions for UK universities to be the best in the world; maximising their positive impact locally, nationally and globally. Universities UK acts on behalf of universities, represented by their heads of institution. Visit: www.universitiesuk.ac.uk