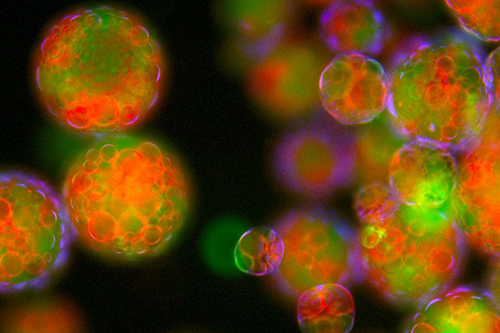 The University of Bristol and Max Planck Society will be presenting their new ground-breaking research collaboration at the BUILA/DAIA Showcase at the British Embassy in Berlin today [Tuesday 14 May].

UK and German universities have joined forces to host an innovative Showcase to shine a spotlight on the deep and vital scientific, creative and cultural partnerships that exist between British and German academia.

The Showcase will explore themes contributing to European priorities where partners are collaborating at the cutting edge of science and technology and education, in areas such as AI, sustainable product design, and health research.  Bristol and Max Planck Society's new partnership is one such example.

Building stripped-down versions of life using protocells, genome delivery systems and synthetic cytoskeletons comprise some of the ground-breaking research due to take place at a new Centre at the University of Bristol. The Max Planck-Bristol Centre for Minimal Biology, a partnership between the University of Bristol and the Max Planck Society for the Advancement of Science (MPG) in Germany, aims to advance the future of health and medicine by understanding the fundamental nature of life.

Minimal biology is a new emerging field at the interface between the physical and life sciences. It aims to design and build artificial cells, minimal genomes, virus-like nanodevices and new cellular scaffolds, and seeks to understand the foundations of life and how it arose from non-living matter.

The Centre will be based in the School of Chemistry at the University of Bristol. A paramount objective is to train early career scientists in minimal biology and biodesign.

Professor Hugh Brady, Vice-Chancellor and President of the University of Bristol, said: "The establishment of this internationally recognised centre of excellence in this exciting and fast-emerging scientific field is testament to the expertise at Bristol and our German partners. The work of this Centre has the potential to provide the breakthrough knowledge needed to address some of the most complex challenges in fundamental science."

Professor Martin Stratmann, President of the Max Planck Society, added: "Joining forces is the only path to success in this vast research field. In the same vein that the human brain can't be understood as one single scientific challenge to be solved by one single research group at one certain point in time – in the same vein the construction of artificial bio-functions is likewise a maximally diverse field of research. We do not deal with a certain question but rather with platform technologies, with a toolbox that will allow us to start a totally new way of doing science."

Professor Joachim Spatz said: "We will strive to answer the question of what the defining principles of life are and how they may be partly engineered de novo by intelligent design. These are among the foremost questions of our time."

What is Minimal Biology
Minimal biology is an emerging research field at the interface between the physical and life sciences.  It applies principles and methods from the former to construct new systems that mimic or augment living cells and organs.

This is delivered through multidisciplinary research which brings together postgraduate and postdoctoral researchers, academics, policy makers and industry, whilst also engaging the public with emerging solutions to global challenges.

The School of Chemistry offers a number of postgraduate courses and a range of undergraduate degrees.