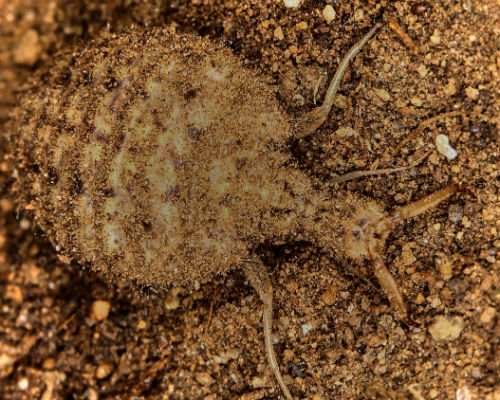 A team of biologists and physicists, led by the University of Bristol, have uncovered new insights into how antlions – one of the fiercest and most terrifying predators in the insect kingdom – build their deadly pit traps.

Antlions – with their nightmarish fish-hook sharp jaws which can drain the bodily fluids of its victims within minutes – are iconic within entomology and they have been studied for 200 years.

It was known that they make pits lined with fine sand grains and that they throw large debris out of the pit.

But during their field work, the researchers were amazed at how thorough this is – so much so that even slightly larger sand grains are ejected.

They performed an experiment in which they gave antlions a mixture of large and small sand grains and captured and separated all of the grains thrown out of the pit.

Vastly more large sand grains were thrown out than would ever have occurred in the volume of sand that could have occupied the space that became the pit.

Professor Nigel Franks from the University of Bristol’s School of Biological Sciences, said: “It is almost like a conjuring trick – many more large grains are ejected than seems possible.

“One answer is that the antlion is “interrogating” much more sand to find and eject large grains than just the volume of sand that has to be removed to form the final pit.”

How this is achieved lies in some physical processes that were only discovered a couple of decades ago.

The research team consulted physicists Kim Christensen and Max Falkenberg at Imperial College, London, who have unrivalled expertise when it comes to the strange properties of granular mixtures.

Together they formulated a computational model, mimicking an antlion digging in granular mixtures, to gain insight into the processes and the reasons why they employ spiral digging.

Professor Franks added: “This technique is a superbly efficient time-saving method that literally enables antlions to plough through a large volume of sand such that the small avalanches they create cause large sand grains differentially to cascade to the bottom of the construction trench where they can be preferentially ejected during pit construction.”

Most animal traps use silk as in spider webs. But spider silk is secreted whereas antlions only use materials they find in their environment.

Nevertheless, spider webs and antlion pits are both superb examples of extended phenotypes.

They can be seen as an extension of their builder’s body optimised by natural selection. What this research has shown is that extended phenotypes produced purely from found materials can be not only efficiently constructed but extremely efficient in operation.

By lining their pits with fine slippery sand grains, the antlions make their pits extremely avalanche-prone.

Professor Franks added: “Any prey item that ventures into the pit will ride an avalanche down to the deadly antlion at the bottom of the pit. Such pits are an intriguing example of the ever-present force of natural selection that shapes biology.”

‘Digging the Optimum Pit: Antlions, Spirals and Spontaneous Stratification’ by Nigel R. Franks, Alan Worley, Max Falkenberg, Ana B. Sendova-Franks and Kim Christensen in Proceedings of the Royal Society B