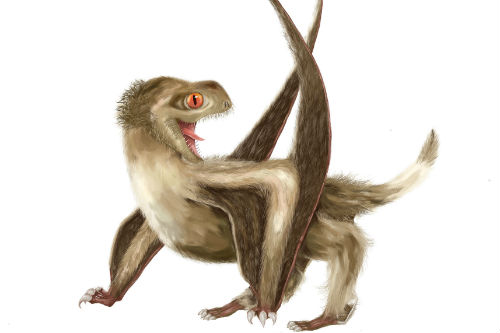 Reconstruction of the studied pterosaur, with four different feather types over its head, neck, body, and wings, and a generally ginger-brown colour. Reconstruction by Yuan Zhang. 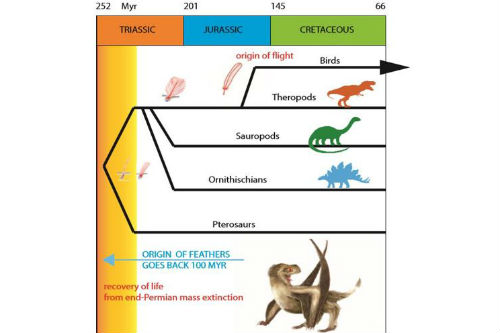 Timing of the origin of feathers shifts back from the origin of birds, 150 million year ago, to the Early Triassic, 250 million years ago. Feathers were initially for insulation at a time of quickening life processes. Pterosaur reconstruction by Yuan Zhang (Nanjing).

New research, led by the University of Bristol, suggests that feathers arose 100 million years before birds - changing how we look at dinosaurs, birds, and pterosaurs, the flying reptiles.

It also changes our understanding of feathers themselves, their functions and their role in some of the largest events in evolution.

The key discovery came earlier in 2019, when feathers were reported in pterosaurs – if the pterosaurs really carried feathers, then it means these structures arose deep in the evolutionary tree, much deeper than at the point when birds originated.

Lead author, Professor Mike Benton, from the University of Bristol’s School of Earth Sciences, said: “The oldest bird is still Archaeopteryx first found in the Late Jurassic of southern Germany in 1861, although some species from China are a little older.

“Those fossils all show a diversity of feathers – down feathers over the body and long, vaned feathers on the wings. But, since 1994, palaeontologists have been contending with the perturbing discovery, based on hundreds of amazing specimens from China, that many dinosaurs also had feathers.”

Co-author, Baoyu Jiang from the University of Nanjing, added: “At first, the dinosaurs with feathers were close to the origin of birds in the evolutionary tree.

“This was not so hard to believe. So, the origin of feathers was pushed back at least to the origin of those bird-like dinosaurs, maybe 200 million years ago.”

Dr Maria McNamara, co-author from University College Cork, said: “Then, we had the good fortune to work on a new dinosaur from Russia, Kulindadromeus.

“This dinosaur showed amazingly well-preserved skin covered with scales on the legs and tail, and strange whiskery feathers all over its body.

“What surprised people was that this was a dinosaur that was as far from birds in the evolutionary tree as could be imagined. Perhaps feathers were present in the very first dinosaurs.”

Danielle Dhouailly from the University of Grenoble, also a co-author, works on the development of feathers in baby birds, especially their genomic control. She said: “Modern birds like chickens often have scales on their legs or necks, and we showed these were reversals: what had once been feathers had reversed to be scales.

“In fact, we have shown that the same genome regulatory network drives the development of reptile scales, bird feathers, and mammal hairs. Feathers could have evolved very early.”

Baoyu Jiang continued: “The breakthrough came when we were studying two new pterosaurs from China.

“We saw that many of their whiskers were branched. We expected single strands – monofilaments – but what we saw were tufts and down feathers. Pterosaurs had feathers.”

Professor Benton added: “This drives the origin of feathers back to 250 million years ago at least.

“The point of origin of pterosaurs, dinosaurs and their relatives. The Early Triassic world then was recovering from the most devastating mass extinction ever, and life on land had come back from near-total wipe-out.

“Palaeontologists had already noted that the new reptiles walked upright instead of sprawling, that their bone structure suggested fast growth and maybe even warm-bloodedness, and the mammal ancestors probably had hair by then.

“So, the dinosaurs, pterosaurs and their ancestors had feathers too. Feathers then probably arose to aid this speeding up of physiology and ecology, purely for insulation. The other functions of feathers, for display and of course for flight, came much later.”

‘The Early Origin of Feathers’ by M. J. Benton, D. Dhouailly, B. Jiang and M. McNamara in Trends in Ecology & Evolution