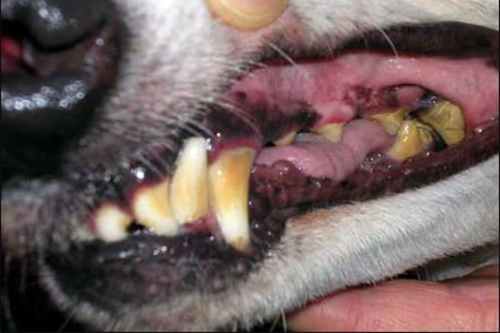 Dental disease is the most common health issue facing pet greyhounds, according to the largest ever study of greyhounds treated in first opinion veterinary clinics. The research, led by the Royal Veterinary College's (RVC) VetCompassTM programme in collaboration with the University of Bristol Vet School, reveals that 39 per cent of greyhounds suffer from dental problems, which is a far higher percentage than for any other dog breed.

Greyhounds in the UK are typically used for racing during their early lives, with an increasing number rehomed as pets after their racing careers are over. The results of this study, which is published in Canine Genetics and Epidemiology, adds significantly to evidence available for the debate on the welfare issues surrounding greyhound racing. It will also help breeders and regulators to prioritise activities to mitigate the worst of the harm to greyhounds from their racing careers, as well as help greyhound rehoming organisations advise adopters on optimal preventative care options.

Dr Dan O'Neill, Veterinary Epidemiologist and VetCompassTM researcher at the RVC, who was the main author of the paper, said: "Pet greyhounds are now a common breed treated in general veterinary practices in the UK. Retired racing greyhounds can make very good pets, but these results sadly show that they also carry health legacies from inherent breed predispositions as well as impacts from their prior racing careers. These potential problems include bad teeth, behavioural issues and arthritis. Our new VetCompass evidence especially reveals a worryingly high level of dental disease. This awareness should encourage all those who care for the greyhound to prioritise preventive and remedial strategies for these issues and therefore to  improve the welfare of this lovely breed, both before and after rehoming as pets."

Dr Nicola Rooney, co-author and lead researcher on Greyhound Welfare Project at the Bristol Veterinary School, added: "Greyhounds can make fantastic pets and live long healthy lives, but it has long been suspected that they are particularly prone to dental problems which can negatively impact upon their quality of life. Here we have the first evidence that levels of dental issues are higher in greyhounds than in other breeds. This highlights the importance of conducting research into ways of improving dental health.

"At Bristol we have been conducting a three-year research programme to further understand what causes dental problems in greyhounds and methods to avoid them. Combined with the current RVC study, this is an important step to understanding and improving the future welfare of greyhounds."

Professor Steve Dean, Chairman of the Kennel Club Charitable Trust (KCCT), explained: "I must declare an interest in this study as my additional role as Chairman of the Greyhound Trust reveals my enthusiasm for this lovely breed. It will come as no surprise to those who love greyhounds that dental plaque is a significant condition in this breed. This latest study from the VetCompass initiative reveals the extent of the problem and should stimulate interest in further work to understand why periodontal disease is such an issue for both the racing dog and the retired greyhound. Effective research could also have a far reaching impact for several other breeds that suffer a similar challenge. The VetCompass programme has been helpful in revealing breed specific problems and this study is yet another informative analysis   of extensive clinical data. The Kennel Club Charitable Trust regards the financial support it provides as a successful investment in clinical research."

About VetCompass
The RVC'sVetCompass™ project analyses de-identified veterinary clinical records from over 1,500 UK vet clinics and has published over 50 papers that generate and share evidence that can improve the health and welfare of all companion animals.