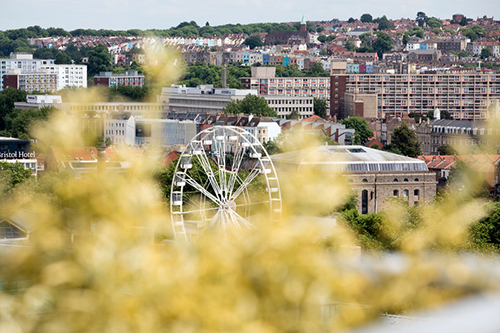 A unique new project led by the University of Bristol has received a £960,000 boost to improve integration across Bristol by exploring how its citizens and communities share spaces and move around the city.

University researchers on the 'Everyday Integration' project, funded by the Economic and Social Research Council (ESRC), will work with Bristol City Council and 29 community partners to identify existing best-practice and better understand how to overcome the various barriers people currently face.

Bristol - known as a city of villages - suffers from a variety of spatial, social, cultural, civic, and economic divisions which often lead to poor integration and inequality.

Rather than just focusing on how immigrants and different ethnic minorities integrate, the project takes a much wider view and doesn’t single out any one population.

Researchers will look specifically at how people move around the city and share spaces; their experiences of precarious work and consequences for integration; where and how citizens engage with decision-making forums; and how Bristolians learn about and interact with people from different backgrounds, communities and lifestyles.

Public transport links have already been identified as a barrier to integration, with journey times from Lawrence Weston to the city centre taking over an hour due to the bus route heading north to Avonmouth before circling back to the city centre.

Part of the research will include flash focus groups with people on buses and collecting data via GPS logs to show how people move across the city. There will also be interviews with Uber drivers to understand the impact of precarious labour.

Starting on 1 October, the two-year project is the first its kind in the UK and will ultimately lead to a co-produced 'Integration Strategy' for Bristol and an 'Integration Toolkit' which can be used by cities across the UK.

Professor Jon Fox, from the University of Bristol's School of Sociology, Politics and International Studies, is leading the project.

He said: "We view integration as a process involving everyone, not just immigrants and ethnic minorities. Integration is about making it possible for everyone to come together.

"This project is an attempt to shift debate on integration from its top-down immigrant focus to a more inclusive local bottom-up approach – one which brings people together in the routine contexts of their everyday lives.

"Bristol is an ideal place to look at how integration works or doesn’t work for its residents. Its ethnically diverse population contributes to its civic, political, economic and cultural life.

"We hope to learn more about existing best practice, as well as the barriers faced by some of its citizens, in order to ultimately establish a strategy to improve integration in Bristol and other cities across the UK."

Marvin Rees, Mayor of Bristol, said: "We all know that Bristol is an amazing place to live, but also a city that struggles with inequality and division. Bridging those divides is at the heart of our One City approach.

"So I am delighted that, following two years of work with the University of Bristol and partners across the city on how best to tackle integration, this project will take an innovative approach to how integration works in Bristol.

"By completely rethinking integration and looking at it through the lens of routine interaction and exchange in everyone’s everyday life– rather than just focusing on immigrants or minorities – we can develop a different approach to integration which gets to the heart of our challenges and helps us take practical steps towards our vision of Bristol as a city of hope where nobody is left behind."

The University of Bristol will be working with the Mayor's Office at Bristol City Council, four core city partners (Ashley Community Housing, Black South West Network, Up Our Street and Voscur), as well as a wider group of 25 community partners.

About the Economic and Social Research Council (ESRC)

The Economic and Social Research Council (ESRC) is part of UK Research and Innovation, a non-departmental public body funded by a grant-in-aid from the UK government.

The ESRC is the UK's largest funder of research on the social and economic questions facing us today. It supports the development and training of the UK’s future social scientists and also funds major studies that provide the infrastructure for research. ESRC-funded research informs policymakers and practitioners and helps make businesses, voluntary bodies and other organisations more effective.