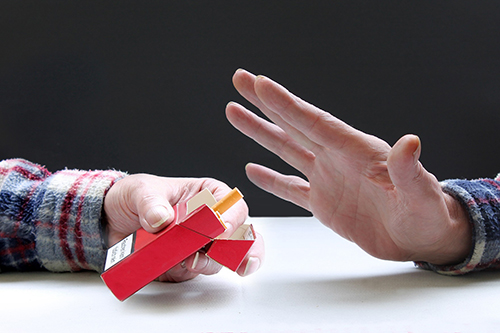 A new study from researchers at the universities of Bristol and Bath suggests that doctors should rethink which drugs they prescribe to help smokers with mental health conditions kick the habit.

Their results highlight that the most effective drug at helping individuals to stop smoking is less likely to be prescribed to people with mental health conditions.

People with mental health conditions, such as anxiety or depression, are twice as likely to smoke compared to the general population. They tend to smoke more cigarettes per day, be more heavily addicted, and more likely to relapse when they try to quit. And whereas smoking rates in the UK have declined over recent decades, smoking rates have changed relatively little for people with mental health conditions.

Most smokers wishing to quit are prescribed one of two common smoking cessation drugs: nicotine replacement therapy (NRT) or varenicline. Recent randomised trials and observational studies have found that patients prescribed varenicline are more likely to stop smoking compared to those prescribed NRT.

But there have been concerns around the psychological safety of varenicline, with doctors reluctant to prescribe the drug to smokers with mental health conditions. In fact, the best evidence shows that varenicline is not associated with worse mental health outcomes.

The new study, published today [Wednesday 10 July] in the journal Nicotine & Tobacco Research, compares rates by which patients prescribed NRT* and varenicline** succeed in giving up, and what effects the drugs have on individual's mental health.

Drawing on data from over 200,000 smokers, it compares outcomes for patients with and without mental health conditions prescribed both types of drug. The results highlight that:

Dr Gemma Taylor from the University of Bath's Addiction & Mental Health Group with the Department of Psychology, who led the study, explained: "Smoking is still the world's leading cause of preventable illness and death. One in every two smokers will die because of their addiction unless they quit. Yet, whilst smoking rates have declined over recent decades for the general population, prevalence has not shifted to the same extent in people with mental health conditions who disproportionately suffer from smoking related mortality and morbidity and lower life expectancy.

"This study is about addressing this public health challenge to see whether assumptions about prescriptions could be challenged to give patients wishing to quit a better chance of success. Our results, in combination with results from clinical trials, suggest that doctors should rethink prescription practice in view of the benefits varenicline could bring to help those with mental health conditions stop smoking. Stopping smoking has clear physical health benefits, and there is growing evidence that stopping smoking is associated with better mental health too, benefits that could be as large as taking anti-depressants."

The research team conducted the study using electronic medical records from 654 general practices in England from 2006-15 via the Clinical Practice Research Database.

Comparing patients' success in quitting smoking using either NRT or varenicline, they focused on rates by which patients with mental health conditions gave up at three, six and nine month windows, as well at one, two and four years after first prescription.

The team also observed that across all patients, NRT and varenicline prescribing declined overtime. This could be because NHS Stop Smoking Services are being decommissioned from primary care.

Ann McNeill, Professor of Tobacco Addiction at King's College London and co-Chair of the Mental Health and Smoking Partnership, said: "People with mental health conditions are more likely to smoke and smoke heavily than those without, and this contributes to them dying much earlier. Doctors should therefore be pulling out all the stops to help these smokers to quit, but this research involving nearly 200,000 smokers, shows that this is not happening.

"Smokers with mental conditions are less likely to be prescribed varenicline than nicotine replacement therapy, despite the authors finding varenicline to be more effective and generally associated with better mental health outcomes."

The 2019 ASH report 'A Changing Landscape: Stop Smoking Services and Tobacco Control in England' suggests that in some parts of the country, people are being refused varenicline from GP surgeries. There is also preliminary evidence of this occurring in a related study being run by University of Bath's Addiction & Mental Health Group, in which trial participants have been declined varenicline by their GP surgery and informed to seek varenicline elsewhere.

This research was approved by the Independent Scientific Advisory Committee and funded by Global Research Awards for Nicotine Dependence (GRAND), an independently reviewed competitive grants programme supported by Pfizer.

The first author's salary was funded by the National Institute for Health Research (NIHR) Health Technology Assessment (HTA) programme [project number 14/49/94] during the conduct of this research. The funders had no role in study design, data collection, and analysis, decision to publish, or preparation of the article.