When the moon came to Bristol 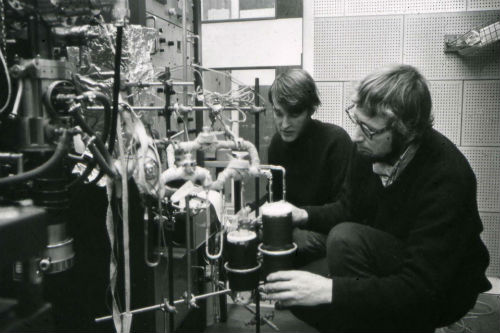 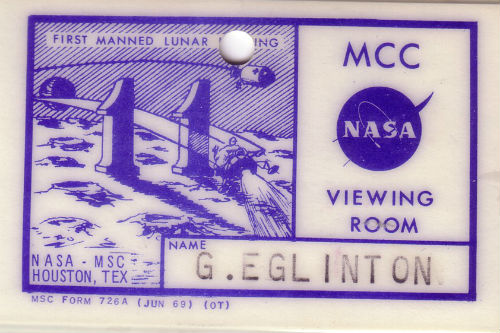 Official name badge for Geoff Eglinton, allowing him to view the Apollo 11 mission

The Apollo 11 mission landed on the Moon on July 20, 1969, enabling the first man to walk on its surface the next day - 21 July. The mission returned to Earth a few days later, bringing back safely the astronauts and a precious load of lunar rocks.

On 23 October, some of these lunar samples arrived in Bristol, to be analysed at the University of Bristol by the Organic Geochemistry Unit (OGU) then led by Professor Geoff Eglinton.

Geoff and his team’s goals were to look for methane formed from solar wind bombardment, which they found, providing new insights into abiotic organic chemistry in the solar system.

They also sought biomarkers, simple molecules that can be directly traced to biological precursors and would have therefore been evidence for life on the Moon.  Of course – and as expected - they found none.

However, the methods they developed to make these discoveries were transformative, helped to found the discipline of organic geochemistry and launched the Organic Geochemistry Unit, which still thrives today.

“In the 70s and 80s, they were used to characterise and discover petroleum deposits; subsequently, they were used to reconstruct ancient climate change and helped build the case that carbon dioxide causes significant global warming.

“I’ve used them to study the advent of agricultural practices including dairying and the fate of carbon and nitrogen in soils and rivers.”

Among those who were part of the team were James Maxwell FRS, Colin Pillinger FRS and John Hayes FRS.

OGU Co-leader Professor Rich Pancost added: “These world-leading scientists cut their teeth and built our discipline on the analytical rigour required to analyse these precious samples.

“Colin Pillinger, of course, went on to become one of the luminaries of UK planetary science.

“And John Hayes supervised my own PhD supervisor, the two of them developing some of the new techniques in the 1990s that have been the foundation of my career. In short, the impact of our participation in Apollo 11 was vast and far-reaching.”

Judith Pillinger, Colin’s widow, recounts the significance of the Apollo programme reflecting how so many personal life stories were influenced by samples of the Moon on Earth.

She said: “I joined the OGU working in the lab adjacent to the clean room where a young post doc was processing the lunar material for analysis.

“Colin and I became life time partners, his early ‘journey into space’ leading to an outstanding research career which saw his ultimate experiment to search for signs of extra-terrestrial life, the UK-led Beagle 2, land on Mars in 2003.

“In his later years he returned to studying the Moon and left a legacy of scientists worldwide carrying on the Apollo story.

“Little did Colin know as he strove to understand the chemistry of the Moon that, in 2010, Neil Armstrong would put his arm around him saying ‘You analysed some of my samples’.”

A special documentary, When the Moon came to Bristol airs on BBC Radio Bristol tomorrow at 9am (Saturday 20 July) presented by University of Bristol PhD student Tim Gregory. The programme will be available to listen again on the BBC iPlayer following its broadcast.