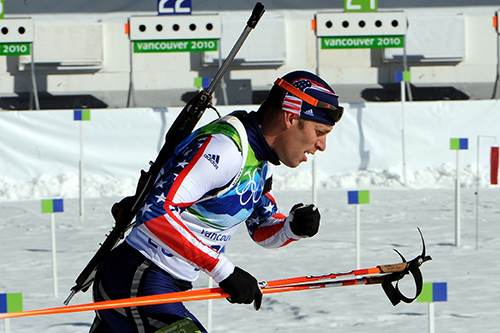 Top male biathletes are more attractive to the opposite sex, according to a new study by scientists at the universities of Exeter and Bristol.

This result, say the team, fits with the theory that women have an evolved preference for more athletic men, who in past times were better able to provide for their families.

The scientists asked people to rate passport-style photos of 156 men and women who take part in the biathlon World Cup, a combination of cross-country skiing and rifle shooting.

Male biathletes with a higher career-best score were judged as physically more attractive by the opposite sex, but there was no such relationship for female biathletes.

The study, published in the journal Behavioral Ecology, is the first to show such a difference between perceptions of male and female athletes.

Dr Tim Fawcett of the University of Exeter, who led the research, said: "Previous studies had found that faster Tour de France cyclists and better NFL quarterbacks are more attractive, but they ignored female sports.

"In the biathlon, where both sexes compete, our data show that this relationship holds for men but not for women.

"This sex difference is predicted by evolutionary theories, based on the idea that in ancestral populations it was probably men who did most of the hunting."

The results imply that sporting success is linked to something visible in the photos that women find attractive.

Andy Radford, Professor of Behavioural Ecology at the University of Bristol and co-author of the study, added: "Successful athletes might have happier, more confident expressions, and there’s also some evidence that men with wider faces are more physically dominant.

"But in our study, women did not prefer men who were smiling or had wider faces.

"Further work is needed to pinpoint what makes the top-performing men more attractive."

The study highlights how our evolutionary history has shaped the way we respond to other people's appearances.

Dr Fawcett explained: "Although a preference for more athletic men doesn’t have the same relevance in today's society, it's fascinating to discover how sensitive we are to subtle differences in the way people look, and how this might be linked to their abilities and success."

The biathletes rated as most attractive were US Olympian Lowell Bailey and Czech Olympian Eva Puskarčíková.