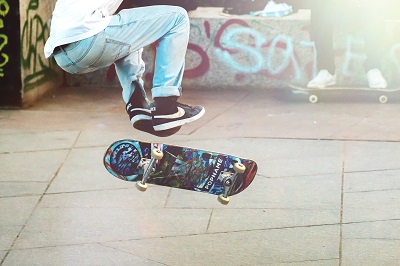 A fresh look by the University of Bristol at how teenagers are affected by their asthma, eczema or obesity has some reassuring findings published in BMJ Open today (Monday 21 January).

Researchers supported by the NIHR Bristol Biomedical Research Centre found that both girls and boys at the ages of 12, 14 and 16 did not experience different levels of active or sedentary time if they had asthma or eczema compared to their peers.  Teenagers who were obese however, were less active and also had increased periods of inactivity.

Using data from 6473 teenagers wearing accelerometers at the three age points, clinical reports of asthma or eczema together with weight and height measurements, this study is the first of its kind using data over time to assess the impact of the conditions on activity levels.  All the information was taken from Bristol’s Children of the 90s study that recruited 14,500 pregnant women in the early 1990s.

With an estimated 20 per cent of children diagnosed with eczema, 9 per cent with asthma and 20 per cent found to be obese by the age of eleven in the UK it was thought that the long-term conditions impacted not just quality of life but physical activity.   Although the research did not examine differing severity of asthma and eczema there can now be some reassurance that the conditions are not necessarily a barrier to a healthy lifestyle and that tailored fitness plans are not needed.

Professor Russ Jago from the Centre for Exercise, Nutrition and Health Sciences at the University of Bristol said:

“Our findings should reassure parents that although their teenagers are facing long-term conditions such as asthma and eczema we didn’t find any reduced physical activity.   The young people studied, both girls and boys, kept the same levels of moderate to vigorous activity as their peers who did not have the conditions.

“Thanks to the Children of the 90s data we were able to look at young people over a long period of time using many different tests which makes our study question the perception that asthma and eczema impacts quality of life in this way.

“The next steps would be to examine any differences in activity for young people with mild or severe asthma or eczema.”

Based at the University of Bristol, Children of the 90s, also known as the Avon Longitudinal Study of Parents and Children (ALSPAC), is a long-term health-research project that enrolled more than 14,000 pregnant women in 1991 and 1992. It has been following the health and development of the parents (ALSPAC-G0) and their children (ALSPAC-G1) in detail ever since and is currently recruiting the children of those original children into the study (ALSPAC-G2). It receives core funding from the Medical Research Council, the Wellcome Trust and the University of Bristol. Find out more at www.childrenofthe90s.ac.uk.