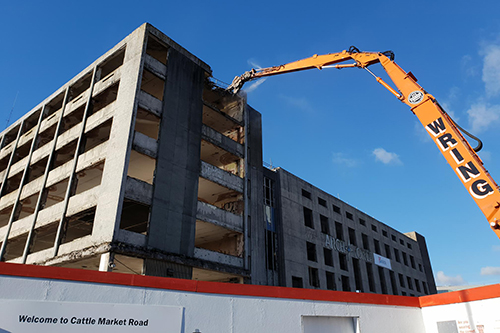 Demolition of the former Royal Mail sorting office gets underway 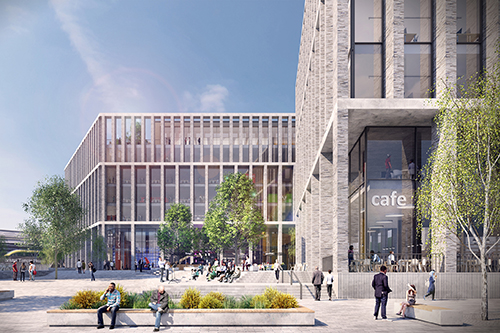 An artists' impression of how the new enterprise campus will look

Demolition of Bristol’s most prominent derelict building got underway today – a key and historic milestone in the creation of the University of Bristol’s new campus.

The former sorting office, on Cattle Market Road next to Bristol Temple Meads Station, is widely regarded as one of the city's biggest eyesores since the Royal Mail moved its operation to Filton in 1997.

Its removal will make way for the development of the University’s brand new Temple Quarter Enterprise Campus, as part of the ongoing transformation of the Temple Quarter district.

To mark the start of the staged demolition, the University of Bristol has released a film featuring a poem written by Temple Quarter Enterprise Campus poet-in-residence Vanessa Kisuule. Entitled 'Brick Me', the poem captures the history of the site.

Vanessa is one of three artists-in-residence working with local communities on projects to celebrate the regeneration of the Temple Quarter area and document its heritage.

The prominent site has been a Royal Mail sorting office, a cattle market and a colour works factory, exporting carpets and floor cloths around the world, and an 1830s cholera burial ground from the former St Peter's Workhouse.

The City Council purchased the sorting office site in 2015 and, after securing an agreement for its sale to the University in 2017, began enabling works in February last year.

Contractors Kier have been working hard to strip out the building and prepare the site. They are now ready to begin a staged demolition using heavy machinery, in a process that is expected to be complete within six months.

Professor Hugh Brady, Vice-Chancellor and President of the University of Bristol, said: "The start of demolition is a major historical milestone for both the University and the city. The campus will help transform this previously neglected area into a vibrant new quarter of the city, which will benefit everyone.

"The campus offers an opportunity to connect with our communities in new ways, offering new public spaces, facilities and educational opportunities. We’re looking forward to working with businesses, government, local organisations and communities as plans for the campus take shape."

The University plans to create an open and welcoming campus on the seven-acre site, which will span both the sorting office plot and part of neighbouring Temple Island.

It will provide teaching, research and innovation space for some 800 staff, external partners and 3,000 students, with accommodation on site for up to 1,500 undergraduates and postgraduates.

The campus, which aims to welcome its first students in 2022, will be at the forefront of digital and management research, education, skills and innovation.

Members of the public will be encouraged to use the new public spaces on the campus, including the waterfront, cafes and shops, and well-connected walking and cycling routes.

Mayor of Bristol, Marvin Rees said: "This is a really exciting day for Bristol and the Temple Quarter. This eyesore building has been a blight on the landscape for too long – its demolition will be the start of a new chapter for the area.

"The redevelopment of the Temple Quarter will help deliver the gateway the city deserves, as well as regenerating the area with thousands of new homes and jobs.

"As well as creating a brand new university campus, the clearance of this site will unlock new routes to the station and open up vital links between the East of Bristol and the centre.

"I'm proud that this has been brought about by decisive action on the part of the council and through close working with our partners - it shows what we can achieve when we work together. The development of this site is a big step forward towards our goal of creating an inclusive new city district which will offer new opportunities for the benefit of everyone in Bristol."

The Minister for Local Growth, Jake Berry, said: "The Government is committed to boosting economic growth across the whole of the UK.

"These demolition works are part of a major £16 million investment from the Local Growth Fund, which will benefit the people of Bristol and the wider West of England region by acting as a catalyst for the ongoing regeneration and transformation of Temple Quarter and the construction of the new University of Bristol Temple Quarter Enterprise Campus which will include the Quantum Technologies Innovation Centre."

Vice chair of the West of England LEP, Katharine Finn, said: "It's great to see the demolition works underway, as part of our wider investment into the Temple Quarter Enterprise Zone. I look forward to seeing the development of the new enterprise campus, a home for digital innovation and research for the University of Bristol."

Once demolition is completed, Kier will complete a final package of work to prepare the site before it is transferred over to the University to begin construction.