New insights into what Neolithic people ate in southeastern Europe 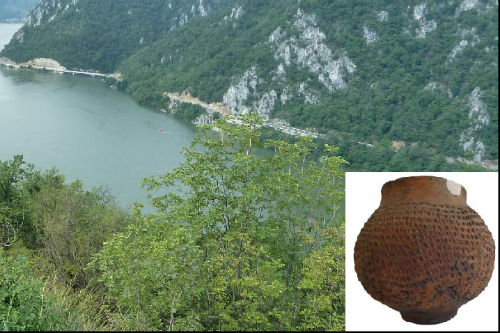 New research, led by the University of Bristol, has shed new light on the eating habits of Neolithic people living in southeastern Europe using food residues from pottery extracts dating back more than 8,000 years.

With the dawn of the Neolithic age, farming became established across Europe and people turned their back on aquatic resources, a food source more typical of the earlier Mesolithic period, instead preferring to eat meat and dairy products from domesticated animals.

The research, published today in the journal Royal Society Proceedings B, reveals that people living in the Iron Gates region of the Danube continued regular fish-processing, whereas pottery extracts previously examined from hundreds of sherds elsewhere in Europe show that meat and dairy was the main food source in pots.

This region is archaeologically very important because the sites document Late Mesolithic forager settlements and the first appearance of Neolithic culture, which is spreading up through Europe illustrated by the first appearances of pottery, domesticated plants and animals and different burial styles.

The Iron Gates is a unique landscape on the border between modern-day Romania and Serbia where the Danube cuts through the junction of the Balkan and Carpathian mountain chains. It provided a rich wild aquatic resource base for prehistoric hunter-fisher-foragers during the Late Glacial and early Holocene.

As farming spread from south west Asia into Europe, prehistoric diets ultimately transformed towards a diet based upon domesticated plants and animals. However, in this region, evidence has suggested that wild resources may have continued to be important well into the early Neolithic.

This research involved analysis of organic residues surviving in the fabric of 8,000-year-old Neolithic pottery excavated from sites on the banks of the Danube.

Chemical analyses allowed scientists to directly see what kinds of resources were being prepared in these newly-appearing pots and compare this with the way the same type of pottery was being used by farmers in the wider Balkans region.

Dr Lucy Cramp from the University of Bristol’s Department of Anthropology and Archaeology, led the research. She said: “The findings revealed that the majority of Neolithic pots analysed here were being used for processing fish or other aquatic resources.

“This is a significant contrast with an earlier study showing the same type of pottery in the surrounding region was being used for cattle, sheep or goat meat and dairy products.

“It is also completely different to nearly all other assemblages of Neolithic farmer-type pottery previously analysed from across Europe (nearly 1,000 residues) which also show predominantly terrestrial- based resources being prepared in cooking pots (cattle/sheep/goat, possibly also deer), even from locations near major rivers or the coast.”

The research team suggest that this unusual dietary/subsistence pattern may be for several reasons.

It is possible that farmers were attracted to this location by the impressive aquatic resources available including huge sturgeon which swam up the river from the Black Sea.

It may also be that Late Mesolithic dietary practices are continuing here, but now using new Neolithic pottery as a result of these early interactions between Mesolithic and Neolithic communities.