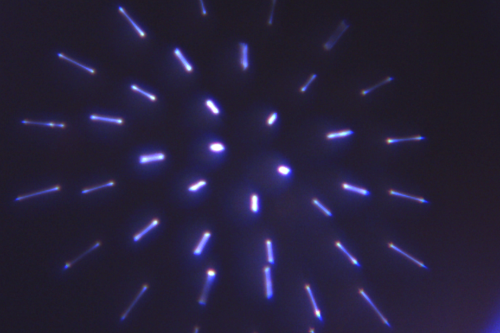 Using the new approach, clouds of aerosols droplets (e.g. 40 shown in the image) can be captured and manipulated, allowing a simulation of their environmental exposure. University of Bristol

The airborne transmission of diseases including the common cold, influenza and tuberculosis is something that affects everyone with an average sneeze or cough sending around 100,000 contagious germs into the air at speeds of up to 100 miles per hour.

New research led by scientists from the University of Bristol and published today in the Journal of the Royal Society Interface, outlines a new technique that, for the first time, examines directly the environmental factors that control the transmission of disease to the level of a single aerosol particle and a single bacterium.

Aerosol droplets are a typical route for the transport of pathogens, such as bacteria and viruses, and the airborne transmission of disease.

The impact of environmental factors (such as relative humidity, temperature, atmospheric oxidants and the presence of light) on the viability and infectivity of pathogens in aerosol droplets remains poorly understood.

For example, although the seasonal variation in influenza cases is known, the environmental factors determining the differences in airborne transmission of the virus is not well understood.

To help understand this process better, scientists have established a novel approach for forming aerosol droplets containing a specific number of bacteria, trapping a cloud of these droplets of exact known population and simulating their environmental exposure over a time from five seconds to several days.

The aerosol droplets are then gently sampled onto a surface to determine how many bacteria have survived their time in the aerosol phase.

The study reports on the benchmarking of this new approach, demonstrating the many advantages over conventional techniques, which include introducing large populations of droplets to large rotating drums or capturing droplets on spiders’ webs.

Not only can measurements be made down to the single bacterium/single droplet level requiring very little quantity of aerosol (picolitres), but high time resolution (one second) measurements of viability can be made, allowing the first quantitative studies of the influence of dynamic factors transforming the aerosol (for example evaporation, condensation) on viability.

For example, the study shows that during evaporation of droplets, the concentration of typical salts can rise way beyond their solubility limit, placing considerable osmotic stress on the bacteria and reducing viability.

The research's lead authors are Professor Jonathan Reid and Dr Allen Haddrell from the University of Bristol’s School of Chemistry.

Professor Reid said: “This new technique offers the eventual prospect of allowing refined measurements to improve our understanding of the transmission of many airborne diseases including tuberculosis, the influenza virus, and foot and mouth disease.”

‘Assessing the Airborne Survival of Bacteria in Populations of Aerosol Droplets with a Novel Technology’ by M. Fernandez, R. Thomas, N. Garton, A. Hudson, A. Haddrell and J. Reid in Journal of the Royal Society Interface