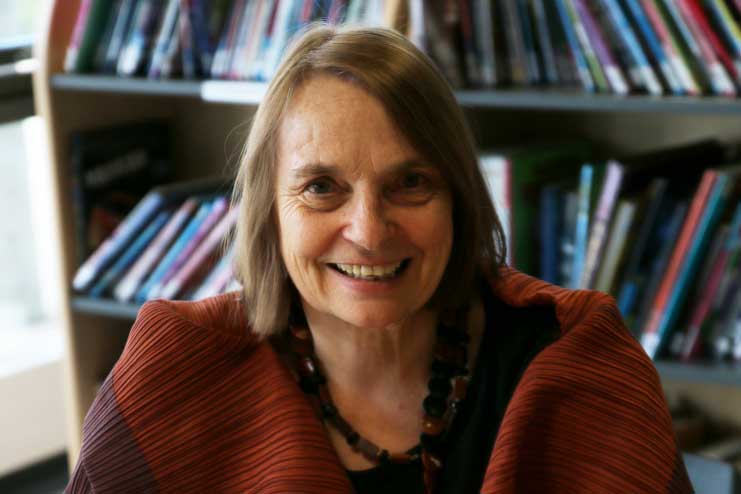 Rosamund Sutherland, Emeritus Professor and former Head of the School of Education, died on 26 January. Andrew Pollard leads this remembrance of an international mathematics educator who promoted social justice in the digital age.

Professor Rosamund Sutherland, who has died aged 72, was a specialist in the teaching and learning of mathematics and the application of new technologies in education.

Born in Birmingham in 1947, Ros was the daughter of Joan Hatfield (née Reynolds), a geography teacher, and Percy Hatfield, a physicist. The family moved to Cwmbran, South Wales, in 1953 and later to Raglan, where Ros spent her formative years. She was sometimes disturbed by the relative poverty of some of her classmates at primary school and was one of only two to pass the 11+. At Monmouth School for Girls, Ros flourished academically, particularly at Mathematics, and indelible impressions were left by the power of female friendship as she negotiated schooling and by the pleasures of ‘exploration’ – whether locally or on family holidays to Europe.

In 1965 Ros began a degree in Mathematics at the University of Bristol. In what was to become a hallmark of her approach to life, she combined work and pleasure through warm relationships. Puzzling assiduously over mathematical problems was combined with a social life centred on the Student Union with its bars, bands and opportunities for other activities. Ros met Ian on a computer programming course and they married in 1968.

Her first job was for Bristol Aerospace as a computer programmer, but she soon became a research assistant at the University while Ian completed a PhD. Ros and Ian’s children, Joanna and Andrew, were born in 1972 and 1974. Ros later reflected on the joys of motherhood, ‘being alongside children as they play and explore’ – and she was to put such observations of learning to good use in her later career. Having moved to Hertfordshire with the young family, Ros worked as a tutor for the Open University’s Foundation Mathematics degree and, later, as a lecturer in A-level Mathematics and Statistics at Borehamwood College of Further Education. This experience was her first practical encounter with young people with poor educational backgrounds seeking to learn mathematics – a challenge to which she would return many times.

Having developed a rapport with Professor Celia Hoyles at an OU summer school, a plan was hatched to apply for research funding for what became the Logo Mathematics Project – a study of how a computer programming language could be used to enhance mathematical understanding. Ros demonstrated her confidence and decisiveness by resigning her FE post before the outcome of the application was known. She had decided to become an academic researcher.

From 1983 until 1995, Ros was a member of the Mathematics, Statistics and Computing Department of the Institute of Education, University of London. Celia Hoyles writes: ‘Ros became a well-respected and much-loved colleague in the department, as well as across the Institute more generally. She reached out to other researchers across the institution, across the country and internationally. She was such an excellent collaborator, who always listened carefully to comments and suggestions, judging them not as personal criticisms but rather as a way of improving and learning together. Ros was the ultimate team player. She was just perfect as a researcher, colleague and friend.’

Joined also by Richard Noss as part of the Microworlds Project, Ros’s team developed new courses to help teachers embed digital technologies in their mathematics teaching. Many of these teachers not only transformed their practice but became leaders in the field. This was due in no small part to Ros’s ability to encourage, inspire and support classroom teachers, as well as to develop and implement research methodologies and practice. With Alison Wolf, Ros co-directed a curriculum development project on the use of spreadsheet materials by young people on engineering and technical courses in further education. This succession of projects shows Ros’s intellectual openness, team working and confidence in teachers. We also see the roots of what was to become part of a sophisticated theory about learning by ‘the person plus appropriate technological tools’.

Ros travelled widely and developed productive research collaborations and friendships in many countries, in particular Mexico, France and Chile. For example, Teresa Rojano writes from Mexico: ’Together we researched the processes of learning algebra using technology learning environments. Her deep knowledge of the role of the Logo environment in learning mathematics coalesced with the line of research on algebraic thinking that we had developed. Our projects showed that by using spreadsheets as tools, students of different ages and school levels could carry out activities that involved very powerful ideas in mathematics, such as generalization and infinite processes. In like manner, we collected evidence on how algebra-resistant secondary school pupils were able to succeed by performing activities with spreadsheets.’ From France, Nicolas Balacheff writes: ‘Rosamund’s research was deeply rooted in the field, working and researching with teachers, because the teacher is central, as she insisted. During her stay in Grenoble at the beginning of the 1990s, she didn’t just stay in the lab but worked in a French classroom. Her engagement at a theoretical level was always tightly associated with this practical immersion to better understand classrooms as complex systems where learning and teaching productively interact’.

In 1995 Ros returned to Bristol as one of three strategically appointed Chairs in Education – the other two being John Furlong and myself. We were recruited to lead a new phase in the development of the Graduate School of Education by promoting a ‘socio-cultural’ model of learning. We joined with Patricia Broadfoot and Guy Claxton to reconceptualize teaching and learning processes holistically – in social, cultural, psychological and contextual terms – and to draw colleagues into this endeavour. The Graduate School was restructured into complementary ‘centres’ to map the major dimensions of our overarching rationale: Ros provided exceptional leadership of her research centre, LKIT (Learning, Knowing and Information Technologies), and began to contextualise her ‘person plus’ insights with broader approaches to socio-cultural theory. It was an intellectually stimulating period: visits by James Wertsch, Barbara Rogoff, Gordon Wells, Vera John-Steiner and other luminaries of socio-cultural research were particular highlights, as was the appointment of Martin Hughes. Ros not only contributed to theoretical development but was also crucial in facilitating the relationships and processes that made everything possible. In due course, the 2001 Research Assessment Exercise strongly affirmed this collective initiative.

Ros’s expertise in mathematical learning was recognised in 2000 when she led a working group of the Royal Society/Joint Mathematical Council on the teaching of algebra in schools. Forging coherence from wide-ranging views of teachers, mathematicians and researchers, the report reversed the marginalization of algebra within the National Curriculum. At Bristol, Ros continued to develop her mathematics education research, working particularly with Laurinda Brown and, later, Alf Coles. In 2007, this culminated in an accessible, synoptic book, Teaching for Learning Mathematics. She chaired the Joint Mathematical Council from 2006 to 2009.

Ros’s insights on the role of digital tools in learning were further developed through collaboration, both with Sally Barnes and with international doctoral students whom she inducted into the academic world with great skill and generosity. Joining with John Furlong, Ruth Furlong and Keri Facer for the ScreenPlay project, Ros directed her attention to the ways in which young people use digital technologies in the home. She also won and led an even larger ESRC project, InterActive Education, focused on the design and evaluation of teaching, learning and digital technologies across a range of school subjects. Ros’s research teams were noted for their friendships, energy and success. Keri Facer writes: ‘Ros was the model of a collegial academic leader and mentor, demonstrating that the value of the work is so much more important than individual competition or disciplinary differences. She was a tremendous role model for the women who followed her – demonstrating every day that you can achieve real success while still being yourself’.

This capacity to develop intellectually enquiring and collaborative ways of working was affirmed by Ros’s international peers, and she was an executive member of two successive European Networks of Excellence in technology-enhanced learning: Kaleidoscope and STELLAR. The latter produced, under Ros’s leadership, a ‘Vision and Strategy’ for the future (2012) and led to a state-of-the-art overview of what is known about technology-enhanced learning (2017).

Ros was Head of the Graduate School of Education at Bristol from 2003 to 2006, and again for a period in 2014, ably supported for much of the time by Mary O’Connell. She not only generated bold and principled strategies but used her energy and drive both to motivate her colleagues and to negotiate effectively within the University. The renovation and contemporary décor of the present School of Education, funding for which she achieved almost single-handedly, symbolises her future-oriented vision.

However, perhaps Ros’s greatest legacy was to the city of Bristol itself.

Despite its overall affluence and vitality, Bristol is a divided city. Parts of South Bristol suffer from considerable poverty and many of its state schools have struggled to meet contemporary expectations. To the north, built on centuries of wealth, Bristol has one of the highest concentrations of independent schools in the UK. In 2006 the University was approached to co-sponsor, with the Society of Merchant Venturers, a new South Bristol academy. Ros was shocked at the condition of the predecessor school, at the poverty within the community and at the realisation that, each year, over 80% of students failed GCSE Mathematics and English. How, she asked, could this be happening in contemporary Britain? Working closely with Denis Burn, chair of the academy trust (and later of the University of Bristol Council), she began a phase of intense activity to interrupt taken-for-granted relationships between key city institutions and build new, co-operative strategies to tackle educational inequality. Among the most significant of these was the establishment of the South Bristol Youth charity, a collaboration between schools, both city universities and a wide range of supporters and delivery partners. Each of the programmes, such as Unlocking Potential, Discover Maths and Future Quest, has evidence-informed common elements and is now recording significant annual impacts on the self-confidence and achievements of young people from South Bristol.

In her 2014 book, Education and Social Justice in a Digital Age, Ros held firm to the importance of academic forms of knowledge – forms unlikely to be learned out-of-school. Among the final research projects in which Ros was involved was an evaluation of the South Bristol Youth Ambitions Programme, working with Jo Rose and long-term collaborators Wan Yee and Pat Triggs. Their hard-hitting report provides clear recommendations on how post-16 and higher educational inequalities can be tackled and argues that organisations across the city all have a role to play. Another of her final projects was the Future Brunels Programmewhich encourages young people into careers in science and engineering. As a trustee of the SS Great Britain Trust, Ros played a pivotal role in this. It is no wonder that flags on the great ship were flown at half-mast when news broke of Ros’s death.

The work to which Ros committed herself towards the end of her life shows us new ways forward in times when inequalities still disfigure Britain – moving beyond mere outcome measurement to practical, formative support of learning; and beyond institutional isolation and competition to practical, evidence-informed forms of co-operation.

Ros Sutherland looked inexorably to the future. She was a pioneer in demonstrating how students’ school learning can surpass expectations with the support of expert teachers and digital technologies. She explored and piloted new ways in which the institutions of a city can, through co-operation, begin to overcome educational inequality.