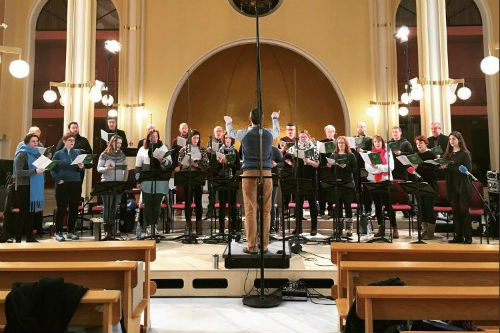 The world premiere of a new piece of choral music composed by two academics from the University of Bristol has been broadcast on BBC Radio 3.

Mass in Troubled Times takes its title from Haydn’s Missa in Angustiis (Hob, XXII/11), composed in 1798 during the Napoleonic Wars and often known as the Nelson Mass.

No direct connection is intended beyond the shared title, but the present work may be seen as a modern response to Haydn’s masterpiece, written against a background of even greater global uncertainty.

Professor D’Costa, has devised a complex text, drawing on multiple sources across five languages. Underpinning the entire structure is the Ordinary of the Mass (with added Introit).

Only seventeen lines of text from the Mass itself are used. These lines are counterpointed with original poems unfolding a fictional narrative of a refugee father and daughter, fleeing their war-torn country by sea.

Alongside these elements are texts in three Middle Eastern languages a Twitter hashtag in Turkish from 2015 concerning the all-too-real fate of one Syrian refugee child, a passage from the Syriac Orthodox Church Liturgy of the Divine Mysteries and two passages in Arabic from the Qu’ran: the first part of the Shahada (the Muslim profession of faith) and a quotation from the Surah al-Waqi'ah.

The musical setting reflects the diversity of the texts. The Latin text of the Mass is treated in a largely polyphonic style employing a range of imitative devices. The English poems are set simply and directly with a concern for textual clarity (an exception to this occurring in the central Credo where the setting is allowed to develop into an extended lyrical episode).

The Middle Eastern texts are set in a manner that does not seek to conceal their differences from the Western texts. The (secular) Turkish words are used in a textural manner in the Introitus and are complemented by a similar setting of (sacred) Latin words in final Agnus Dei. The sacred Syriac and Arabic texts are set in a monodic style.

Professor Pickard said: “This was a simply stunning performance, probably the best premiere I have ever had. I am immensely grateful to the BBC Singers and their conductor Andrew Griffiths for their brilliance and dedication.”

To listen to the performance on the BBCiplayer – click here. The performance of Mass in Troubled Times can be heard during the first hour of the broadcast.