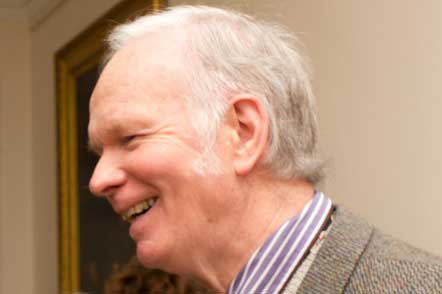 David Birdsall, long-serving member of the Department of Aerospace Engineering (1968-2002) and Head of Department 1999-2002, died on 29 January after a long illness. His colleagues and former students offer this remembrance.

After reading for a BASc in Mechanical Engineering at the University of British Columbia, David came to Bristol in the early 1960s on an Athlone Fellowship to study for a PhD, supervised by Professor Roderick Collar CBE and Dr Alan Simpson. He completed this in 1965, contributing valuable work on the effects of structural non-linearities on flutter. It was while studying for his PhD that David and Myra met, the latter then serving as Secretary to the Professor of Theoretical Mechanics (WM Shepherd), and they married in 1965.

David and Myra then returned to his native Canada and a job at the aircraft manufacturer, Canadair Ltd, in Montreal. In July 1968 he accepted an invitation to join the University of Bristol as a lecturer in the Department of Aeronautical Engineering. This was the start of a long association with the University.

David quickly established himself as a highly regarded member of academic staff, much respected and deeply appreciated by undergraduates, his postgraduate students and colleagues alike. His attitude to students is legendary in the Department: he related to each and every one of them with extreme patience, helpfulness and concern; he was selflessly devoted to maximising their academic and life achievements – and was renowned for knowing the names of all the students within weeks of their arrival in first year! Even now, on encountering any of the generation of aeronautical engineers who benefitted from his tutelage, without fail, they ask after David – revealing their deep appreciation for the boundless effort he expended in imparting to them knowledge, understanding and sound judgement in a wide range of engineering concepts.

One of David’s early postgraduate students, Bob Stirling (whose studies culminated in a PhD on aircraft turbulence response in 1976), interacted with David in various capacities, and his words encapsulate the sentiments of all those who were taught by or worked with him: “He was always very supportive and always found time to help with his insightful views, including helping with any personal issues that can arise from time to time. I kept in touch over the years and was always struck with his drive to teach and support his students – a natural teacher and a great asset to the University. I came back into the University in 1980 as a Research Fellow and again benefitted from David’s support and technical capabilities. I have an enduring memory of David as a great educator and a reliable friend in all ways.”

Air Commodore Nigel Wood CBE, who graduated from the Department in 1971 and who had been destined to become the first British astronaut until the cancellation of the NASA Space Shuttle programme in 1986, stated in 2016 that “I was lucky to have Dr David Birdsall as my tutor. He encouraged us to look beyond the confines of the syllabus and the limitations of our work."

David had a keen understanding of the challenges facing those arriving in Bristol from other countries, as students or as staff. He went out of his way to ensure that they were welcomed and settled in quickly: nothing was too much effort for him in providing whatever support was needed.

David was promoted to Senior Lecturer in 1985 and served as Head of Department from August 1999 until July 2002. He then retired but returned as a Visiting Fellow until 2010, allowing further cohorts of aerospace students to benefit from his years of experience in engineering education. During his years in the Department, he taught aeroelasticity, flight mechanics and control, aircraft design and performance. He created comprehensive lecture notes, as effective as any textbook, and co-authored the well-respected Aircraft Performance text with Professor W Austyn Mair of the University of Cambridge, published by Cambridge University Press in 1992.

However, David’s contributions were far wider than teaching alone. He undertook a variety of roles in the Department, including Admissions Tutor; and he was instrumental in establishing the four-year Masters in Engineering (MEng) programme in the 1990s, as well as the aircraft design project with Airbus – an educational collaboration with our local aerospace industry which has since expanded and which remains a cornerstone of our degree programmes to this day. David also played a key role in the setting up and running of the Integrated Graduate Development Scheme – later renamed Continuing Professional Development in Aerospace – to provide a unique set of masters-level programmes for engineers in industry (in partnership with the University of the West of England).

He was a Member of the Royal Aeronautical Society and served for many years on its Accreditation Committee. He also contributed significantly to the regular accreditation of the Department’s degree programmes over the years. Indeed, during his 40+ years with the University, David played an enormous role in the shaping of the programmes while never compromising his dedication to the support and development of students and colleagues. He was also involved in the administrative side of the Faculty and was a member of the University Court after retirement. David was an alumnus of Wills Hall: he was a member of the Junior Common Room Committee and active in the Sunday chapel services; and he served as Wills Hall Association Membership Secretary from 1969 to 1983 and as Secretary from 1975 to 2004.

His interests outside the University included woodwork (he made much of his own furniture), music (he and Myra were regulars at the classical concerts at Colston Hall) and theology: it has been said that in his later years he read more of Myra’s theology books than he read on aeronautics.

David will be greatly missed by all those in the University of Bristol community who encountered him, whether as one of his peers, a student, tutee or colleague.